Eldorado is Not Your Ordinary General Store 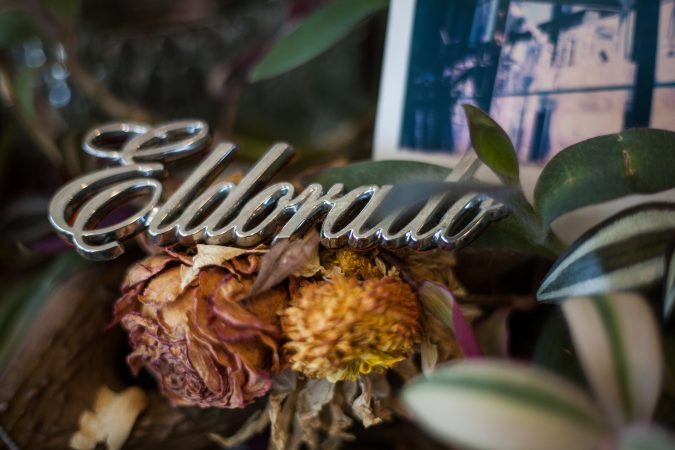 This seems to be the case for Erin Gayle of Eldorado General Store. After college, she moved to New York to pursue a career in advertising before becoming disillusioned and quitting her job in corporate America to move to LA where she “spent a lot of time reflecting on the beach.” Somewhere the idea to start a jewelry company in LA turned into her returning to Detroit to open a boutique. “I was completely disillusioned when someone said I’d have to mass produce and manufacture my jewelry in China to turn a profit.”

Instead of investing in cheaply produced goods, she created a platform for people to think about their relationship to the goods around them. Eldorado is not a vintage store. Salvaged items are displayed beside handmade ones in a move that imbues sacredness. The goal of Eldorado, she tells me time and again, is for people to find something that will be their thing—their favorite dress or go-to earrings, the favorite mug they drink from every morning. It’s about curating objects as opposed to selling items that will end up in someone’s closet or, realistically, re-gifted. It’s a place for seeing things in a new light.

Erin and I met nearly 5 years ago when we were both building things. She had recently opened her doors to the public, and I wandered into her shop, offering her a chicken sandwich from the food truck I operated down the street. In the years since we have become close friends and together have experienced great changes to the city and our businesses. It is exciting to share these tips of hers, as I have witnessed their power in action. Eldorado has thrived in a time and place where many claimed retail to be impossible. Similarly, these words have carried me through my own metamorphosis—of taking a food truck into a restaurant and onto new journeys.

In the words of every yoga instructor everywhere, we have all the answers. Tap into your intuition. Erin relies on tarot, crystals, meditation, and movement. What works for you? Take time to discover the tools and practices to connect with your body, so you can listen to what it has to say. “For some it’s yoga. For me it’s dance.” Look to nature for assistance. “I’m always drawn to nature, I’m always picking up rocks. Everything has a vibration, and we’re always intuitively drawn to things we need.”

In the words of Rupaul: “If you don’t love yourself, how the hell you gonna love somebody else?”

Love starts when you believe you deserve a life worth living and knowing and trusting you are capable of manifesting it. Reprogram your mind. Become big thoughts. All those years of not good enough speak—out! We lean into vigorous exercise and a good therapist. But, it’s in you.

Keywords: to you. For most this is monetary based. When Erin took time to think about it, she realized she defines wealth as “living a life of freedom, surrounded by people I love, and finding a partner who is my soul mate.” Define it. And let it be your compass.

Remember that advertising background? Be your own brand. Floyd makes furniture. Tushy makes bidets. And you do whatever it is your do. Erin implores us to ask “What do you believe in? What do you support?” No matter how many sentences it takes, figure it out and make sure everything in your life aligns with this mission.

Find your passion and follow it to the ends of the earth.

You’re listening to yourself. You’re loving yourself. You’ve defined wealth and your personal mission. Now, what are you passionate about, and how are you going to share it with others?

Everything. “Taking notes, making lists, documenting your thoughts and feelings. Those are really great roadmaps and tools for your future self,” says Erin.

The idea for Eldorado came from a note to herself she found while cleaning her childhood bedroom. Among a list of goals by eighteen-year-old Erin—many of which she had achieved—was written “open a boutique by the time I’m forty.”

7. Surround yourself with people who believe in, nurture, and inspire you

“It’s always important to have a support group,” says Erin. “Especially when you are trying to create a life worth living.”

Which is not to say that you should cut out your mother and her negative talk from your life—but do try to keep that voice to a whisper. In another room. And remember you can choose your friends. Erin chose Detroit as a city where she could be around like-minded people “following their passions and living their dreams.”

8. Place yourself in an environment that allows you to succeed

Swim with the current. “If things aren’t clicking into place, maybe you need to change your environment.” Amen, Erin! Abandon the project. Start a new one. Recently when the van she and her partner, Chris, had spent months of time, energy, and money transforming into a tiny home broke down in the middle of nowhere, they took it in stride—”put everything in perspective. If something doesn’t work out, the Universe is making space for something else.”

When she’s having a bad day, Erin takes to her garden or goes for a hike—”a complete game changer.”

“When you’re in nature you start to understand your role on this planet.”

Take a walk on Belle Isle. Invest in house plants. Take a bath and pretend it’s the ocean, if you must.

When Erin opened Eldorado she “was overwhelmed with the amount of people who wanted to help.” Sometimes with physical labor. A tour of the shop reveals a narrative of collaboration where people, often strangers, lent a hand—a clothing rack, a table, planters. It’s also as simple as sharing the story. More than social media, Eldorado has grown through personal connection—friends sending in friends sending in journalists sending in fellow business owners with chicken sandwiches.

12. Travel, Explore, get out of your comfort zone

“Every interaction is an opportunity for knowledge and connection.”