Two Men, a Plane, a Field, Detroit Artists, Covid-19, and a Dream

While the World is at a Standstill, “…A Plane With no Engines Just Seemed to Really Embody That.” 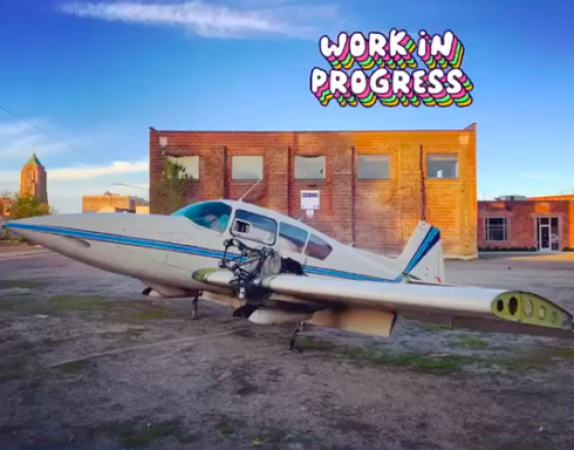 A five seater airplane sits abandoned in New Center. Covered with lines of graffiti, one could compare it with the Japanese art of mending pottery with gold called Kintsugi. There is a thin line, however, between the artistic style of Kintsugi and the abandoned airplane in New Center.

This line, maybe instead of gold, is an eye catching, iridescent opalite, and through its rainbow of colors, Detroit shines through. The question remains, however, how did a 1964 Piper Aztec find itself parked, engineless, in the middle of the city?

It was in a Nevada hot spring, a few days prior to Burning Man 1999, where kinetic and robotic artist Ryan C. Doyle and Mensa member, software engineer Bill Carson met. Both there for the event, equipped with Mad Maxian vehicles and outfits, the two sparked a friendship.

Doyle remembers vividly his amazement with Carson’s set of wheels. Custom done by his father, William Carson, the 1930s Dodge was decked out and converted into an RV. It exhibited the art of taking something old and piecing it into something new, a style Doyle resonated with in his own craft.

Over the years the two stayed in contact, and Doyle soon came to find out the 1930s Dodge wasn’t the only thing William Carson had tinkered with. Fascinated by things of the sort, the senior Carson had a corporation based in all things aviation, and had even acquired his own airplane, a 1964 Piper Aztec, that he flew with his son many times.

Neither Doyle or Bill Carson lived in Detroit at the time of their meeting, but after a while they both found themselves living in the Metro area. Doyle moved from out of state, and Bill Carson returned to care for his terminally ill father.

The plane was always supposed to be flown again, but some things just don’t turn out the way we think they will. Near the end of 2019, Bill Carson came to realize the definiteness of the plane’s long term grounding. 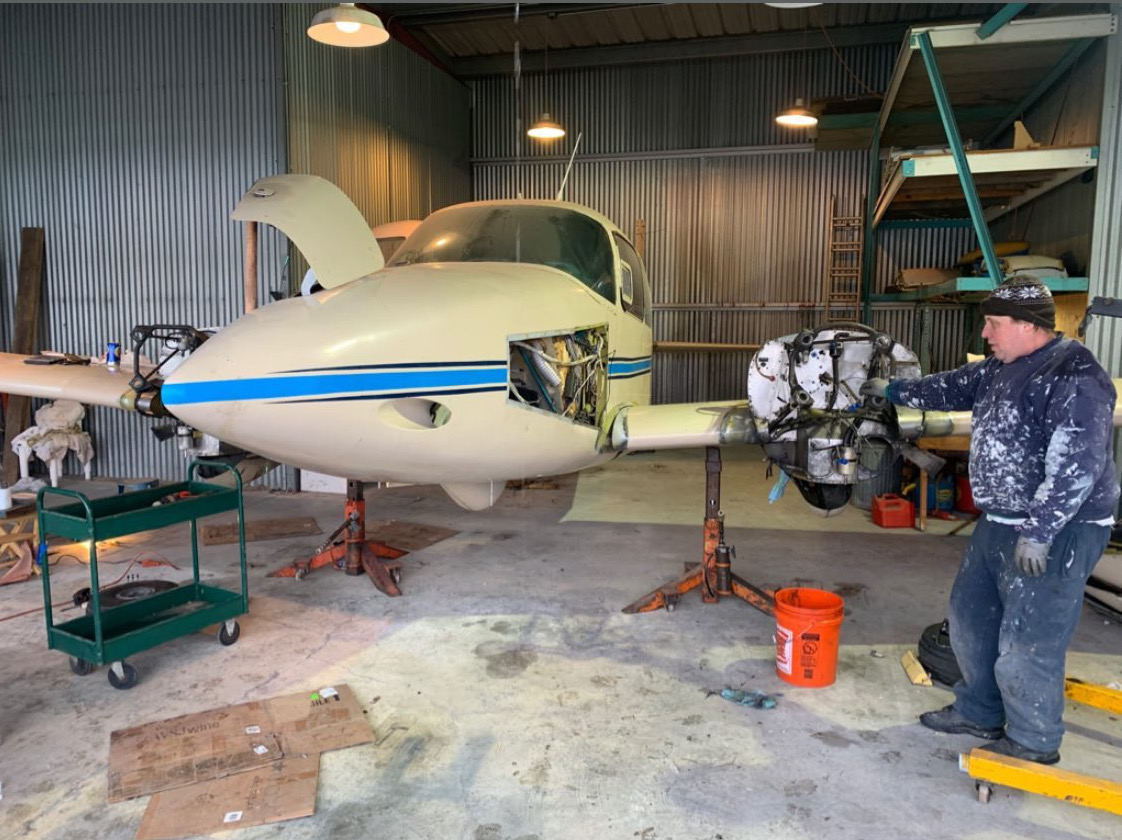 BILL CARSON AND THE AZTEC

It seemed around that same time the hanger in Troy, where the Aztec had been for years, came to these terms as well. They soon asked for its removal.

Carson called on Doyle to aid in the task to move it. They found out the engines would sell for more than the plane itself, so the two pulled out the engines for Carson to sell. As for the body of the plane, well, perhaps Carson was thinking of the 1930s Dodge. Perhaps the idea of mimicking the Kintsugi theory behind his dad’s style appealed to him more than ever. So, it was decided Doyle would take the plane, and coax it into something new in his own way.

It isn’t that it’s necessarily hard to transport a five seater airplane, it’s just that five seater airplanes are big. Transport took place late on a Sunday night in January 2020, and was spread out over two trips—one for the wings, and one for the body, fuselage, with the tail still on it. Doyle recounts the trip with a chuckle, “While we were driving down Woodward, it was about 12 feet wide in the back!”

When the Aztec was settled safe and sound in Doyle’s studio, he knew what he wanted to do with it. But first, he had to get the funding for it. “Maybe it’s hanging,” says Doyle, recounting his plans of turning it into a flight simulator, “maybe it’s got like different sound effects, projections, and video screens.”

Of course, it wasn’t long before Covid-19 lockdowns spanned far and wide, and funding for artists was stretched thin. Doyle soon came to the realization that either his plan needed to change, or the plane would sit in storage for longer. 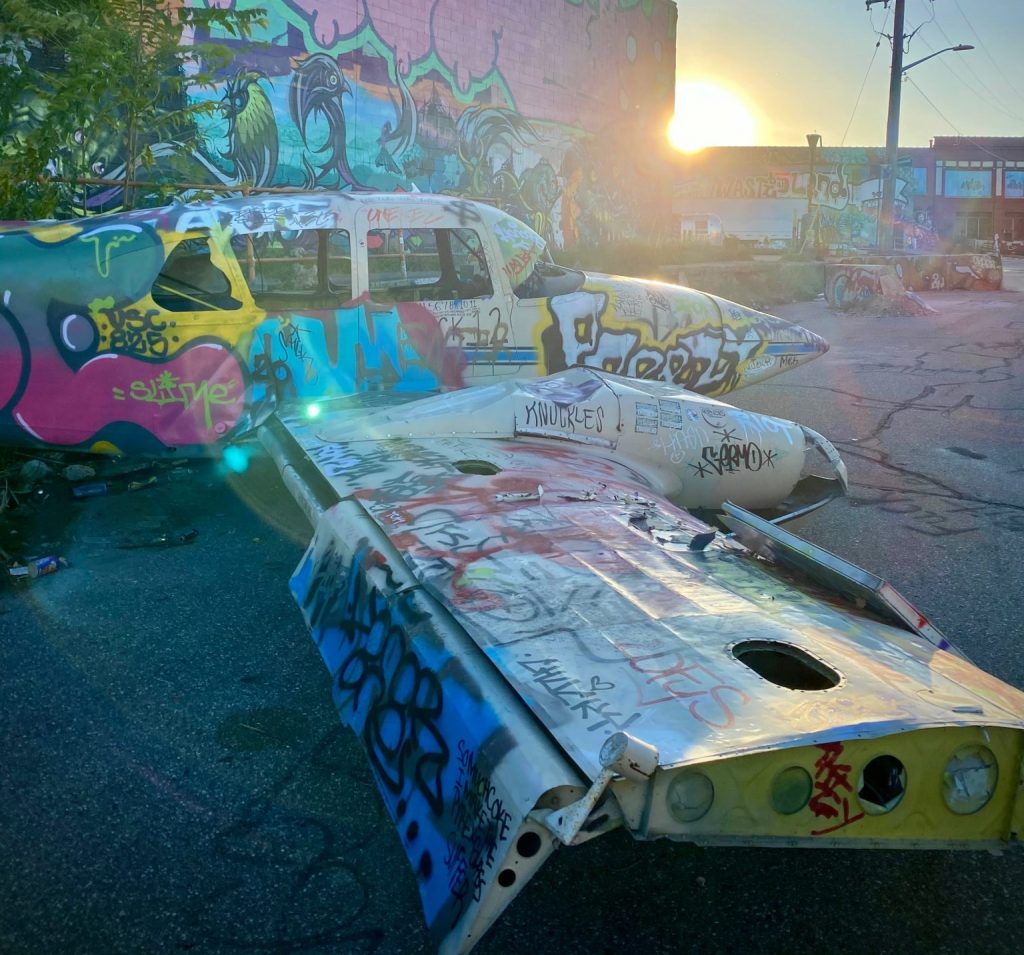 It was early May when the decision was finally made. “This could just be set up and be a cool place for people to come and hang out,” Doyle says, “imagine they are taking off.” He came to realize the time we were all in held some sort of resonance with the Aztec. No one felt like they had any lift or momentum, people were scrambling just to make ends meet, and no end of the pandemic was in sight. The world is still turning, but there was no movement. Doyle continues, “…A plane with no engines just seemed to really embody that.”

Doyle’s new idea may not have been a total reformation project, nor was it finessing the plane back together with gold. But, if you look close, that decision may just be where the opalite began to cross stitch its way across the plane.

On May 15th, the new plan was actualized. The Aztec was moved out from Doyle’s studio and pieced together on the lawn for the community to explore and experience. Excited, Doyle sent a picture to Bill Carson. “I guess Bill showed his dad,” Doyle recounts. “…His dad was really sick and was in and out of it, the next day he passed on. It felt kind of cosmic—something got me to put it up the night before.” He pauses, seeming to ask himself a question that may never be answered, “Does that mean something?”

According to Doyle, the attention by the city was almost immediate. Music videos were being filmed with the Aztec in the background, graduation photos taken with a grad leaning against a wing, even Instagram posts and TikToks were spreading rapidly. As months passed, and BLM protests surged, it was also used as a billboard for the movement.

It was a few months before the rainbow graffiti took to it like a new skin. Doyle explains that when the plane was first put out he was hesitant for this next step, for Detroiters to take it to this next level. The graffiti, he knew, would be the sealant for the Aztec’s future.

He was met again with a crossroads. Should he contact specific artists to control this “new skin”? Or should he just offer it up to the community once more, and let those interested take part? It was the latter, he finally decided, that would suit the plane the best, and the latter that inspired him the most. When he told a friend he wanted the graffiti community to make their mark in their own way, the word spread like wildfire. “It just got hosed down [painted] right away,” Doyle says, an awed air to his tone.

In late August the plane moved one final time. This time, however, it moved only a few hundred feet away. Doyle remembers his thoughts as he set it up in its new location, “If I just lean the wing up on the curb, I could turn this into a more interactive amusement thing for the skateboarders.” And just like that, skate marks embedded themselves into the Aztec’s new identity. 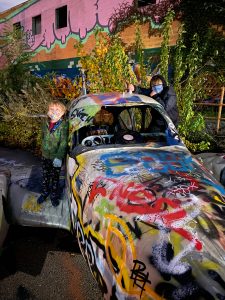 HOLDEN NAIMI AND ASKEL ATOMIQUE DOYLE WITH THE PIPER AZTEC

Being handed a large piece of equipment like an airplane makes one question if the right artistic option was taken. “Could I have exploited those things and had a more marketable thing?” asks Doyle, “Yeah, I could have waited and not shown it during Covid. But I don’t think I made the wrong decision by making it available to the people.”

In providing some distraction during a hard year like 2020, and without the need to pay to participate, people were able to simply experience it. “That’s what made it cool for me. Maybe not as cool as being fully robotic and hanging from the ceiling in a museum,” Doyle pauses and a smile spreads through his voice as he continues, “but maybe cooler.”

The 1964 Piper Aztec may not be exactly as it was once hoped to be. It never quite reached William Carson’s artisanal, renovation style, nor was it quite in the healing idea of Kintsugi, but maybe it became what it was supposed to be: an artistic platform for the people, during a time where artistic platforms were nearly nonexistent. A platform depicting a cosmic prism of Detroit through degeneration, communal creativity, and new beginnings.