The Power of Grassroots Activism Against a Russian Invasion

How Ukrainians and Russians Abroad, and in Detroit, React to Russia’s Attack 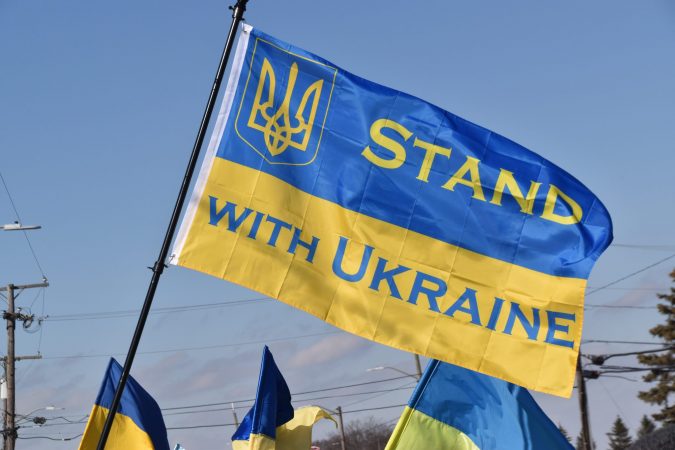 Months of Russian political action and military mobilization, followed by days of elaborate training exercises in Belarus across the world. Still, in the third week of February, and entering the fourth week of the war, the future for Ukraine is clouded by speculation and uncertainty.

On February 16, the Atlantic Council published an opinion piece titled ”Why Putin Won’t Invade Ukraine” while, at the same time, the Biden Administration called for U.S. citizens to leave the country immediately. On February 11, one U.S. intelligence official warned that Russia had positioned 80% of the forces necessary for a full invasion. Just two days earlier, Al Jazeera published a piece by Ukrainian Researcher Harun Yilmaz called “No, Russia will not invade Ukraine”.

Then, at 6:00 a.m. Moscow time on February 24th, Putin addressed the world with a thin justification for the war which was promptly punctuated by the first explosions around four Ukrainian cities. So many political predictions from reputable sources aged faster than milk and the lives of millions changed forever.

In the weeks following the start of the war, Ukrainians, Russians, and others in geographic or cultural proximity to the invasion began the journey of finding their place in a new reality defined by an unprovoked war. The United Nations High Commissioner for Refugees estimated that over 3 million refugees have fled Ukraine as of  March 15.

Prior to the invasion, Ukraine had one of Europe’s largest militaries with 170,000 active troops and after the Russian invasion thousands of Ukrainian citizens lined up to join Local Defense Units. Broadcasters interviewed untrained, everyday people as they were issued rifles and prepared Molotov cocktails and medical kits for the battles to come.

Russian civilians have trials of their own. Many oppose the Government’s unjust invasion, but oppressive laws prohibiting free speech cast a chilling effect upon anyone who may voice protest.

The tragedy’s impact ripples far beyond the borders of Ukraine and Russia. Some in Metro Detroit have completely restructured their lives around the invasion. Jenny Feterovich is a film producer and the incoming president of the Detroit Chapter of the Organization of Entrepreneurs. 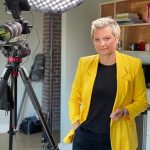 JENNY FETEROVICH IS A FILM AND TV PRODUCER FROM RUSSIA AND BASED IN METRO DETROIT.

Feterovich lives in Metro Detroit and since the invasion, she has largely abandoned her regular work to help people in Ukraine. “What’s happening in Ukraine is highly personal for me and my family.” She says, “I have friends, family, employees, and business colleagues from there. As a humanitarian, this is very hard to watch and absorb. It has effects on every part of my life.”

Feterovich immigrated to the U.S. from Moscow in 1989. She says she left with 100 dollars and six suitcases and that the Russian Government today very much resembles that from which she escaped.

When the invasion first began, the Polish Chapter of the Entrepreneur’s Organization quickly launched an initiative on the ground. Through this connection, Feterovich was able to begin connecting Ukrainians to fundraising and people with the ability to deliver supplies.

She says that once she started, the work swelled very quickly. “People started coming to me and saying things like, ‘Hey I’m baking this bread, maybe somebody wants to help with that.’ I realized I’m gonna have to do something for more than just one cause.”

On March 12 she and a few friends launched a non-profit called Luv Without Borders. The organization seeks to help Ukrainians through different means such as the provision of medical supplies, support for orphanages, and support for arriving refugees on multiple borders. “I would love to see human beings being human beings and not dividing along nationalities and religions.”

Feterovich says there was a great need for this type of work. “Unfortunately last time I talked to the people on the ground, there were only three hundred Red Cross, and whether it was supplies or money, it wasn’t getting there quick enough. It still isn’t. (…) Somebody needs to be helping these people as soon as possible.”

Federovich isn’t alone in this sort of grassroots effort. Sam Rozenberg immigrated to the U.S. from 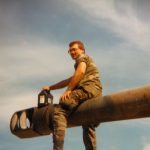 ROZENBERG POSING ON THE BARREL OF A HOWITZER DURING HIS TIME IN THE US ARMED FORCES.

the former Soviet Union, now Ukraine in 1978. He did not look kindly upon his time growing up there. “I really disliked the place. I disliked the anti-semitism. I was picked at, I was humiliated, I got in fights because I was Jewish. I had that bad taste in my mouth.”

But in 2006 Rozenberg and his family decided to give it another chance. That trip changed his disposition completely and he now harbors an affinity and love for Ukraine which he says makes the war incredibly difficult.

Rozenberg is the founder of Share Detroit, a non-profit focused on connecting people interested in volunteering or donating to charitable organizations. He leveraged the infrastructure of Share Detroit to create Share Ukraine. Through the site one can access opportunities to volunteer, donate, and attend events such as rallies and educational lectures.

Rozenberg says that before this, he has never been much of an activist but the emotional impact of the invasion was enough to change that. “I don’t sleep much. I’ve never slept much and now I barely sleep. It’s weighing on me but I don’t have a choice,” he says, ”I will not go through life feeling sorry after the fact. Unless I try everything I can.”

Some of these organizations are working in close cooperation with one another. Rozenberg is on the fundraising team for The Ukrainian American Crisis Response Commission of Michigan which focuses on providing humanitarian aid, media, and government advocacy, refugee aid, and fundraising.

Much in the way of Share Ukraine and Luv Without Borders, the organization was born out of necessity in the wake of the invasion. UACRCM Chair and lecturer at a Ukrainian university Mykola Murskyj,  says “It’s not a formal group at all, it’s more of an ad hoc coordinating council.”

Although UACRM doesn’t necessarily solicit it, Murskyj says many have reached out to the Committee looking to volunteer abroad. “One of the members of our community is working in Romania to get refugees settled. We’ve had lots of people, usually American veterans, who want to go fight.”

As Americans, we empathize with the situations many Ukrainians and Russians are in. However, it may be difficult to be armed with a full understanding of the political gravity and nuance of their experiences and to use that understanding to act deliberately. Following the lead of grassroots activists who dropped everything to turn shock and fear into a meaningful initiative to help others is one way to navigate this uncertainty.

We may also learn to look to their model when considering how to act on similar humanitarian crisis’ such as those in Yemen, Palestine, and Afghanistan.