Who Are Our Storytellers Today? Tunde Olaniran’s Star is Rising 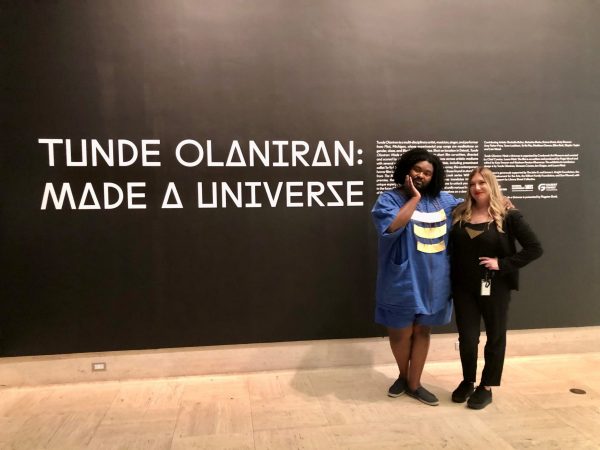 Running parallel to Detroit’s Month of Design is a first-of-its-kind exhibit for the Cranbrook Art Museum in that it involves a commissioned film and a unique collaboration across multiple artistic mediums with several multidisciplinary, award-winning artists.

It is Made a Universe by artist, musician, performer, and now filmmaker, Tunde Olaniran (who uses the pronouns they/them), who is making a name for themself as a rising star.

“Made a Universe is an encounter that’s quite visceral for viewers,” said Laura Mott, Chief Curator of Cranbrook Art Museum. Instead of traditional artwork, we adapted an immersive exhibition format around the film, which is really a different way of thinking about the viewers’ entire experience.” 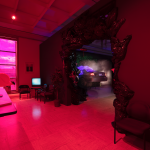 Olaniran met Mott a few years back when both were involved in a Nick Cave Exhibition at the Cranbrook Art Museum. Mott was impressed by Olaniran’s talents and continued to think about what they might be able to do together. In 2019 she reached out. Olaniran began telling Mott about wanting to try a project with more visual elements and connect the dots across mediums in a fully immersive way.

Mott then helped Olaniran raise over $250,000 – a large portion of which came from the Knight Foundation – and the project was born.

“Laura took to it and understood what it would entail. She was wildly and radically encouraging and really pushed the envelope on creating something Cranbrook had never seen the likes of,” said Olaniran.

Shot on location in Detroit, the 26-minute film is co-written, directed and scored by Olaniran. They worked with Detroit-based artists to create the film’s scenography, costuming, and props.

In the galleries, the sets have been reimagined as an immersive art installation that takes its visual inspiration from the film through light, color, and sound to complement the emotional and cinematic quest of the story.

These elements are re-imagined in the galleries along with a screening room, offering visitors an immersive, parallel journey through Olaniran’s creative universe.

We didn’t want people to feel like they were in a gallery or the same space as the gallery. We wanted it to feel fully immersive, said Olaniran.

“My other goal was to create the exhibition in such a way that everywhere you look you a portal into something else can be seen. Every opening and reflection represents a different universe. And when viewers come out after seeing the film, everything they see has a different meaning.” 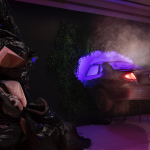 The film deals with anxieties and trauma that come from systemic problems many black and working class Americans face. Case in point is the Flint water crisis and how it played out for people within low-income sectors.

Olaniran shares, “There are emotions and anxieties that come with being poor in a city like Flint. People are juggling bills and negotiating to have necessities. And then they receive a shut-off notice and bill collection for water that’s not even usable. I tried to take these anxiety-inducing things and turn them into horror or suspense and play up how surreal some things are.”

One of the film’s lead characters is based on a real person who lived in Olaniran’s neighborhood and who died. “This person died a senseless death and I wanted to think about him and write him as a character and imagine if that didn’t have to happen. What if the person I knew did not have to die the way they did?”

Olaniran also collaborated with other artists to bring their stories into the project. “I opened the process to multiple voices in the storytelling and that made it so much richer.”

About the project and the local artists, Olaniran goes on to say,

There are so many talented people here but basic things like space are challenging. Property is expensive and a lot of artists don’t get a chance to develop artistic practices in a way that they could. This is robbing the city of great work and I think we are culturally poorer for it. 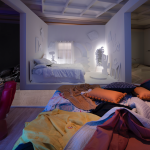 They go on to say, “Galleries are still figuring out how to work with diverse and intensely creative people as well. I think Cranbrook is a wonderful example for other museums. Laura and the team invited me in and took care of me and let me experiment without restrictions. I hope other institutions take that risk and give that chance to new artists.”

Mott sees sharing Tunde’s message as pertinent and important, saying “Who are our storytellers today? Tunde has such an incredible way of making people think and move and dance around self-love and self-empowerment, and further, getting to that place through adversity. It’s a powerful message that needs to be shared.”

Find out more about the exhibit here.