The Race to Finding Green Energy is On, and Detroit Based Craftsman and Inventor Carlos Nielbock Thinks His Detroit Windmills are an Answer 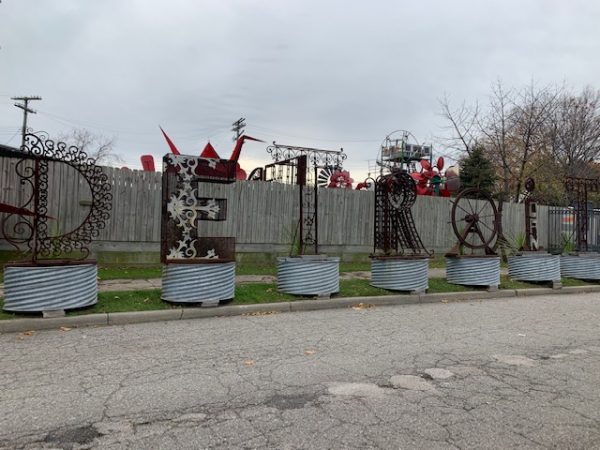 On the east side of Detroit behind a fairly nondescript brick building, colorful and unexpected shapes, contours, and moving parts rise out of the yard above the fence line.

Here, a mission is taking place with the vision of creating jobs toward the production of green energy using all upcycled materials that also serve as community artwork.

What kind of backyard project could possibly assume such weighty initiatives? 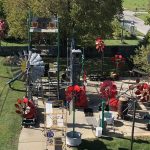 NIELBOCK’S SKY GARDEN, WHICH IS USED FOR A TESTING

“There is wind all around us all the time. There are materials overloading our dumpsters and landfills. We need to put them to work for us,” says Nielbock. That’s the impetus in its most simple form, and you really can’t argue it.

Born in Celle, Germany, he learned metal crafting art at age 15, took to it immediately, and was inspired by an early appreciation for the fine detail and ornamentation that typifies European architecture.

Nielbock moved to Detroit in 1984 and started CAN Art Handworks on the city’s east side where he has made a career of restoring architectural and historic metalwork, including sculptures, monuments, and plaques, a skill that’s becoming scarce. Projects have included work on the Spirit of Detroit, the Fox Theatre, the Gateway to Freedom International Memorial to the Underground Railroad, and other important landmarks of Detroit. 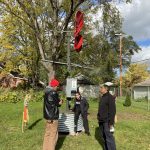 For more than a decade, the artist and entrepreneur has been researching and developing low-altitude urban wind turbines — fashioned out of upcycled materials like truck axles, satellite dishes, light poles and more. Having received a patent for these Detroit Windmills, and instant engagement from the communities where they’ve been employed, the next step is to scale up.

“I believe we have to work with what we have to create a sustainable city. We absolutely have the talent, human resources, and materials all around us here in Detroit. Producing things and realizing our worth, tapping into world-class innovations all around the city’s landscape and its manufacturing roots, creating employment opportunities, and parlaying all of that into a sustainable city for future generations is exactly what we can be doing and should be doing – in a big, big way” Nielbock says.

STORY OF THE WINDMILLS

Nielbock’s design brings the windmills low to the ground so the visual impact like those towering mass-produced three-blade structures is eliminated.  The device harnesses both solar and wind power and can operate at wind speeds less than half a mile per hour, while the large triple-blade windmills need 12 mph winds to move. Further, the manufacturing process behind the mass-produced windmills creates carbon emissions, and the non-recyclable fiberglass blades end up in landfills. 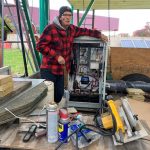 Conversely, Detroit Windmills are made 100% from upcycled materials – materials that are readily available, and would otherwise be melted down via fossil fuel to make other parts (i.e. carbon emissions) OR end up in a landfill. This approach is clearly a huge pro for our environment.

The low altitude turbines operate on a microgrid, which was created using upcycled materials from DTE’s recent light pole restoration. “This program left a surplus of materials and components that I fashioned into a microgrid that holds and directs current power to charge a battery backup or power special circuits such as LED lighting,” says Nielbock. In another example, an urban farm can use a Detroit Windmill to power water pumps so crops stay watered and healthy.  The windmills can also charge phones and laptops and power lights, speakers, small appliances, and more.

For communities, it can mean they can be more energy-independent.

In recent years, several organizations and entities have started to take note of what Nielbock’s been onto, and a few years back, he received a Knight Arts Challenge grant in partnership with the nonprofit Eastern Market Corporation to create two wind turbines: a cellphone charging station near Shed 5 and another to help irrigate crops at the Market Farm near the Dequindre Cut.

Meanwhile, sociologist and UofM Dearborn professor Paul Draus and his research partner happened upon Nielbock’s windmills while walking around the neighborhood in 2009.

What we found that day is remarkable. This conversion of green energy (sustainability), materials (circular economy) and skills (human capital) is, to me, a triple bottom line distilled into one device, says Draus.

The Eastern Market activations were readily received and embraced, generating not only renewable energy but human energy interest and connectivity of those present and involved.

“To bring the windmills into the community and demonstrate how they fit into the economy of neighborhoods as a source of energy, a source of jobs, and be a “landmark’ gathering place was a big success,” said Draus.

Through grants, Draus also brought students into Nielbock’s Sky Garden – a testing field – to document processes and create data necessary for the patent and to go forward with larger entities.

Since then, they’ve installed temporary windmills at Beacon and activated an Alley-lighting project in Detroit.

LOOKING TO THE FUTURE

The Green Energy Village remains the goal, with Nielbock desiring at least 100 windmills around his community and the city in the next year.

“In order to scale and bring the project to its potential, funding and collaboration is needed badly,” says both Draus and Neilbock.

“I feel we are in the process of creating the future and paving the ground for the next generation,’ says Nielbock. “I’m ready to put the pedal to the medal and put Detroit on the map as the leader in the creation of green energy of the future. But I’m just a metal guy. I need help fueling the project to scale it up.”