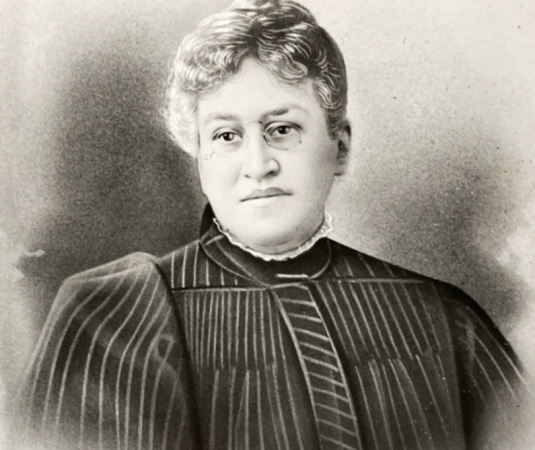 154 years ago on the heels of the Civil War with racial tensions at an all-time high, 28-year-old Fannie Mae Richards became the first black female teacher for Detroit’s public school system – ‘Colored School No. 2.’

For the next 47 years she would work toward – and win – the fight against segregated schools in Detroit, establish the first Kindergarten class in Michigan, and educate hundreds of Detroit kids.

Born October 1, 1840, in Fredericksburg, Virginia, to Aldoph and Maria (Moore) Richards, she would first have to earn her own education.

Social and legal constraints made schooling for blacks in Fredericksburg nearly nonexistent, so during her early years, her mother, a leading scholar of history during her school years, tutored Fannie and the rest of her 14 children. In 1850, when Fannie was ten years old, her father died. To escape the restrictions and offer her children a proper education, their mother moved the family to Detroit.

There, Fannie attended a small private school run by Second Baptist Church, then went on to continue her education at the Toronto Normal School where she earned her teaching credentials, graduating at the top of her class.

Still seeking further education, Richards traveled to Germany to study with Professor Wilhelm Forbel who was developing the revolutionary concept of kindergarten.

Returning to Detroit in 1863, at the age of 23 she founded a private elementary school for black children and, five years later was appointed the Instructor at the newly opened Colored School Number 2.

During this time, she protested vigorously against Detroit’s segregated school system. Working with her brothers and local politician John Bagley, Fannie and her supporters worked to help bring the case, Workman v. Detroit Board of Education to the courts. It began after a Black man, Joseph Workman, tried to enroll his son in the school near their home, a school which Workman’s taxes helped pay for.

In 1871, the Michigan Supreme court ruled in favor of desegregation in this case, ordering Detroit’s school board to abolish separate schools for black and white students. This was nearly 90 years before the United States’ landmark Brown v. Board of Education.

Shortly after, Fannie began working at the newly integrated Everett Elementary School, where she established Michigan’s first kindergarten class. She would go on to teach there for the rest of her career.

In 1915, after more than 50 years of service, Richards returned from teaching and died just 7 years later.

She will always be remembered for fighting to equalize the education for underserved students in Detroit.