Architect Icon, Yamasasaki Deserves Applause for Some of His Many Modern Designs in Detroit 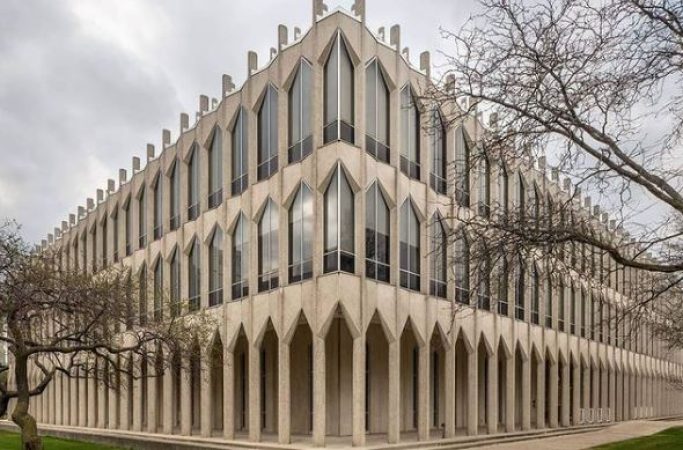 Minoru Yamasaki has numerous signature designs in Detroit. This list is spotlighting some of the most important buildings that gave Yamasaki a special name in Detroit. He created with his surroundings in mind. He also pulled inspiration from various cultures and certain influential times, which reflects the community mentality present in the city today.

What’s also cool about the structures is you can see his unique approach and openness when it comes to looking at his work in a new light as time progressed. Detroitisit rounded up a list of 5 intriguing buildings in Detroit that were created by Yamasaki. His designs help us get a sense of Yamasaki’s own lens of Detroit and the world.

Minoru Yamasaki was an American architect who left a legacy in the Detroit area for over forty years. The world-renown architect was in his prime in the early 1960s. Some of his most notable modern projects, include, serving on President Kennedy’s commitment to redesigning Pennsylvania Avenue in Washington, D.C., and being selected to construct the World Trade Center in New York, formerly the tallest building in the world. 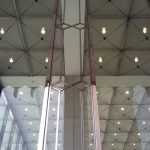 Starting off this list of Yamasaki’s architectural designs is Yamasaki’s first skyscraper. This was also the only one he designed prior to the World Trade Center. The 26-story structure consists of precast concrete panels applied to the exterior, eclipsing the internal steel frame. The building’s narrow windows are a motif Yamasaki used in several later buildings. Vertical lines are cast from the lobby up to the top of the building, emphasizing the powerful height, along with marble-faced columns.  The public lobby is another important part of One Woodward Avenue’s magnificence. The spaciousness is created by the luminous structural travertine columns, elevating the ceiling to 30 feet, and using reflective aluminum mullions and extremely tall window panels. Click HERE to learn more. 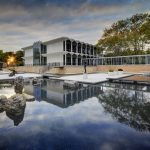 Yamasaki’s masterpiece, the McGregor Conference Center, demonstrates his transition to a different kind of modernism in the mid-50s. Yamasaki traveled to Italy, India, and Japan during a time in the 1950s when nearly-fatal ulcers were urging him to take a break. His journey and contact with historical monuments like the Taj Majal, as well as traditional Japanese vernacular architecture ended up being the inspiration for more innovative designs, such as “serenity and delight”. The sensory experience is evident. Check out the exterior that lets in light in a unique way. You don’t have to have an eye for professional architecture to know there was out-of-the-box thinking involved in the pointed arches coexisting with water features, among other incredible qualities. Click HERE to learn more. 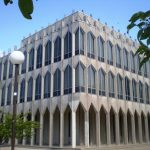 If Yamasaki didn’t know he was on the right track, he did after Wayne State University likened to his McGregor Center work so much that they got him to draw up a campus plan and design other buildings. Brilliant ideas became literal concrete. The Education Building’s construction utilizes 120 precast concrete “trees” for a beautiful, circular perimeter with repetitive, thin supports. You’ll notice the trees are bracketed to the building’s structural system to form an exterior wall over the building’s actual concrete structure. Witness the multiple arches and the ground-level arcade for a visible evolution. 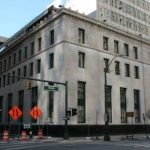 Yamasaki’s status went from architect to chief designer when he moved to Detroit in 1945 to join Smith, Hinchman & Grylls. The great Federal Reserve Bank of Chicago was an incredible opportunity for Yamasaki where he sought to remodel its downtown Detroit branch. The end product consisted of an 8-story Annex with a thin curtain wall of alternating bands of white marble panels and tinted green glass conjoining the existing Neoclassical bank. You wouldn’t think a Bank would typically be lit up naturally and have much greenery around, but it is with Yamasaki’s touch. He set the structure back 30 feet from the street where office workers could enjoy the sunlight and urban oasis view. This building was the first modernist skyscraper in downtown Detroit. Click HERE to learn more. 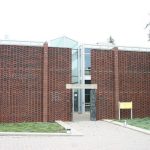 Notice the conceptual differences that reflected Yamasaki’s new outlook. This building exemplifies the transition from minimalist work to more rich-quality creations. Part of the reason for these new physical characteristics was the exploration of different materials and a deeper structural awareness of environmental connection. Not to mention, this was one of his first attempts at incorporating a Japanese-inspired landscape in a small-scale design. You’ll notice the trees, grass, and (originally) reflecting pools placed between the building with a screen wall. You can peer into the courtyard and see the building through the brick wall with small slits in an interlocking pattern.