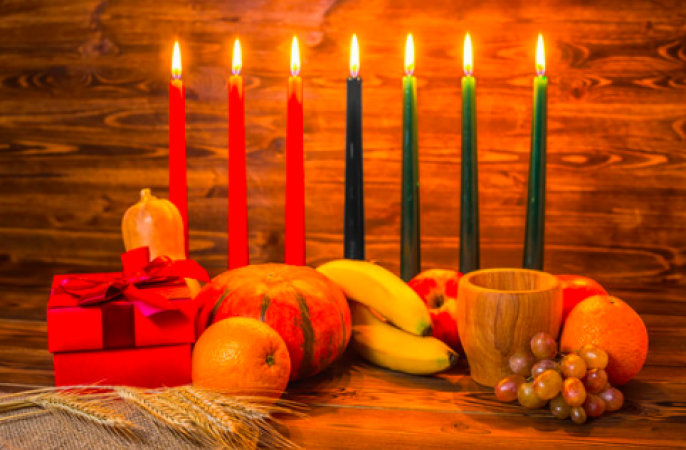 Saturday kicked off the start of Kwanzaa, which is a seven-day non-religious holiday observed in the U.S., meant to honor African Americans’ ancestral roots that are celebrated widely throughout Detroit’s African American community. The celebrations each day include food, decorations, and a kinara, which holds seven candles.

Maulana Karenga, a black nationalist, and professor of Pan-African studies at California State University at Long Beach, created Kwanzaa in 1966 and it became wildly popular Kwanzaa in the 1980s and 1990s in tandem with the black power movement – making up the trio of winter holidays along with Hanukkah and Christmas. The name Kwanzaa comes from the Swahilli phrase “matunda ya kwanzaa” which means first fruits and is a recognition of Black history.

The celebration of Kwanzaa, which spans from December 26 to January 1 each year, includes an acknowledgment and honoring of its seven principles, known as Nguzu Saba. Each day of the festival is dedicated to a specific principle, marked by lighting a new candle on the kinara, a seven-branched candelabra.

As Detroit stands behind the Black Lives Matter movement more than ever in 2020, we are sharing the seven principles, their true meaning, and the celebrations of Kwanzaa, because even if you don’t personally celebrate, these principles hold true to many within the community.

The first night the black candle in the center is lit and the principle of Umoja (Unity) is discussed. Umoja means unity in Swahili. This means to strive for and maintain the unity of the family, community, nation, and race of people.

On the second night, Kujichagulia is discussed and the XX candle is lit. This principle refers to defining, naming, creating, and speaking for oneself.

Next, Ujima, which is translated as “collective work and responsibility,” refers to building and maintaining community and solving problems together.

Meaning cooperative economics. Very similar to the previous principle Ujima, this principle refers to uplifting your community economically through building and maintaining retail stores and other businesses and to profit from these ventures.

Nia means purpose. Karenga defines Nia as a principle “To make our collective vocation the building and developing of our community in order to restore our people to their traditional greatness.”

The seventh principle translates to “faith” and is defined as faith in community by believing that “all of our heart in our people, our parents, our teachers, out leaders and the righteousness and victory of our struggle.

According to Click on Detroit, the Charles H. Wright Museum in Detroit will present the seven principles of Kwanzaa by streaming songs, dances, stories, poetry, and more every night at 7 p.m. through January 1. Head to the museum’s website to check in out and join in on the celebrations.

Traditional Kwanzaa ceremonies typically include an assortment of musical selections to honor African ancestry, a reading of the African Pledge and the Principles of Blackness, which is then followed by lighting of the candles, performances, and feasts known as Karamu.

The three green candles, representing Nia, Ujima, and Imani, are placed to the right of the Umoja candle (black), while the three red candles, representing Kujichagulia, Ujamaa, and Kuumba, are placed to the left of it.  On the first day, the Umoja candle is lit in the center. Then, the correct order for lighting the remaining candles is to start on the far left and light the red candle, starting with Kujichagulia and then lighting candles from left to right each day after that.