Detroit’s Bike Scene Has Been Documented the World Over. The Subculture’s Complexity Has More to Offer Than Hot-Rod Style

Bike lanes cut against the sidewalks, connecting the farthest reaches of the city to its towering downtown. This is a city with a culture of people proud of their bikes. Hot Rod Glamour begs the question of who’s in charge of the roads these days. Go for a ride and see what cycling does for a city like Detroit. Sprawling roadways with intersecting neighborhoods throughout the highways have made safety of little concern.

Biking is at the intersection of Detroit’s past and future. A city long-ruled by favoritism to cars moved into the middle of the 20th century with strife and civil unrest. The aftereffect of which removed purchasing power, business ownership, and even the ability to buy cars for what’s been hovering around 1 in 4 Detroiters.

Since a quarter of people living in Detroit can’t afford to own a car or just don’t want to, something different has come from the city’s self-reliant mentality. A long timeline of disinvestment in the city brought the need to make getting to work easy. “To make it a cool thing,” said ’40’ Hardaway, leader of one of Detroit’s many, now thriving, bike clubs.

Detroit’s bike scene has been covered around the world. Bikes have been photographed for British Newspapers, flown into Berlin art galleries, and brought to nationwide bike gatherings in Las Vegas, Nevada – one in particular called “One Big Club.” It’s captivated people beyond the City of Detroit with lights, streetwise style and strong community elements that are all proof the bike scene is here to stay in the revitalization of Detroit. 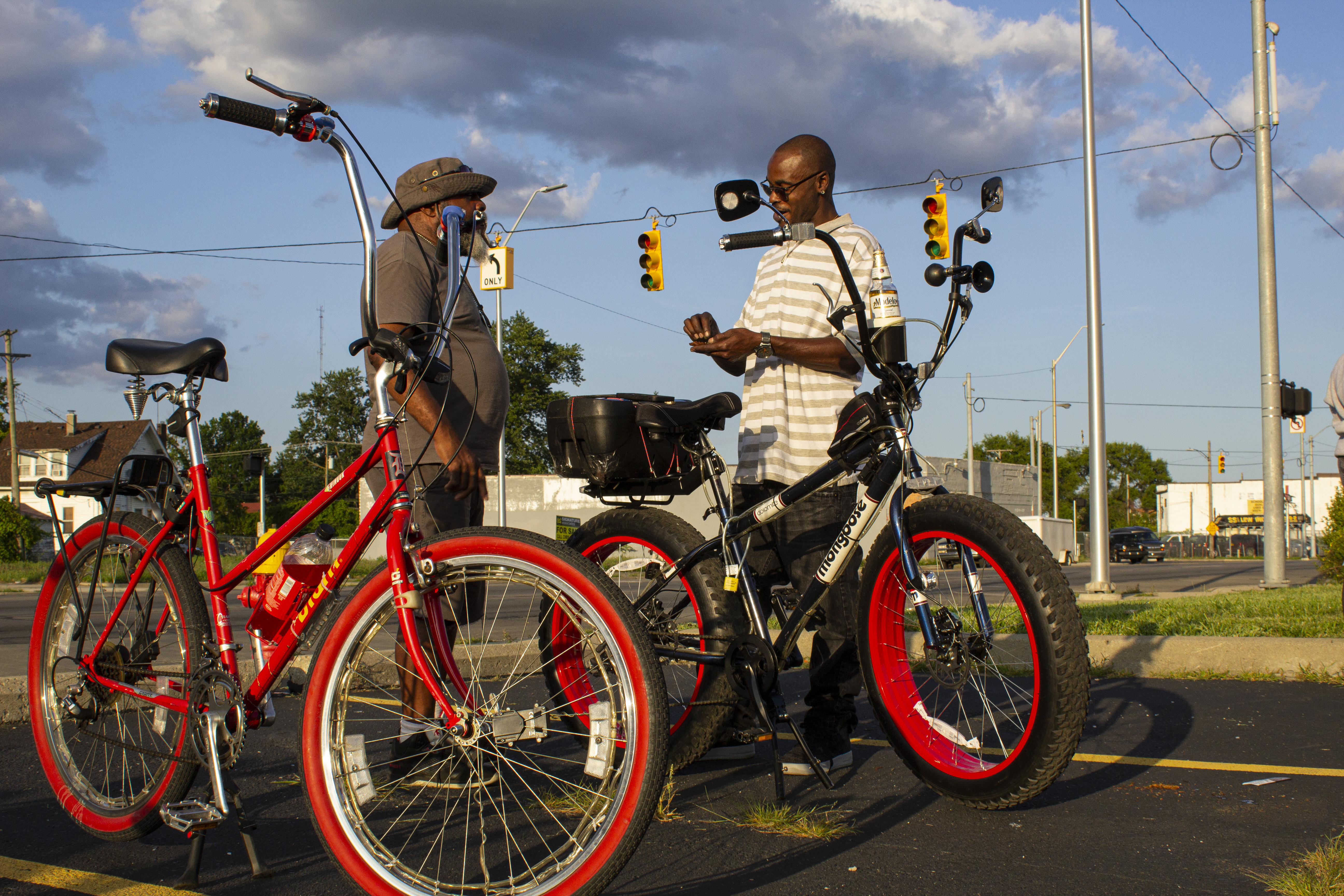 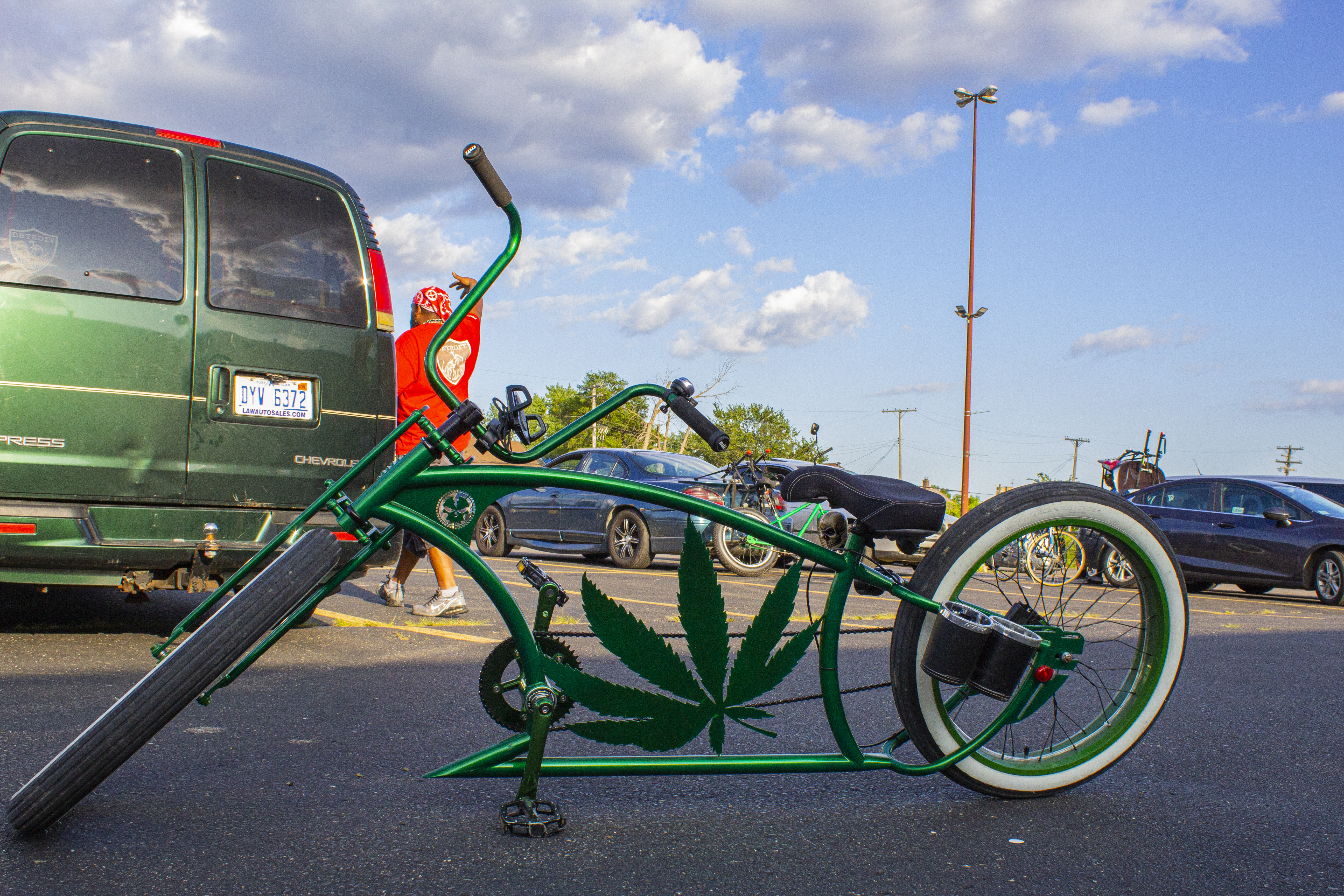 A GREEN CUSTOM MADE BIKE IS PARKED BEFORE A WEDNESDAY NIGHT RIDE. PHOTO JOHN BOZICK 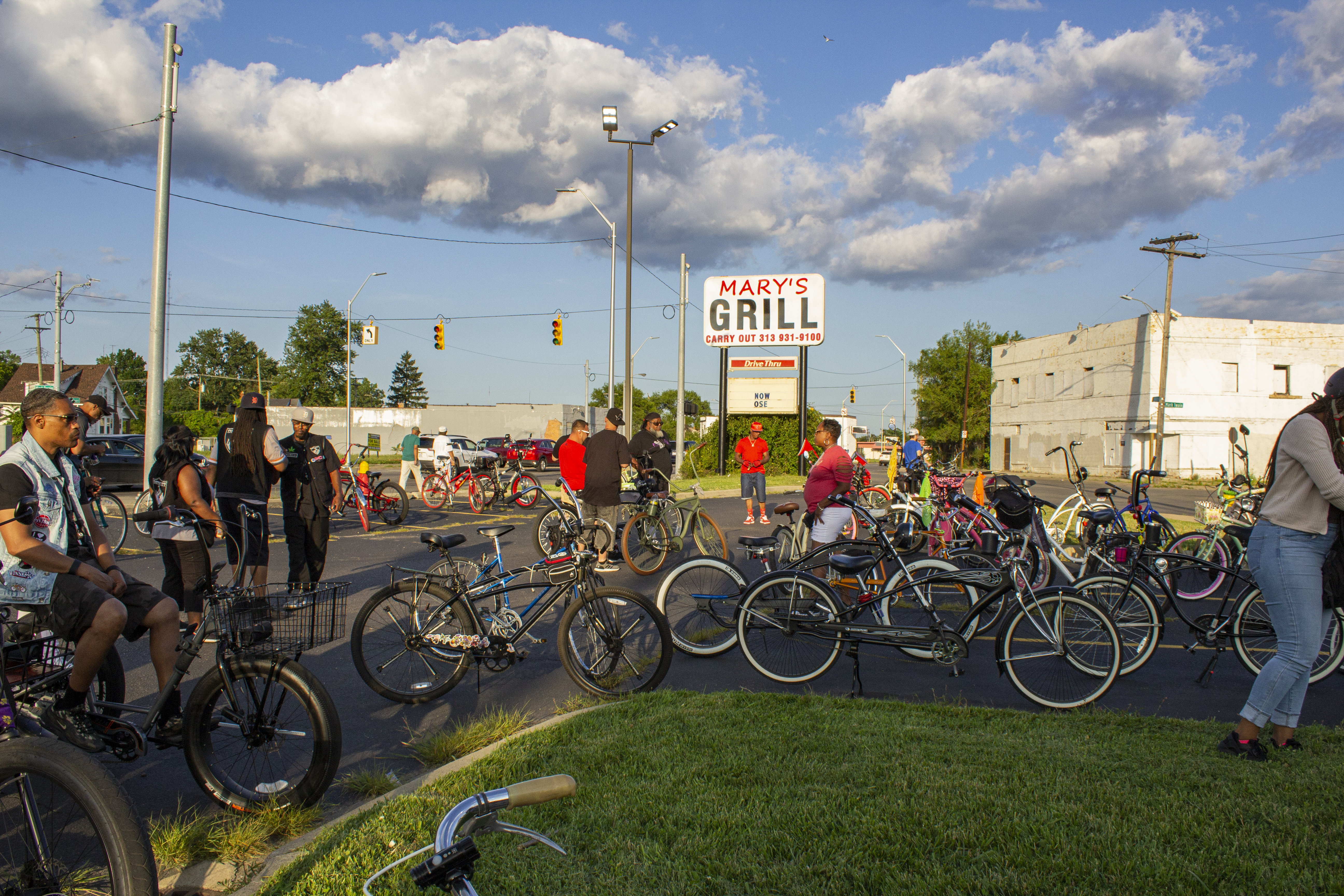 “We had people who knew how to do things with their hands,” Todd Scott, the Executive Director of the Detroit Greenways Coalition, said. “They knew how to make stuff, so we have a maker, DIY culture that’s artful.”

Scott’s organization has been working since 2007 to make Detroit into a city where people can walk and bike easily. By all accounts, the Coalition has made lasting change. Last year, the city introduced protected bike lanes to East Jefferson Avenue, at the behest of the Coalition.

Since his work with the Greenways Coalition, he’s become a sort of historian for all things biking in the city. He also runs a blog detailing all there is to know about the history of Detroit on two wheels.

Scott’s belief is that a combination of events made Detroit what it is today. Starting with disinvestment, nearly half the city’s streetlights weren’t working in 2013. “So this made people get clever and start putting lights on their bikes to be seen,” Scott said.

Detroit’s topography is flat, so the performance of a bike takes a back seat to the style. And style rules.

Supposedly the artful style of customizing bikes was started by a man named KingWayne. After him, bikes took every form and function – including a bike with a working grill welded to the frame by KingWayne himself.

“We said we weren’t going to let our bikes look like everybody else’s,” KingWayne said. Customization is king. “Like the grill bike, it’s the only one. We’ve got a whole bunch of bikes where that’s the only one.”

THE BIKE CLUBS IN DETROIT 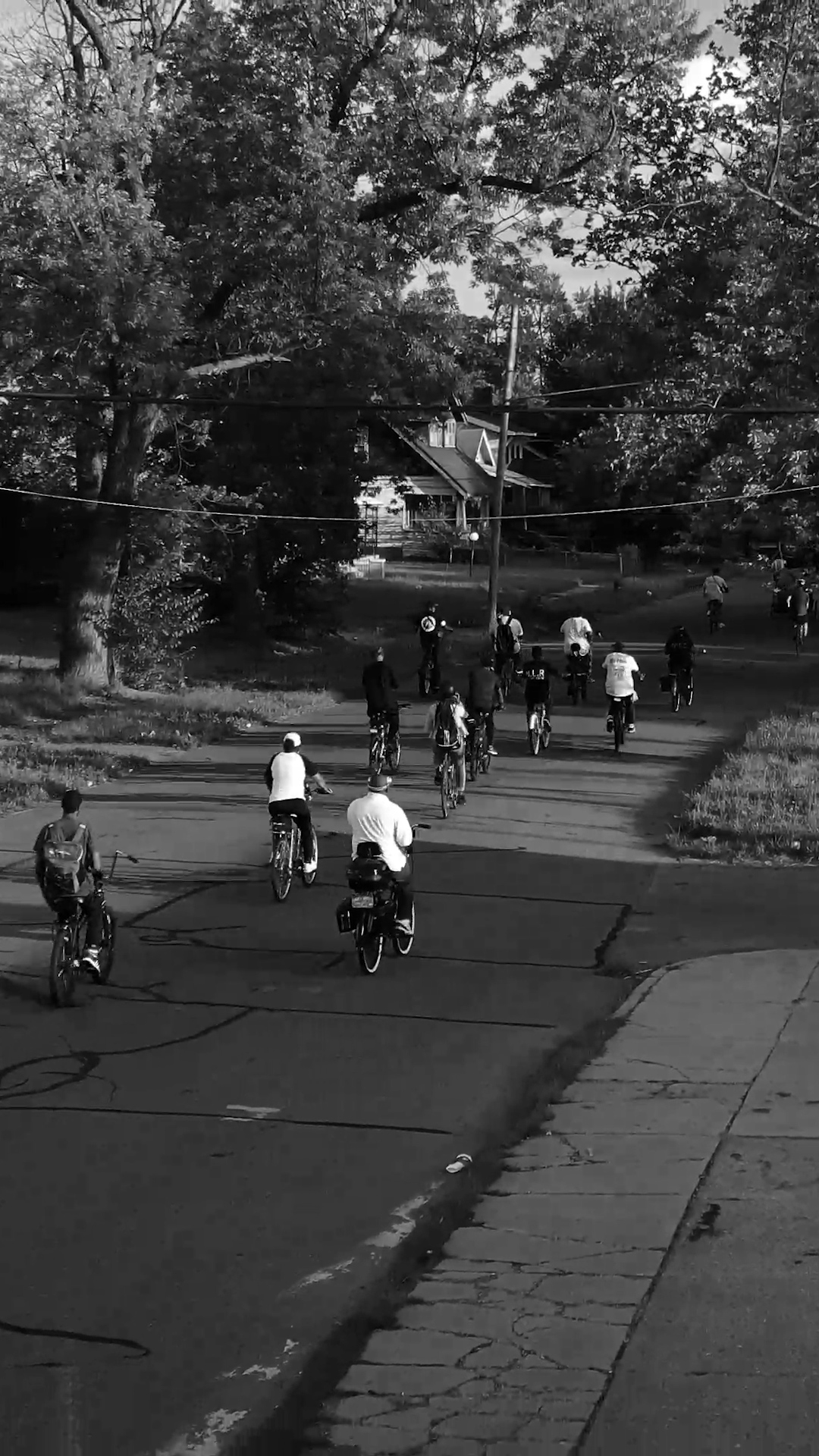 While stories abound about what brought bike clubs to the streets of Detroit, it seems two general ideologies prevail. The first being that biking in massive groups fosters safety. This allowed riders to see more of the city than ever before.

While Detroit was being described as a war zone in the late 2000s, KingWayne was riding huge groups through the entirety of Detroit.

“It happened on my birthday ride,” KingWayne said. “We went to the Heidelberg Project and some people were saying they I haven’t ever seen it. Others were saying they hadn’t been there since they were a kid because they don’t hang on the East Side.”

The second is that as bike clubs rise, the culture that comes with them does as well. People coming together to ride seems to, for many reasons, bring out the best in everyone. And in massive groups like the Slow Roll, and Soul Roll this is something of an anomaly for the sort of gatherings in Detroit

“It’s rare that you can get this many people together and nothing bad happens,” Will ‘Skillz’ Joseph said.

Skillz is a personality in the Detroit bike scene. He leads one of the major initiatives that helped define what everybody calls ‘positivity’ on the bike rides.

Skillz grabbed on to biking after the death of a friend. When people brought their bikes to the funeral, he decided riding might be what he needed. Now his Unity Tha Movement calls attention to the positivity of riding in a city like Detroit.

‘40’ says there are around 100 bike clubs in Detroit. It’s almost like branding, ‘40’ says. The point is to attract more people for better rides throughout the city. ‘40’ leads the LaneBangerz. East Side Riders is KingWayne’s brainchild. 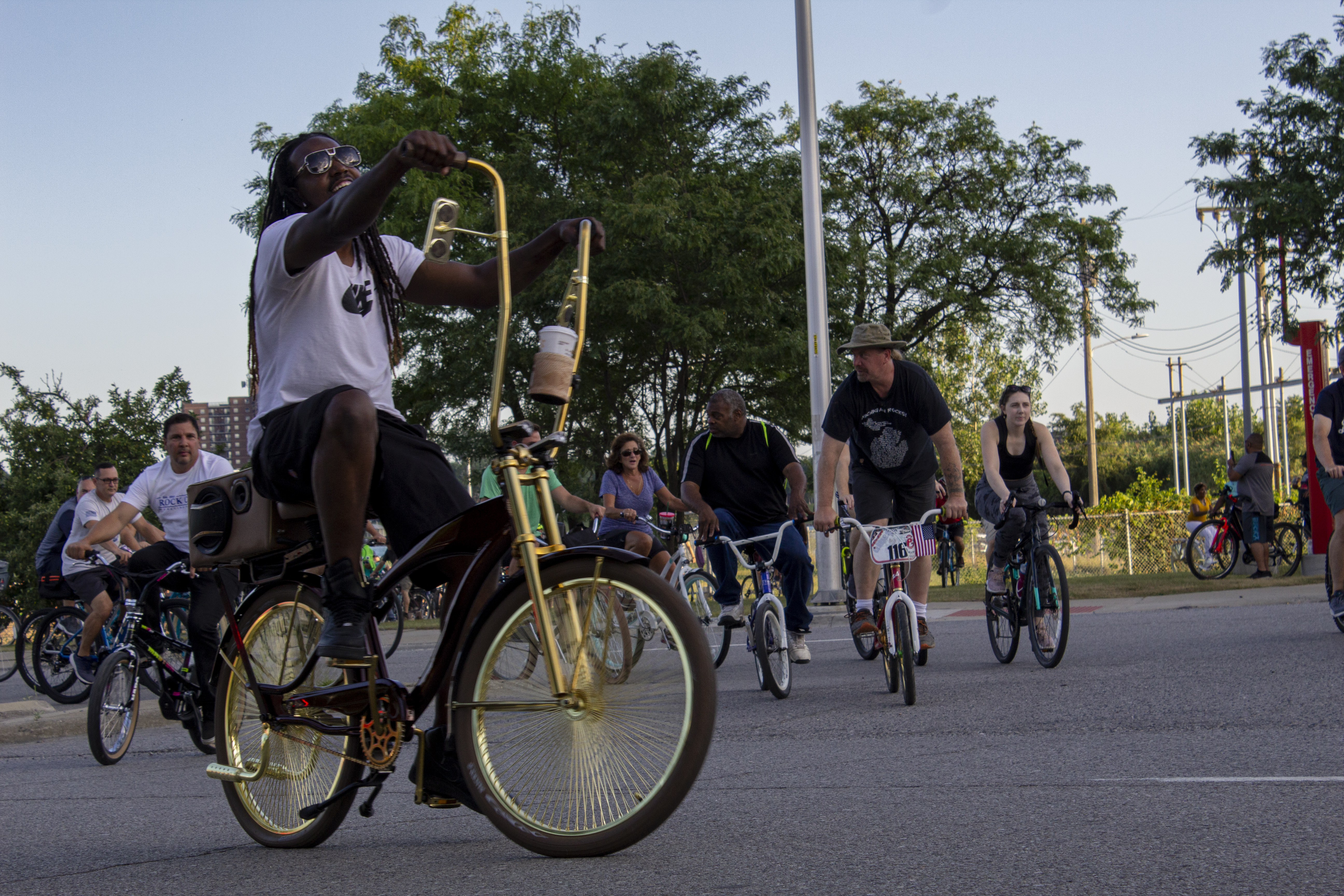 A RIDER ON A CUSTOM GOLD BIKE RIDES OFF AT THE START OF A SLOW ROLL. PHOTO JOHN BOZICK 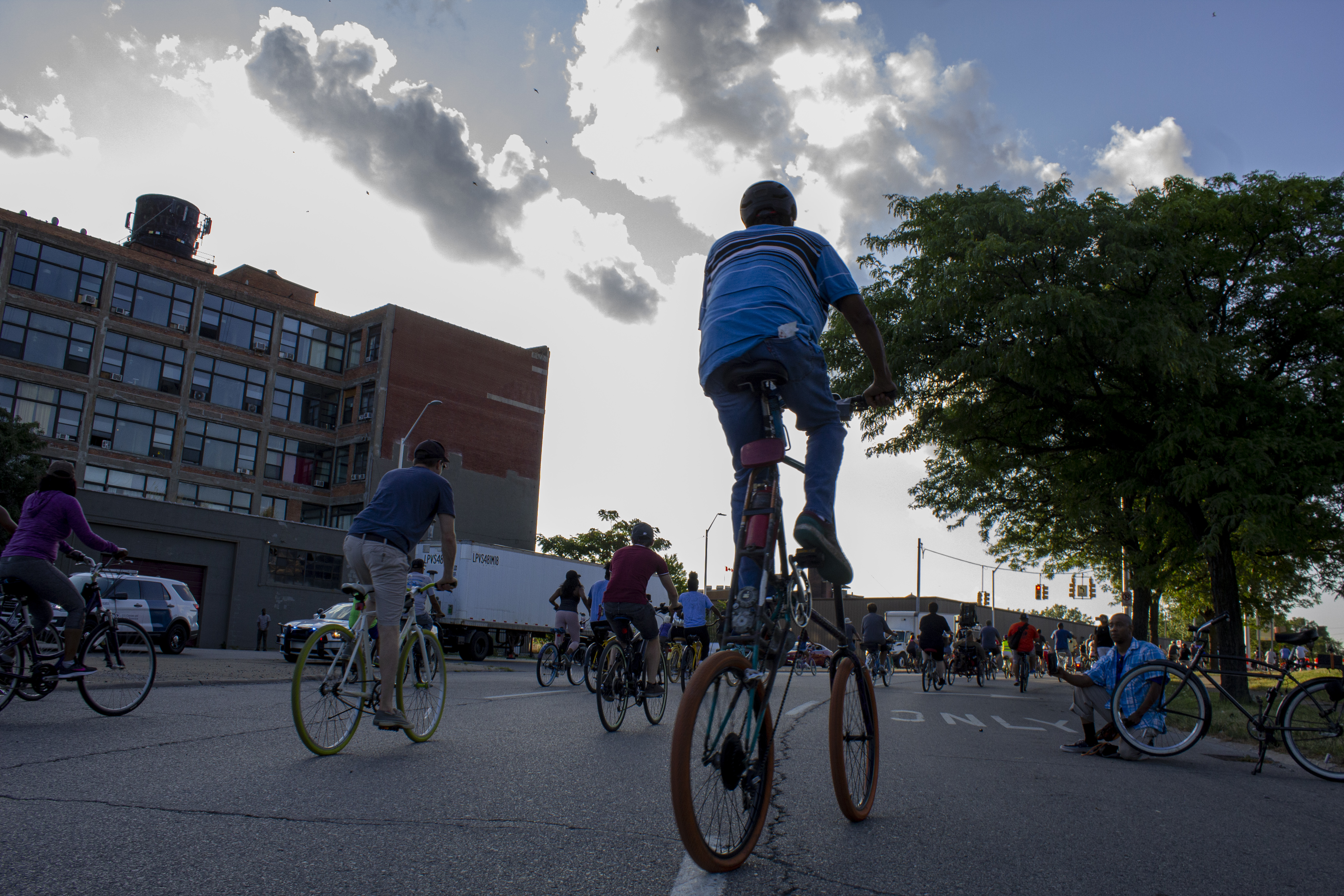 A RIDER ON A TALL CUSTOM MADE BICYCLE DURING THE SLOW ROLL. PHOTO JOHN BOZICK 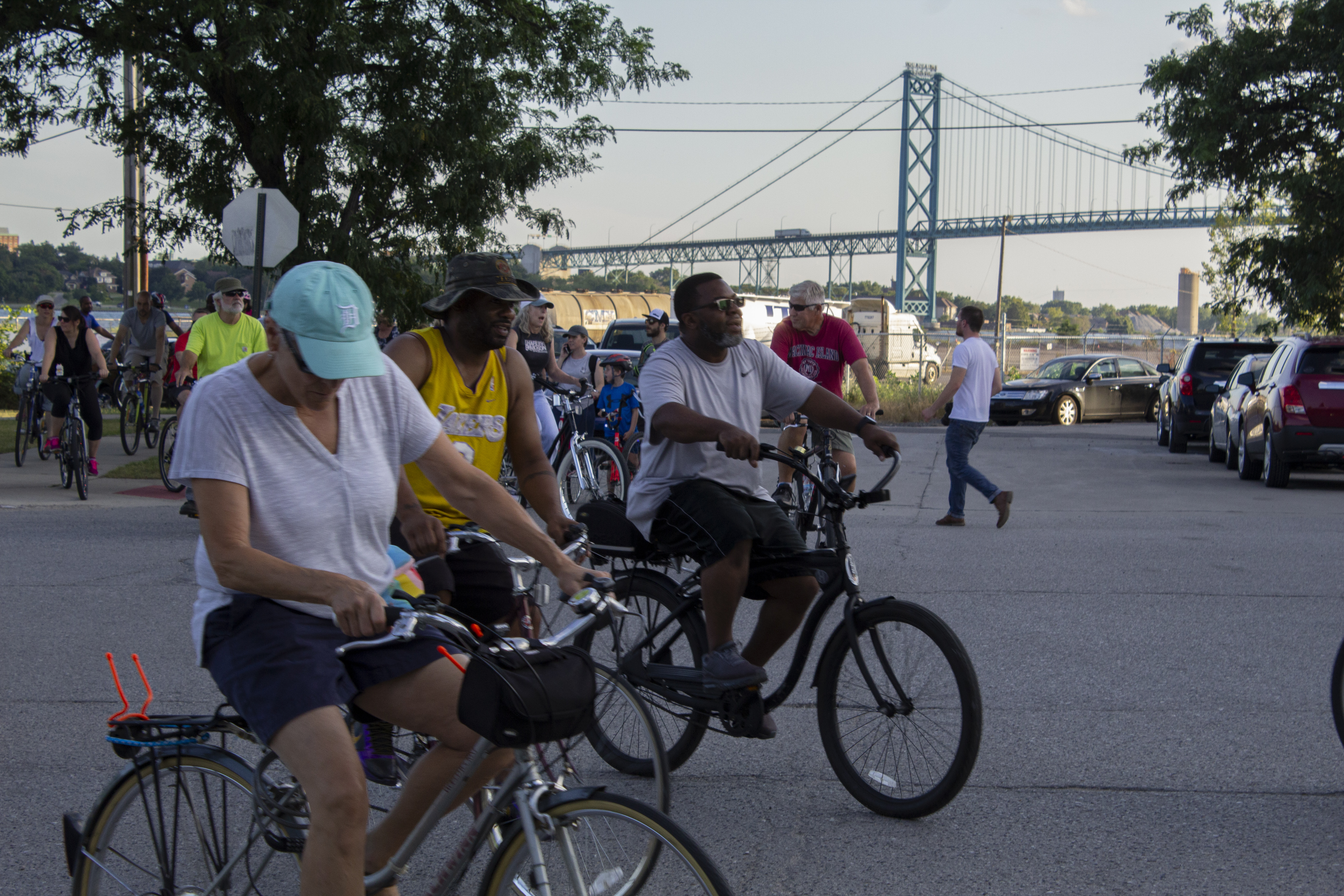 THE SLOW ROLL MAKES ITS WAY PAST THE AMBASSADOR BRIDGE. PHOTO JOHN BOZICK

On a recent ride, KingWayne talked about the money that flows around the Slow Rolls and other bike rides. During rides, bike clubs make pits stops into convenience stores to spend money dollars on drinks and snacks. And after it’s all done, there’s usually a trip to a bar or restaurant.

There’s a serious incentive to being friendly for the bikers. KingWayne thinks it’s the reason for the police protection from traffic during regularly scheduled Monday Slow Rolls.

But Scott thinks there’s more to the economy of biking. “There’s this idea that bicyclists and pedestrians are the indicators of a healthy, safe environment. So when you see people out walking and biking, you just assume that it’s safe.”

When people are outside biking more, they also tend to shop more often at small neighborhood stores, according to Scott. Even Wayne State University has been encouraging students to bike for these reasons. 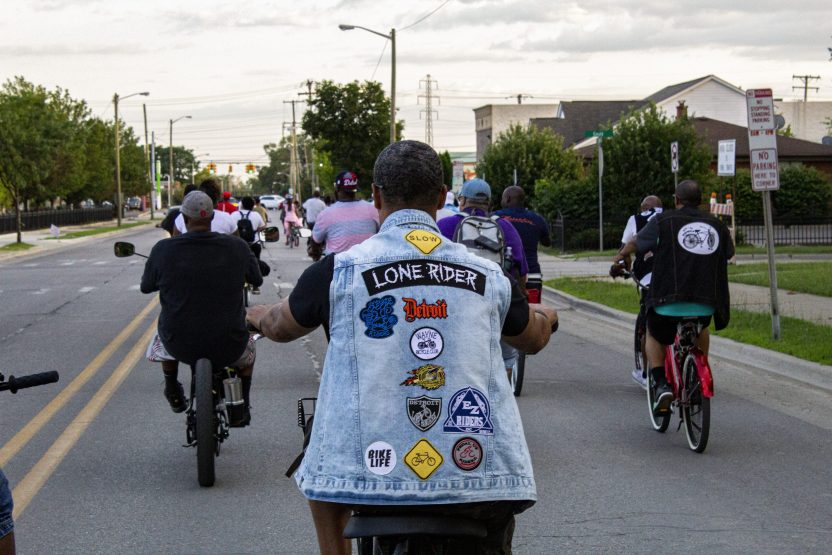 When massive amounts of people depopulated the city and took a bulk of its tax base with it, Detroit lost much of its governmental services. Once called the “Paris of the Midwest,” a thriving metropolis, Detroit is now playing catch-up in a race for the title of the region’s world-class city.

Although a network of factors is taking the city into a newly informed arena of development, biking should receive its due credit. It’s already brought thousands of people into the area for Monday night Slow Rolls and invited a new generation of people to feel safe in the city.

“It’s a great way to introduce a lot of folks to what’s going on in the city of Detroit,” Scott said. “A lot of folks who have a positive attitude and can aim to now become more healthy.”

Even before the Slow Roll started, people were solving the (safety? Community?) problems they saw. When streetlights went out and left some neighborhoods in total darkness, lights became the solution. When people couldn’t spare the money to eat at a restaurant after the bike rides, a bike with a welded grill to it fed everyone on the ride.

“And when everybody was done eating, we’d go downtown and feed the homeless until there was no more food to give,” KingWayne said.

Some of the most extensive community organizing came out of biking. ‘40’ Hardaway gave away 1,000 bikes to kids in 2018 through the program Free Bikes 4 Kidz. His plan is to put another 3,000 under the feet of Detroit kids this year.

At the center of some of the most prominent bike clubs is giving back to the community. KingWayne is quoted saying he built his custom bikes because he wanted kids to look up to something new in their urban environment. He even gives out swag like East Side Riders t-shirts to anyone that volunteers in the club.

Biking has become a way to work toward sustainable improvements to the city. With a network of bike paths and roads being built for cars and bikes, the city seems to be meeting bike culture in the middle.

But this isn’t new. For years, Detroiters have been coming together on their bikes, volunteering for the community, and bringing it all together, their custom bikes in tow. Seems like they’ve been doing it from the start in the hope of moving the city forward. It looks like it’s working.

A very special thanks to Todd Scott of Detroit Greenways Coalition for helping to put this story together.