The Duo Bringing Vegan Street Food to Detroit. One Pop-Up at a Time 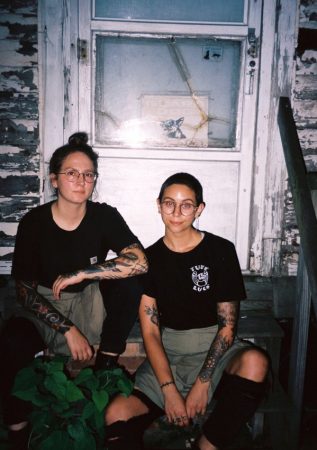 Meet Nina Paletta and Meghan Shaw: two women striving to make vegan food more accessible in the Detroit area. Under the moniker, Street Beet, the duo has been popping up regularly since May. While diverse in their offerings, they’re best known for their Taco Hell series—a vegan remix of the fast food staple, Taco Bell.

With lines around the door and a schedule that fits in up to three pop-ups a week—which is A LOT—their out of the gate success has given them the freedom to quit their day jobs and pursue food full time. What’s next? Something more permanent—”possibly a food truck.”

Looking to invest in Detroit’s next hottest restaurant? We’ve got your girls.

We caught up with them to talk food, Detroit and a few things between. 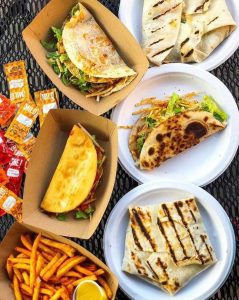 Nina Paletta: The name Street Beet was inspired by an “only funny if you were there” scenario when I was traveling in Nicaragua with some friends, and we found a large, dirty carrot in the middle of the street. I later decided that Street Beet implied well enough that I’d be making plant-based street food. Street Carrot didn’t roll of the tongue as easily.

NP & MS: It’s a guilty pleasure for both of us. One day we were out grocery shopping and drove past a Taco Bell. Meghan commented about how long the line was, and we joked about the idea of recreating their menu. The joke quickly became reality. Once we made the Facebook event page and started to see the attendee list grow, we knew we were on to something.

CVh: Where’d you learn to cook?

MS: When my parents separated my dad moved into an apartment—and let’s just say he isn’t big on cooking. This made me want to learn, so I would clip recipes out of magazines and various cookbooks, glue them into a binder and go for it.  I’m sure most of what I made was pretty awful, and I’ve never been very good at following recipes, but he always pretended they were great.  I’ve been interested in cooking and learning about food ever since.

NP: After a couple years of being vegetarian, I decided that I was sick of eating boring food and felt inspired to cook more creatively.  Some learning was through trial and error, some through internet blogs and some elsewhere. 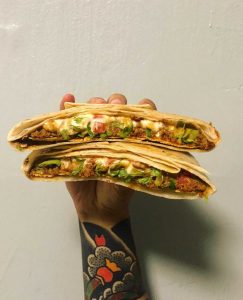 NP & MS: Definitely not forever. We have a lot of different plans in mind for the future. In the meantime, we’re going to continue learning and growing through pop-ups while saving money for more ambitious projects.

NP & MS: We both grew up in Metro Detroit, and have spent a significant amount of time living and working in the city. We want to be a part of the positive growth Detroit is experiencing and help provide more options for people to eat plant-based.

CVh: What time do you wake up?

NP & MS: We have the most inconsistent schedules in the world.

MS: Neither; I hate the sun.

MS: Somewhere in between a Taurus or Gemini.

CVh: Have you ever eaten meat?

CVh: Name one thing you don’t fuck with.

CVh:  Saturday night. Dinner reservations anywhere in the world. Where?

CVh: Where’s the spot for live music in this town?

CVh: Where do vegans eat at 3am?

NP & MS: Takoi. We aren’t sucking up. Really. We are there once a week.

CVh: Let’s take a daytrip. Where are we going? What are we wearing?

CVh: Tell us something we don’t know. Anything.

NP & MS: We’re developing a fully vegan menu for a new spot just outside of the city. We can’t say too much about it yet.

CVh: What’d I forget to ask?

CVh: When’s your next pop-up?

NP & MS: We are doing food for a couple of friends parties in the next couple of weeks but our next two big ones are: