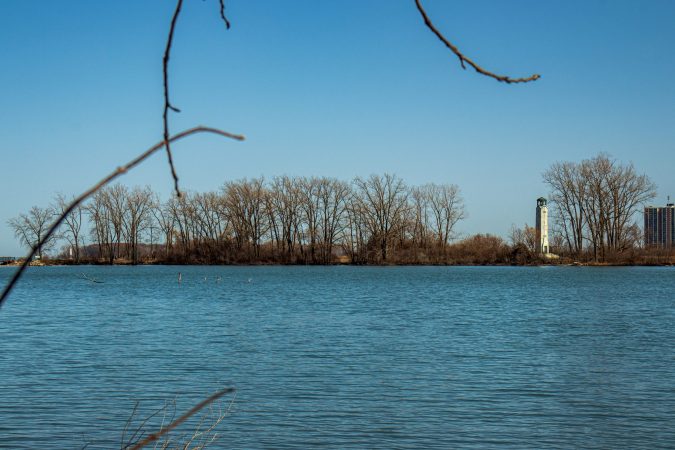 Belle Isle is called the jewel of Detroit for many reasons. Offering Detroiters an incredible outdoor space just minutes from downtown, from the aquarium to the Anna Scripps Whitcomb Conservatory, one can spend hours indoors and outdoors. But, the island’s nickname can also come from its unique ecosystem seldom present in the region anymore — the wet-mesic forest.

Differing from a swamp, Belle Isle’s wet-mesic forest makes up about 200 acres of the island, primarily on the island’s eastern side. Home to a diverse amount of plants and animals, flooding brought about by a changing climate has put the forest in a precarious situation.

WHAT IS BELLE ISLE’S WET-MESIC FOREST? 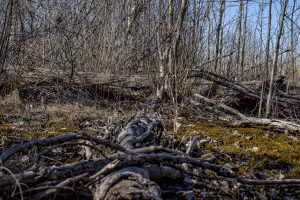 Wet-mesic forests differ from swamps in that they are meant to fluctuate between being wet and dry, never completely drying out, but also never retaining water as swamps or bogs do. As Amy Emmert, Director of Education for the Belle Isle Conservancy shares some — but not too much — flooding is good for the forest.

“It’s called wet-mesic because there is always some moisture. A little bit of flooding is what is needed and this allows for very unique, rare plants and wildlife that were once very common. Hundreds of years ago, they were all throughout Southeast Michigan, but now they only live here on Belle Isle,” shared Emmert. “It’s the seasonal floodwaters that really are the primary disturbance in making these water levels fluctuate.”

In a wet-mesic forest, trees such as the pumpkin ash and oak grow side-by-side, having adapted over the course of thousands of years to thrive in the slightly moist clay soil. The forest also provides food for the birds and animals that call Belle Isle home, serving as a vital stop for migratory birds making their way through the region.

With flooding in recent years, Emmert adds that many of the plants now face threats from having too much water present.

These aren’t swamp trees, there’s a huge difference and when we start talking about climate change and flooding, that’s when it gets really scary for this unique ecosystem, she added. Over thousands of years, these trees have adapted to this unique ecosystem, which is wet-mesic, not a swamp. It definitely is a type of wetland, but it’s just very different.

With the ecosystem facing threats, Emmert has worked with the conservancy to educate the public on the wet-mesic Forrest in recent years, working to help create videos while working to raise awareness around the plants and animals that call Belle Isle home. As she added, the growing interest in Belle Isle’s ecosystem as of late does help in the fight to protect the wet-mesic, as it leads to a better understanding of forest and more funding to study it.

FACING FLOODING AND A CHANGING CLIMATE

Flooding has been a thorn in the side for much of the Detroit River region in recent years, with communities like that of the Jefferson-Chalmers neighborhood facing increased threats from flooding in recent years. 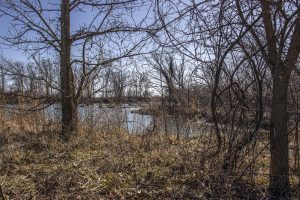 “With rising water levels and climate change, it’s [Belle Isle] particularly vulnerable. With climate change in general, we’re going to have warmer, wilder, and wetter conditions,” stated Hartig. “One of the things we’ve noticed in the past couple of years is that when you have strong east winds, it blows that water into Belle Isle from Lake St Clair. It blows it in, causing Blue Blue Heron Lagoon and Lake Okonoka to overflow and where does it go? It goes into that 200 acre, old-growth, wet-music forest.”

“When you have these sensitive habitats, like this 200-acre old-growth forest, it can handle a little bit of water, but it doesn’t want lots of water for long periods of time. So, you know, it’s almost like an uncontrolled experiment now with all that water on hand,” Hartig added.

As Hartig also added, the blowing wind that flood Belle Isle is the same that contribute to flooding in the Jefferson Chalmers neighborhood, leading to the need for things like tiger dams to mitigate flooding. On Belle Isle, a system of pumps is in place to remove floodwater, but the system is outdated, with many pumps breaking in recent years.

While the Michigan Department of Naural Resources [DNR] do their best to work with the existing system of pumps on Belle Isle, Emmert shared who at the Conservancy — who manage the aquarium and serve an advisory educational role — saw first hand how hard it was to eliminate water from the most recent round of floods. With a few pumps breaking, the repair process often led to more and more issues occurring due to their age.

A problem not specific to the pumps on Belle Isle, Emmert brought up the fact that climate change and the extremes of weather fluctuation can take their toll on infrastructure systems.

Ultimately, our manmade structures aren’t going to be able to handle this and it’s going to cost us, she shared. Whether it’s flooding over the beautiful riverfront or properties and marinas, or, even more, severe droughts, that’s a natural fluctuation. But if we start to see some of these extremes more frequently, it’s going to cost us economically in so many different ways.

SOLUTIONS BOTH BIG AND SMALL

Yet, while the climate situation may seem bleak, solutions to flooding and the changing climate exist and can range from individual-level changes to nationwide solutions. As both Hartig and Emmert share, education and awareness are key, as is the idea that this is a fight we all must go at together. “I think, to solve the climate change crisis that we’re facing right now, it’s going to take everyone doing their share and playing a role because we all contribute to the problem,” shared Hartig while discussing climate change solutions. “You can buy an electric vehicle; you can take mass transportation, you can walk more, you can choose renewable energy sources on your DTE Energy plan, you can advocate and lobby for living up to the Paris accord.”

“We can help educate our neighbors; we can tell them how important this is, not only to our generation but to the generations that will follow,” he later added.

In regard to flooding prevention, Emmert brought up the need to absorb and collect water in the ground rather than sewers and waterways. Larger solutions can range from the creation of wetlands and land reclamation to aspects individuals can take, such as installing rain guards to creating gardens in urban areas like downtown Detroit.

“The more water we can keep out of our sewer and water systems, the better,” stated Emmert while discussing the perks of allowing water to absorb into the ground. “It naturally gets filtered to get some of the pollutants and chemicals out, while it also slows it down to where it needs to go so it can refresh groundwater instead of being put into the rivers, making the water rise faster than it actually should.”

Overall, the matter of climate change can be a jarring discussion for many, with the problem seeming large and intimidating. Being the Director of Education for the conservancy, Emmert often talks about the larger aspect of climate change, finding that adding context to the problem is often the best way to get through to people.

“When you talk about it [climate change] in context, that this is your life, this is the air you breathe, this is the water you drink, whether you live on a one-block area or you have acres to plant, that’s your world, that’s all you know and climate change can directly affect it,” shared Emmert.