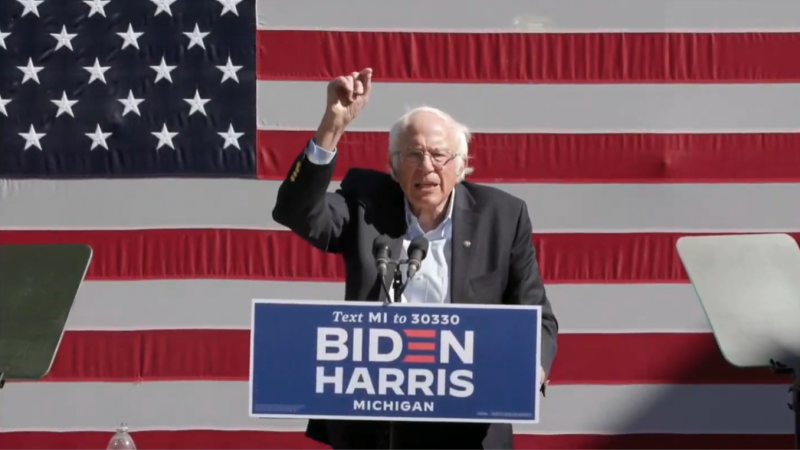 In an effort to boost turnout in support of Democratic nominee Joe Biden, former candidate and Vermont Senator Bernie Sanders visited Michigan this week, where he held two small rallies in support of Biden. Sanders, who made a strong run against Biden in the Democratic Primary, used his position with younger people and left-leaning voters in an effort to encourage both demographics to vote.

Making his first stop at Kerrytown Market & Shops in Ann Arbor, Sanders held a talk, where he stressed the need for younger people to vote in an effort to oust Donald Trump. The Senator stressed the need amid a time when the voter turnout among younger Americans is lower than older demographics.

As wonderful and idealistic as our younger generation is, it has one major political shortcoming. It does not vote in large enough numbers, Sanders stated during the rally. The voter turnout among young people has improved in the last few years, but it still has a long way to go.

“It is not enough to complain or to moan and groan. We’ve got to fight back, and the first way is to vote,” he added.

After speaking in Ann Arbor, Sanders went to the second rally in Macomb County, where he aimed to push for Biden in the county that very firmly stands with Trump. The rally saw those attending stay in their cars to maintain social distancing, while the Senator spoke on a stage to attendees.

In typical Macomb fashion, however, the speech at Macomb Community College was interrupted by a member of Women for Trump, who unfolded a massive Trump flag and refused to cease her interruption, which led to the cutting of Sanders mic. The show came to an end after campus police escorted the woman out.

In the parts of the day that weren’t interrupted by demagoguery, Sanders spoke of Biden’s record on healthcare, saying that the candidate would cut costs. He also stressed the need to combat climate change, touting the very hopeful idea that Biden is the only candidate prepared to address the crisis.

Sanders also continued to stress his message that everyone needs to come together to support Biden, given the unprecedented stake of this election.

“Brothers and sisters, this is the most important election, not only in our lifetime but in the modern history of our country,” shared Sanders. “The stakes involved in this election, not just for us but for our kids and future generations, are of enormous consequence.”

With the election less than a month away, the stakes have never been higher. Ensure you’re prepared and registered to vote by checking our guide here.