The Albert Kahn Building, Re-contextualized by Design and Architecture Firm Gensler, the Building Will be key to the Mobility Innovation District Work Experience 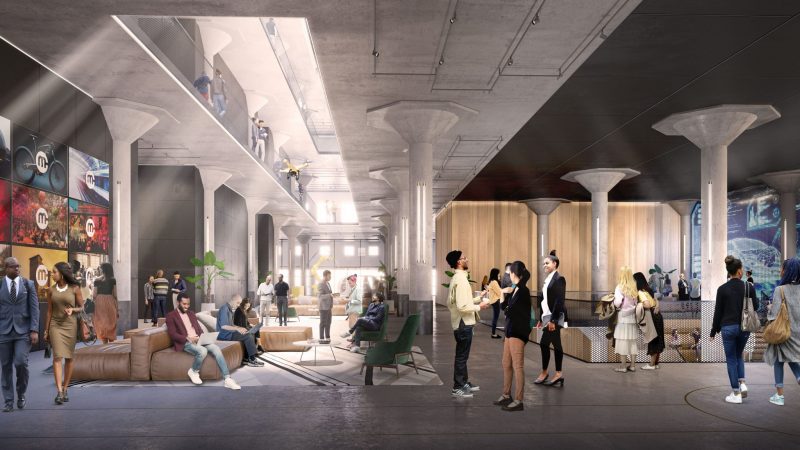 Corktown, Detroit’s oldest neighborhood, is ripe for development, with large projects such as Michigan Central Station the soon-to-open Michigan Train Station re-development project that’s underway. Adjacent and part of the larger project from Ford Motor Company is the renovation of the long-abandoned Book Depository, a project that will see the historical building transformed into a state-of-the-art innovation nexus.

Designed by global design and architecture firm Gensler, from its Detroit offices, the Book Depository will be one of the first buildings to open in the appropriately named Mobility Innovation District once it is completed. Positioned as an industrial center, it will feature maker spaces, labs, and mobility studios while applying technology to create flexible work environments.

RENOVATING AND DESIGNING THE BOOK DEPOSITORY 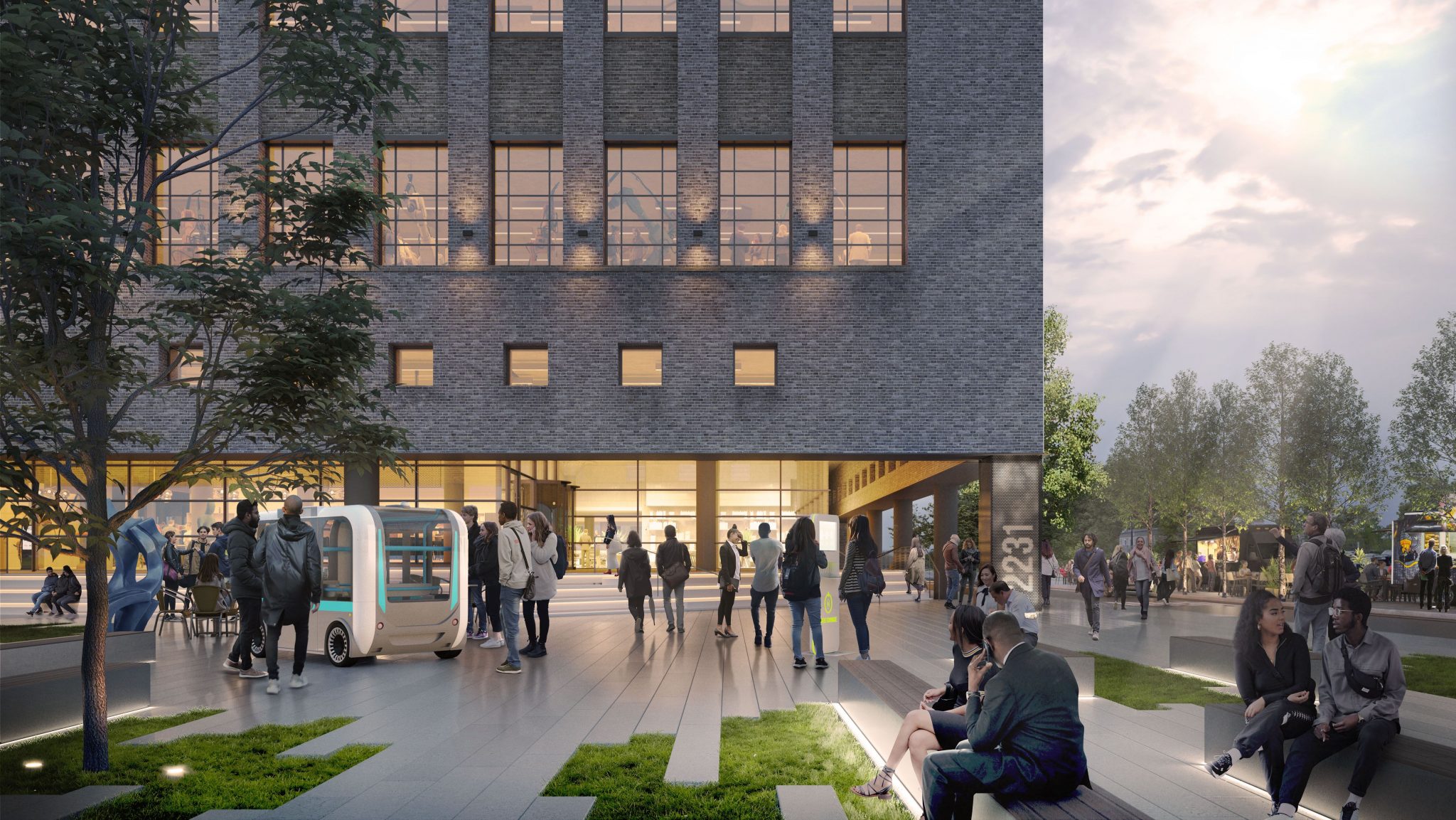 AN OUTSIDE RENDERING OF THE BOOK DEPOSITORY. PHOTO GENSLER

The book Depository was originally designed by the “architect of Detroit” himself, the late Albert Khan, notable for his designing structures such as the Fisher Building and the Ford River Rouge Complex. A stout, historically resonant, three-story brick building, the Book Depository was meant to be a partner to Michigan Central Station in its prime, connected via tunnel to the station.

In a nod to its past, the building’s spot in the future mobility district will see its connection to Michigan Central Station return. Given the historical significance and attachment to Khan’s name, Gensler aims to preserve as much of the old structure as possible while also adding a modern feel.

“We wanted to maintain the architecture, so the exterior brickwork, all the concrete framework, including these really gorgeous robust columns with martini caps,” stated Lily Diego, the Gensler Design Director on the Book Depository, when speaking about the project. “So those are all going to stay within the building. As you walk through, you’re going to experience the history of the building itself.”

We tried to be very thoughtful in that all modern intervention would be clean and of the same narrative. That it was about mechanics, it was about structure and infrastructure. Anything that we did add provided that type of modern narrative of what innovation looks like, today, she added.

As far as connecting with Michigan Central Station, the completed project plans to keep the tunnel connection intact while also incorporating new factors. The raised rail lines alongside the building will be turned into a mobility platform, allowing easy access to the station, while extended platforms will blur the lines between the exterior and interior of the building.

The building’s interior is where things get interesting, with space for drones and robotic deliveries, amenities, and flexible open workspaces. In an era of working remotely, the Book Depository will be equipped to allow easy communication with coworkers at home or abroad.

The team at Gensler aimed to design a comfortable work environment, one where an individual may choose to work in a focus room in solitude or an open seating area. Part of this flexibility also involves embracing new technology such as robotics, something that the Book Depository will be incorporating.

“There’s this four-story atrium in the buildings that will allow a vertical circulation for anything, equipment, drones, you name it, to fly through it. Mainly we wanted this foremost to be for light infiltration and visual connectivity, but also for the platform of what the future of robotics looks like if things were to be mobile in that direction.” 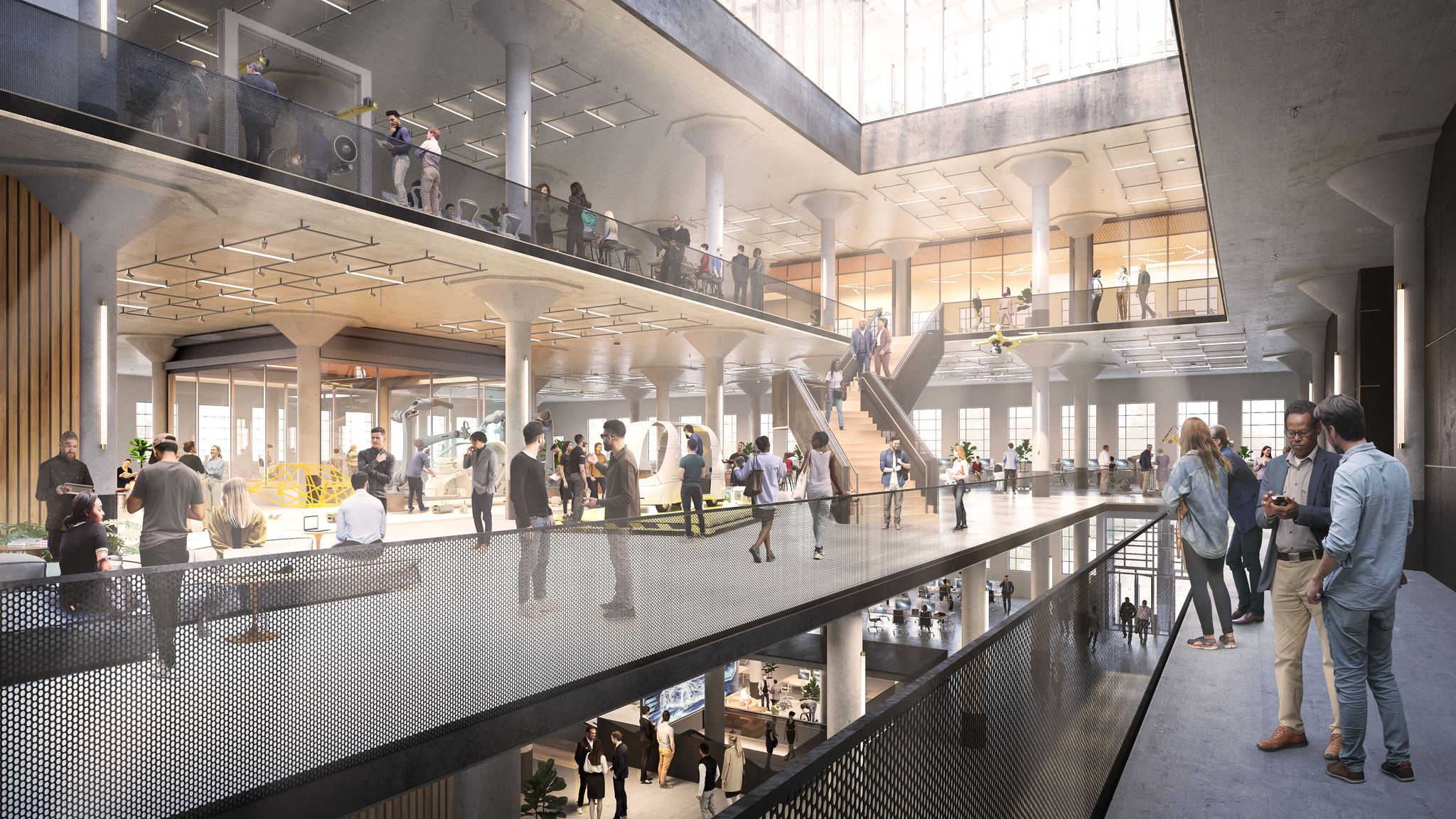 A RENDERING OF THE BOOK DEPOSITORY ATRIUM. PHOTO GENSLER

While there is not yet a defined date for completion, once finished, the Book Depository will be a unique work environment, one pushing the bounds of what a workspace can be. One factor that also stresses the importance of the building to the community and region is its focus on mobility and connectivity.

Being that Corktown is shaping up to be this massive mobility corridor, the Book Depository fits right into the mindset. Centered near Roosevelt Park, the building will allow for easy access to the planned Greenways, the West Riverfront, and Michigan Avenue while also incorporating easy access for alternative mobility options such as bikes.

“We definitely have base building amenities that provide for the full comfort of anyone who’s in there, whether it’s a tenant working or someone who is a part of the community at large,” shared Diego.

When we’re looking at mobility, we’re assuming that a lot of individuals are going to be biking, so we’re making sure that all of the stair rails have this thing called a runnel that allows you to easily get your bike clipped into the stairwell and get it to the bike storage on the lower level,” she added. “We’re making sure that we have the basics for everyone who’s trying to live a balanced lifestyle between bike storage, between how you’re going to get your bike in a stairwell, making sure there’s mothers rooms, meditation rooms, prayer rooms, there’s always areas of respite or comfort that take you away from the workplace.

Find more renderings of the Book Depository project on Gensler’s website and subscribe to our newsletter for more updates on Detroit mobility, innovation, and more.