A Story of Success Through Community 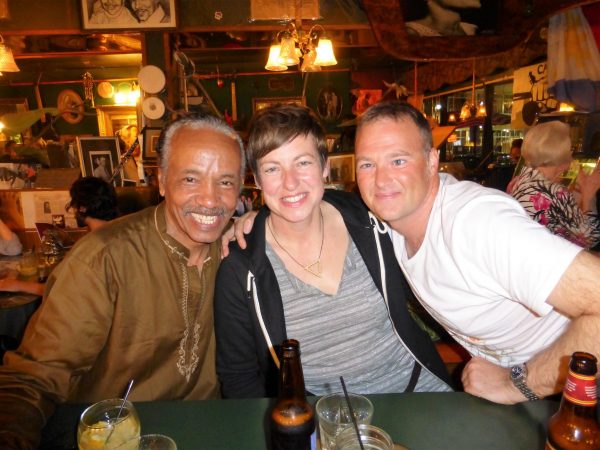 Success can be attributed in many different ways, but for the owner of ten hair salons, business development property, a high-end restaurant, and Cafe D’Mongo’s, Larry Mongo, the story behind his success is one that begins humbly, with the word hello.

Mongo spent his growing years in Royal Oak Township. As a neighbor to Oak Park, he was exposed to Jewish culture. Although he isn’t Jewish, he grew up heavily influenced by the Jewish value system, which stressed education and business on the young, so he felt pressed to educate himself and go into business. He noticed as well that the Jewish culture pushed the next generation, so he pushed himself. He learned a lot from the people and their backgrounds. “A lot of people there were Holocaust survivors,” says Mongo. He went on to talk of his admiration of their ability to put that in a back part of their brain. “They didn’t forget their history, but they knew it’s hard to drive forward while constantly looking in the rearview mirror,” he says. “But for some reason, they knew how to compartmentalize this horror and keep moving forward.” He continues by saying he adopted that way of thought. He kept black slavery in the back of his mind, compartmentalizing it, using it to push him forward.

Mongo married his wife Dianne at age 18, had two children, and went to school to be a journeyman tool and die maker. He became the youngest in the country at age 21. While he worked 40 hour weeks, he found himself making a large salary and was confronted with the question of what to do with it. He felt the Jewish culture’s outlook bubble up inside him and he decided to do what those in the Jewish community would do: invest. Mongo’s wife, around this time, began to look for a career for herself since their children were in school for most of the day. She decided to find work at a barber shop upon learning of the stability of the career. She soon became a preferred barber by most who came to the shop. “She was professional,” says Mongo. “There was a large black middle and upper-middle-class that was living downtown and they wanted that real professionalism.” He noticed this, saw an opportunity, and invested.

Two years after Dianne began her work as a barber, the Mongo’s opened the first D’Mongo’s—a barbershop. The success of the business was potent and spread to fill nine other locations around Detroit, each exhibiting the same professionalism she started with. Mongo soon after acquired retail space in the Himelhoch plaza. This featured one of their ten salons, space for a few of his aunts to sell their clothing lines, and a high-end restaurant in the back of the building.

Even with his successes, Mongo was confronted by challenges. Sometime after the Himelhoch plaza was opened, he went to meet a few acquaintances at a club. He found himself being denied entry when he arrived. Someone recognized him after a few moments, and to his disdain they were then all too excited to let him in. Their reasoning was then explained as a dislike of black people being in the club. Mongo, upon hearing this, denied the insincere, newly granted ability to enter, and left. He didn’t want to allow them to perpetuate their unjustified ways of control over certain people. “I always tell my black friends, I became Jewish,” Mongo says. “They don’t fight and argue with you, they just say “what you have is great, I’ll go duplicate it myself so I don’t have to get my feelings hurt anymore.” That’s always been my motto.” Mongo left the club to walk back to his office in the Himelhoch building. He passed by a building for sale on his way back, and his motto struck him. Mongo decided to purchase the building and make a club for the people. A club of inclusion, diversity, and something that wouldn’t hurt his, or anyone else’s feelings, anymore. Cafe D’Mongo’s was born soon after.

Cafe D’Mongo’s, open and thriving originally from 1985 to 1995, was boarded up through the ’90s as the city went through many financial crises. Mongo visited his club often throughout the years, and every person he saw, he greeted. “The word ‘hello’ built my business,” he says. People were shocked when he would call greetings to them. Some people ignored him, but some responded with his same tenacity. Mongo soon became acquainted with those who responded positively. He calls these people the early pollinators, the people who lived with the tumbleweeds. They rooted themselves in the lofts downtown and were interested in making something that was once great, great again.

Mongo sometimes had friends visit the Cafe as the early 2000’s crept by. His befriended early pollinators were attracted to the life that had sprouted in the empty downtown like moths to a flame.

They asked Mongo when he would reopen, excited for some sort of nightlife to return to the city. Mongo never answered directly, unsure if he ever would, until one day when a drunk driver drove through the front window of the building. The Early Pollinators ran to the scene, creating a human barricade, to keep homeless and squatters in the area from stealing what was inside. Mongo saw this when he arrived at the scene some forty minutes later and couldn’t help but feel blessed by the community. One of the people protecting the building said, “We told you that you should open!” 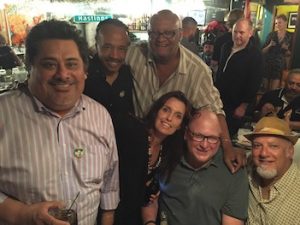 Cafe D’Mongo’s reopened in 2007, and invited those who had protected it in. The crowd grew steadily, and hours were extended as the city began to reform around the club. Mongo kept the word hello close as he greeted everyone who walked through the door. The community soon spread and now Cafe D’Mongo’s hosts people from all over the world. It is a community built on hello.