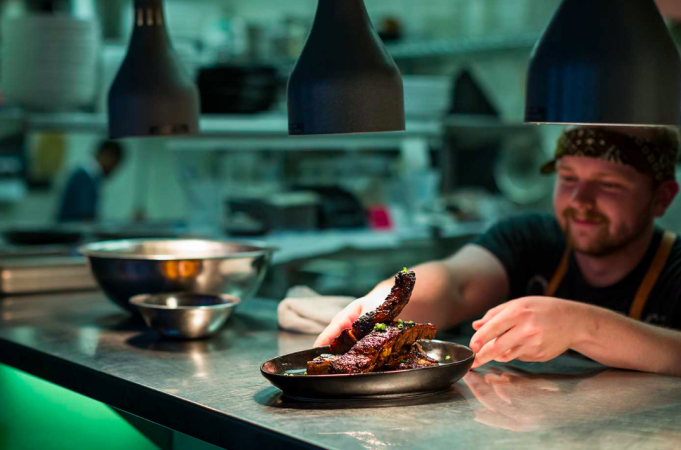 The interpretation of Detroit through each individual differs. Yet what all Detroiters have in common is the love and passion for their community.

Detroit has gone through many changes over the years, Detroitisit has decided to take a closer look into individual perspectives on how the city has changed, where they anticipate the city to be in the coming years, and what Detroiters can do to support the local community. We are hearing from local business owners, chefs, and community members to understand individual perspectives, passions, and predictions surrounding the city of Detroit.

This week, we chatted with Sandy Levine, owner of Chartreuse Kitchen & Cocktails, who undoubtedly loves the city of Detroit through and through. The part that holds near and dear to his heart? The people. Sandy shares details about his journey around the United States years prior and the variable that always kept wanting to move back to Detroit as if there was a magnetic force attracting him back: the people. According to Sandy it’s the character, passion, and patience that all Detroiters encompass.

Chartreuse Kitchen & Cocktails operates on the philosophy of “good mood food” incorporating the values and expectations set by Levine. The restaurant strives to support local farmers, make customers feel as if they are dining at home, and ensuring all employees that are hired radiate positivity and happiness – something we all need a little bit more of right now.

The interview with Sandy proved that the restaurant’s philosophy directly comes from the owners, and pride for Detroit.

HOW DID YOU END UP LIVING IN DETROIT?

“Both of my parents grew up in Detroit. I was born in the city and I lived in the suburbs a lot of my life, but before my wife and I got married, we bounced around the country quite a bit. I’ve always had an inherited love for the city from my parents. Specifically, my dad always had a strong love for the city. Throughout my life, even in the 80’s when I was a kid then throughout the 90’s and 2000’s, even when I was in different parts of the country and people would speak poorly of it. We were always taking the stance of defending it and it solidified that Detroit was where we wanted to be.” 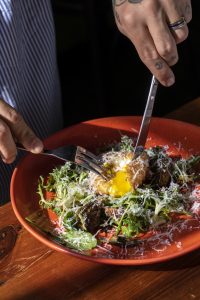 WHAT BEST DEFINES DETROIT FOR YOU?

“When I moved away with my wife, the thing we missed the most about Detroit was first and foremost the people. I don’t know if it’s a Midwest thing or a Detroit thing, but the people in Detroit are real and the relationships that you have with them are sincere. The realness and the depth of the relationships that we have with people in Detroit are different than they have been anywhere else.

Next, we have the food. Obviously food is a huge part of my life and has been, my whole career and long before that. I would argue that the food in Detroit is as good as anywhere else. There are probably more selections in cities like New York or Chicago, but there are so many different foods from different parts of the world that I think are really better here than anywhere else I’ve experienced. The places to eat and the selection of quality food is really better than anywhere else I’ve been.”

HOW DO YOU ENSURE GOOD PEOPLE AND GOOD RELATIONSHIPS ARE APPARENT AT YOUR RESTAURANT?

“At Chartreuse Kitchen & Cocktails, we’ve always hired people more based on their personality than anything else, including their experience. The mechanics of service and which hand to use to put down a plate or how to pour a glass gracefully are all things that are easy to teach. On the other hand, being a kind, empathetic, and caring person is not something that’s as easy to adjust in a person.

Starting off with being kind as the main prerequisite to work there has made everything way easier. Not only in terms of providing hospital hospitality to the guests, but employees being there, eight to 12 hours a day together. The fact that like most of us coming to work or are happy to come into work, make a huge difference in the general workday. It makes it fun and it reflects on the guests as well.”

WHERE DO YOU SEE DETROIT HEADING IN THE FUTURE? 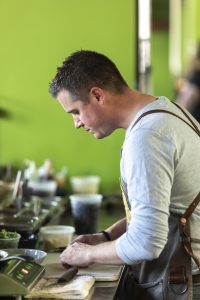 “I worked in the city, on and off for 20 years and it’s changed quite a bit over that time. In terms of how it is now, I think there’s a lot of optimism for where it is headed. I think that there’s certainly tons of challenges, obviously, even without COVID-19. Right now, everything is just kind of chaotic, because of COVID-19 but I think once, that element settles down a little bit, I feel optimistic that there will be more unity than there has been over the past – it will make us stronger over time.

One thing that I really loved about previously working at Atlas Global Bistro, a restaurant that I kind of felt was a little bit ahead of its time – was the feel of diversity in the customers. There would be a Wayne State University student in a hoodie and flip flops next to somebody in a tuxedo that had just come from the Detroit Symphony Orchestra, or customers that live in the neighborhood, a table from suburbs, concert goers, sports fans – you name it. I think that it kind of swung over in to the opposite direction the past five years. There were places that were sports bars and places that were hangouts for theatre-goers, there was a divide. I feel it’s eventually going to swing back in that direction of unity and everyone hanging out together.”

HOW HAS 2020 AFFECTED YOUR RESTAURANT? 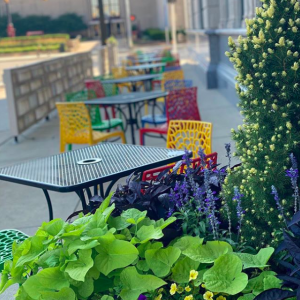 Our first concern when this started happening was to make sure that our staff was safe. When we were shut down in March, personally the first thing I did was just tried to secure some of the loans to make sure that we could pay our bills because we couldn’t be open in any capacity. Once we could start doing carry out, we waited probably an extra month, just to make sure that there wasn’t another kind of outbreak and we did the same thing once we learned we could be open inside.

In all cases, we ensured that we were safe ourselves, first and foremost, and then by default, if we knew that we were going to be safe, that would mean that our guests were taken care of as well. The survival of ourselves, of our guests, and of the restaurant itself, is kind of where we are at and where we’ve been for the last six months. I certainly hope that we can continue to make progress.”

“We’re open for indoor and outdoor dining, pending weather. The restaurant is open a little over 30% capacity. When we previously expanded that patio, it was extremely helpful to our business. But the patio will no longer be sustainable on its own when it gets cold and we head into winter. We are taking everything day by day.”