After Four Years of Disastrous Environmental Policy, President Biden Will Need to be Pushed on a Multitude of Matters, No More Important Than Climate Legislation 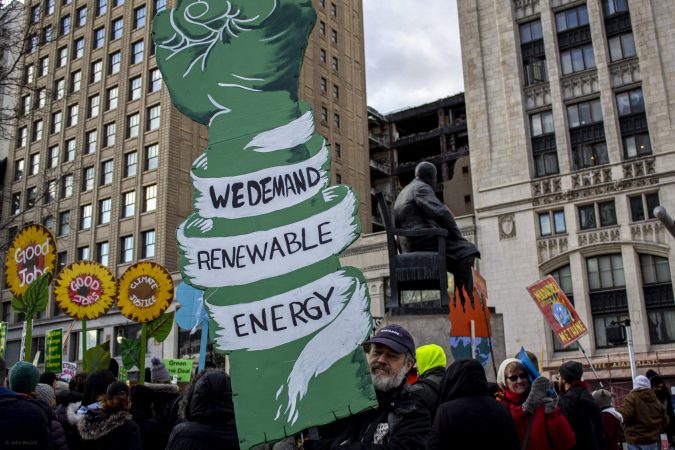 Calling the last four years a disaster for environmental policy seems like an understatement given the now former President Trump’s disregard for anything remotely addressing climate issues during his term. Even with the new President Biden, the fight for climate justice remains the same. While possessing much more rationality than Trump and also running on an ambitious climate plan, Biden will need to be pushed relentlessly to ensure he lives up to the plan he ran on.

When the race to replace Donald Trump began and dozens of Democratic candidates gathered for the second round of debates in Detroit, thousands rallied outside the Fox Theater, calling for demands on climate change. That fighting spirit remains strong, and in a frontline community like Detroit, activists and organizers are not afraid to push the new Democratic president on matters including climate legislation.

Speaking with some Detroit-based climate organizers, let’s talk President Biden and the environments, as well as what a frontline community is and why communities like Detroit are all the more vulnerable in the face of a changing environment.

First and foremost, after eliminating his progressive challengers, Biden was more or less coerced by left-leaning groups into running on a more ambitious climate plan. While in no way fully endorsing the ambitious Green New Deal, Biden at least supported rejoining the Paris Climate Agreement, working to curb emissions and, in minor ways, address the larger effects of the changing climate. A good start, but one that is easy to back off from in the face of conservative pushback from members of the Democratic and Republican parties.

Thus, in part of the “settle for Biden” mindset that emerged once he became the nominee, it was obvious Biden would need to be pushed to ensure promises are kept. Keeping optimistic, one thing that’s clear right off the back about Biden is that he will not be outrightly hostile to the climate, much like Trump was. From the organizers’ perspective, the removal of Trump from office is a good first step and in the lead-up to his inauguration, many in communities like Detroit were cautiously optimistic.

In Detroit, Jamesa Johnson Greer, the Climate Justice Director with the Michigan Environmental Justice Coalition [MEJC] — a coalition of more than 40 organizations across Michigan —  shared that while optimistic, some of Biden’s appointees raise questions given their less-than-stellar background. But, she adds, while a lot of focus is on the federal level, people do have more say over state-wide environmental policy, which has just as big of an impact on frontline communities.

“I think that people had a lot of hope and I know from our community, there’s a lot of hope that Biden would go more left-leaning with the folks who chose to appoint. Some of those appointments have looked that way, but for the most part, they’ve been relatively moderate,” stated Greer, when asked about her thoughts on the incoming Biden administration. “Then there’s some question of folks who have a background in the fossil fuel industry, right? And their connection to the environment and working within the administration. So it makes you wonder how far are we actually going to be able to push and move this administration and how important and critical that really is to our work.”

“What we do have control over is what happens in our states, what happens within that agency and administration and how we can actually push the agencies. I think that there’s still hope because people power is so much stronger than we even recognize,” she added.

This idea of people power is something that stands across the board, as it was people power that ultimately led to Biden beating Trump. When looking t climate change, the idea is the same, communities need to engage with their elected officials, attend community meetings and make their voices heard.

Andrew Sarpolis — Senior Organizing Representative with the Sierra Club in Michigan — stressed this idea of getting involved when asking about what people can do to organize within their own community to push the Biden Administration.

“The most important action is getting the attention of elected officials by going to community meetings, writing letters, calling offices, and setting up grassroots lobby meetings to make this a critical issue for them, from the local to federal level,” shared Sarpolis. “We need our leaders to understand the nature of the problem and take an active part in drafting equitable solutions. The City of Detroit has taken some first steps: establishing a sustainability department, doing a greenhouse gas inventory, and setting some goals. But, these goals are not ambitious enough.”

“Furthermore, communities need to have labor partners at the table
as we organize,” he added. “We need to support environmental justice leaders as fossil fuel assets retire in frontline communities. If labor unions and frontline residents can draft solutions from the bottom-up, it will create leadership which will guide our elected officials to the best strategies.”

ADDRESSING THE NEEDS OF FRONTLINE COMMUNITIES

In talking to organizers, the term “frontline community” is used a lot to describe Detroit and it’s a term meant to showcase that Detroit — and countless communities across the planet — are on the frontlines of the fight against climate change. Not just outright environmental effects such as rising sea levels and temperatures, but also economic effects of climate change like disinvestment and job loss, as well as matters around transitioning into a green economy.

For Sarpolis and Sierra Club, he shared that this transition is just one of many concerns for frontline communities like Detroit.

“Equitable transition is the foremost concern. There are challenges with energy transition that need to be addressed. The River Rouge and Trenton Channel coal plants are major polluters and, of course, they need to be retired. However, their retirement also represents significant municipal income losses in places with chronic disinvestment,” shared Sarpolis. “Furthermore, there are lots of jobs that have been created from clean technologies. At the same time, though, there needs to be more training for frontline communities, helping people get access to those jobs. Distributed renewables and investments in energy efficiency are happening but, directing them where they are needed the most can maximize the impact. Finally, investments in climate solutions should include public transit. Detroit doesn’t have a high rate of car ownership compared to most U.S. cities.”

For Greer and many in the MEJC, there are immediate needs Biden should address, as well as long term matters. One issue pointed out again is that while communities like Detroit suffer, fossil fuel industries collect billions in subsidies, something that will need to change in the future fight against climate change.

I think that the administration’s commitment to deliver 30% of the climate and clean energy investment benefits to disadvantaged communities is something that he needs to deliver on,” shared Greer when discussing what she would like to see come out of the Biden administration. “I think that the need to address cumulative impacts of pollution and environmental justice communities through better permitting through administrative active actions to incentivize states to pass cumulative impact laws like New Jersey just did recently.

“But even, even beyond that right like thinking about how we can make a commitment to move away from fossil fuels, how we can make a commitment to reinvest in our communities, and then the question is always how do we pay for that?” added Greer. “But, the reality is, billions of dollars in subsidies go into fossil fuel industries while our communities are suffering and fighting for the right to breathe clean air. It just seems like a great issue that I think that the Biden administration could be tackling alongside the need to address the larger issues like emission reduction.”

With Biden now taking the stage as the 46th President of the United States, the clock is ticking. He has promised a slew of executive orders on his first day of office aimed at many issues, including climate change. If Biden does not deliver, then the activist spirit born under Trump will need to persist in the face of climate change, COVID-19 and other issues impacting communities like Detroit.

In the meantime, organizers, activists and concerned community members breath a brief sigh of relief in a new post-Trump presidency America while preparing to stand up and make their voices heard.