Why a Coalition of Organizers are Fighting for Climate Justice

As the Democratic Debates Took Shape in Detroit, Climate Activists Gathered to Make Their Voice Heard. 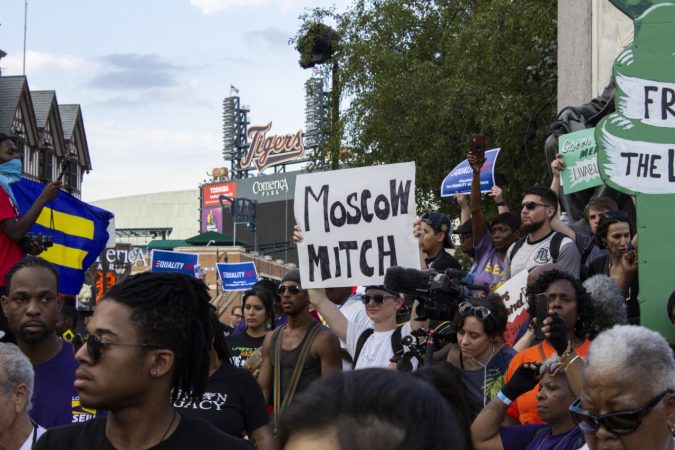 Did you hear the people sing last night? As all eyes were on the Motor City for the second round of the Democratic Primary Debates, a coalition of activists, organizers and community leaders from Detroit and out of state, gathered outside the Fox Theater to state the peoples’ demands.

Calling themselves the Frontline Detroit Coalition, the organizer’s demands were simple: they want climate change to be looked at seriously by the candidates on the debate stage. The group officially called for a Green New Deal, specifically for “good, clean energy, local union jobs, affordable and clean water, clean air, and a livable future for Detroit and all frontline communities.”

Starting the evening in Detroit’s Cass Park, The rally had more of a festival feel than political demonstration, singers were on stage while people danced in the crowd next to massive banners that were calling for a living wage. All the while, speakers from around Detroit came together, encouraging everyone to fight for their community.

What is the goal you may ask? Well, it’s simple, create a green economy, confront climate change, and fight for the betterment of cities such as Detroit.

Kim Hunter, of Engage Michigan, believes that the Green New Deal is essential to this fight, and says that the media forgets a lot of issues due to the popular “Detroit Comeback” story.

“Folks are still facing a lot of challenges, environmental, some economic, challenges with the water, just a whole plethora of things. And there’s still a jobs issue, we still need to come back to being the middle-class city that we were in decades past,” he stated. “We see the Green New Deal in being central to that.”

While Hunter believes that the Green New Deal is a good start, he believes there are matters of the legislation that need to be fleshed out.

“Right now, the Green New Deal is a fairly broad outline, and we want to put some meat on that in terms of the needs of Detroiters. We feel those needs are actually reflected in a lot of cities and in a lot of places around the country.” stated Hunter, “Another good thing it will do is bring jobs to the city, good unionized jobs, organized workers, not those at the mercy of corporations. We are also looking to put energy into the hands of the people, rooftop solar power, wind, battery technology.”

While members of Frontline Detroit recognize these issues, the presidential candidates may have the same mindset. According to Theresa Landrum, part of the 48217 Community and environmental health organization, many of those running for president are out of touch with the needs of most Americans.

Landrum also believes that in the event of the Green New Deal not being taken seriously enough by America’s politicians, people will need to take the fight into their own hands.

The people echoed Landrum’s words, as the crowd of demonstrators stretched from the Shinola Hotel to Grand Circus Park, packing Woodward avenue with chants, signs, and people from affected communities around the country. Anti-War protesters stood arm-in-arm with climate activists, who, in turn, supported labor organizers and those fighting for better public transportation.

One matter easily noticed is that while groups that attended the march such as the Sunrise Movement, Extinction Rebellion, and the Sierra Club represented larger distinct issues, the story of the night for every banner and sign that passed the debate hall was that they were all fighting for the issues that affect communities such as Detroit at a local level. From environmental justice and healthcare to economic equality and the right to unionize.

The last group to march past the Fox was the Detroit chapter of the Democratic Socialists of America. Turning out in an incredibly organized fashion, the group came with massive banners calling for a Green New Deal and an entire marching band clad in yellow reflective vests similar to those worn by members of the Yellow Vests Movement.

An unnamed representative from the organization blames the current economic state in Detroit and other cities across America as one of their main reasons for the group taking part in the rally.

“Detroit is the flagship for the future of the country, and it is ground zero for industrial cities through the Midwest and throughout the country.” They stated. “So a Green New deal, starting with the infrastructure we have by putting people to work, could be an example for the rest of the country and a parallel to what the city has done on the negative side from the downfall of its industry and manufacturing to the effect of globalization, Neo-Liberal policies, and capitalism on the people here.”

Playing music and drowning out the chants of the few dozen counter-protesters that had loosely gathered, the behemoth of a march ended shortly before the debate, allowing those interested the time to see if their demands had been heard by the candidates.

Dispersing among the mix of construction barriers, entertainment spots, and restaurants, the coalition that appeared to be made up of thousands melted away in a coordinated and organized manner, disappearing back into their everyday lives.