What a Democrat in the White House Could Mean for Detroit

The Second Democratic Debates Took Place in the city. What Did That Mean for Detroit? 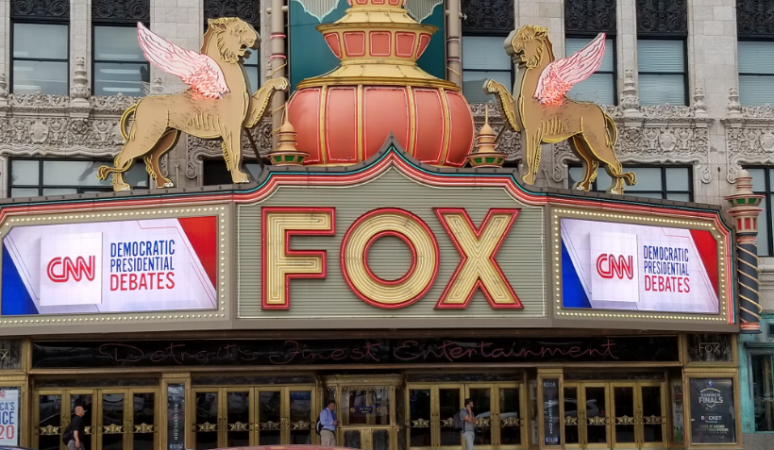 After hosting the Democratic Primary Debates, Detroit welcomed the politicians, pundits and provocateurs who could potentially define four years of the city’s – and the country’s – history. However, among other prominent cities in America, Detroit holds a different status. Both in terms of what we have, and what we desperately need. In reality, policies for the benefit of the rest of the country could still leave Detroiters behind.

Detroit’s recent history has developed into a precarious situation. The combination of an under-educated population with the systemic poverty around much of the city means that Detroit lags behind most other post-industrial economies.

Almost half of the city’s working-age population isn’t even looking for a job. Although it’s not hard to understand why. A quick look at entry-level openings on google shows that even these types of jobs require a bachelor’s degree, clean criminal background, or at-home access to internet; much of which is reported to be lacking in Detroit’s index of opportunities.

And despite the graduation rates of the city on the rise, students within Detroit proper still dropout of high school at twice the rate of Michigan’s average. These statistics show that some of the most popular programs in Democratic frontrunners’ policies, like college tuition for all, more-or-less would not be within reach for the vast majority of Detroiters.

A week after the Democratic Primary Debates were held in Detroit’s historic c, the frontrunners Joe Biden, Bernie Sanders, Elizabeth Warren, Kamala Harris, and Pete Buttigieg. put urban America at the center of their platforms.

However, despite the geography of the debates, the City of Detroit itself was barely mentioned onstage. News outlets around the country scrambled to fill in the blanks for what a democrat in the White House would mean for the largest municipality to declare bankruptcy in the United States.

And many of the same outlets who touted the setting of the debates as an opportunity to connect with c, voters are now throwing their hands up at what they see as a missed opportunity for the party.

So, what would the platform of a Democratic candidate look like in the minds of Detroiters? Some renewed efforts like labor union benefits won’t do much when manufacturing jobs are flowing away from Rust Belt Cities. And with Metro-Detroit’s being home to some of the largest hospitals in the country, critics are still hotly debating how healthcare costs should be re-evaluated.

Joe Biden – Middle of the Road

The primary issues that five of the candidates are running on. And what their realities would look like for the City of Detroit

Education: Moving away from the pack on college funding, Joe Biden wants to focus on tripling funding for predominately low-income school districts in Title I School Districts. However, with a history of a lack of results within DPS, this may be seen as a blanket solution rather than a chance for systemic improvements.

Economic Opportunity: As the highest-polling candidate who supports a $15 federal minimum wage, his work would maintain that each person with a job would be living above poverty for a 40-hour work week by 2025. But the best way for this to work would be by combining it with a Green New Deal, which has less of a chance to pass with that stipulation.

Environmental Protection: His stance on a Green New Deal is a bit middle-of-the pack for a field of Democrats more-or-less approving of the policy. But after a long history of over-reliance on manufacturing, the economy of Detroit would benefit from the new industries that a renewable energy overhaul could bring.

Social Programs: As one of the major figures that initially passed the Affordable Care Act, his goals are to expand it by providing a tax credit on public health insurance options.

International Affairs: Biden wants to renegotiate trade agreements that have sent many of the manufacturing jobs away from Detroit to other regions of the world by ensuring fair labor and environmental practices within the agreements. However, this is no guarantee that the companies that used to operate in the city will ever be able to again.

Education: Sanders sees the disparity in education quality between wealthy and low-income schools as a civil rights issue, rather than simply an economic one. His plan to create transparent and accountable charter school systems seems to be catering directly to Michigan after the Detroit Free Press broke a story on mismanagement in state-wide charter schools.

Economic Opportunity: With Michigan’s auto-manufacturers steadily moving their factories abroad, many of the biggest employers have moved opportunities out of the City of Detroit as well. His plan to eliminate the incentives to move abroad could help limit this trend. However, the recent plan to expand a General Motors plant in Orion Township is indicative to larger issues within industry flight to the farther-surrounding cities of the metropolitan area.

Environmental Protection: Sander’s backing of a Green New Deal gives an outline of which industries will be affected and which will not. And while there are job promises in the future of renewable energy, employees of the energy industries that operate within the city may have a difficult time.

Social Programs: Around 55% of Detroiters depend on Medicare or Medicaid for their health insurance coverage. Since the 2016 election, Sanders has been touting his Medicare for All plan that would bring coverage and costs to be more comparable to countries like Canada.

International Affairs: Some of the details on his international trade policies are a little unclear as of now. His focus seems to be on establishing a comprehensive manufacturing system for American goods to be bought and sold within the United States, which may be another win for auto manufacturing jobs.

Elizabeth Warren – On the Senate’s Left Side

Education: Most prominent is her plan to cancel student-loan debt for up to $50,000 for everyone. This means more affordable colleges for people through public universities like Wayne State University. Economic Opportunity: As part of her Economic Patriotism agenda, Warren wants to establish a $7 billion fund in order to close the gap in capital for businesses that are started by African American Businesspeople in the United States.

Environmental Protection: Like most other candidates, Warren wants to establish a connection between job opportunities and green infrastructure with a plan that taps into what the New Climate Economy reports to be an estimated $26 trillion in economic benefits by 2030.

Social Programs: Detroit’s maternal mortality rate is triple that of the rest of the country. Warren has completely outlined a plan to hold healthcare institutions accountable for what her campaign has outlined as a disparity in the concern for African-American women’s well-being.

International Affairs: Like Biden, Warren sees much of the issues in American manufacturing as a problem with international trade agreements. Although there isn’t much from her campaign on her intention for this facet of her policy.

Education: Harris outlines a plan to provide the average public-school teacher a $13,500 raise. Yet this does not address the issue with Detroit Public School’s neglected infrastructure and history of mismanaged funding.

Environmental Protection: Harris can count herself among the ranks of proponents for the Green New Deal. Although her campaign doesn’t work to marry the issue with economic prosperity like other candidates who are leading the polls. Social Programs: What might be the most pertinent to Detroiters would be her Rent Relief Act that would provide a tax credit to people spending more than 30% of their income on rent and utilities. And since Detroit’s rent can take up to half of the personal median income, this issue seems to play an important role in a continuously changing Detroit.

International Affairs: Her most important contribution to this is in strengthening relationships with the highly industrialized allies, rather than renegotiate trade with them. This could be a make or break aspect of her policy.

Education: Mayor Buttigieg is the largest supporter of bolstering Title I, a federal program that provides financial assistance to districts that serve a predominately low-income student population. However, critics say that without new rules about accountability and transparency, the funding increase would be turned into wasteful spending. Economic Opportunity: The three issues he’s chosen to focus on are Bolstered Collective Bargaining freedoms, a $15 minimum wage and more affordable housing options.

Environmental Protection: After passing a Green New Deal and marrying it with the economy, Buttigieg wants to work closely with communities that would help determine the best environmental practices on a case-by-case basis.

Social Programs: His campaign has taken special interest in reducing the difficult aspects of crime that are often overlooked. This means banning the box, reducing the criminalization of poverty, and ending mandatory minimum sentences for certain offenses.

International Affairs: Being an Afghanistan War Veteran, this credential provides him with a unique authority among voters working toward closing the gap in services provided through the VA Hospital in Detroit.