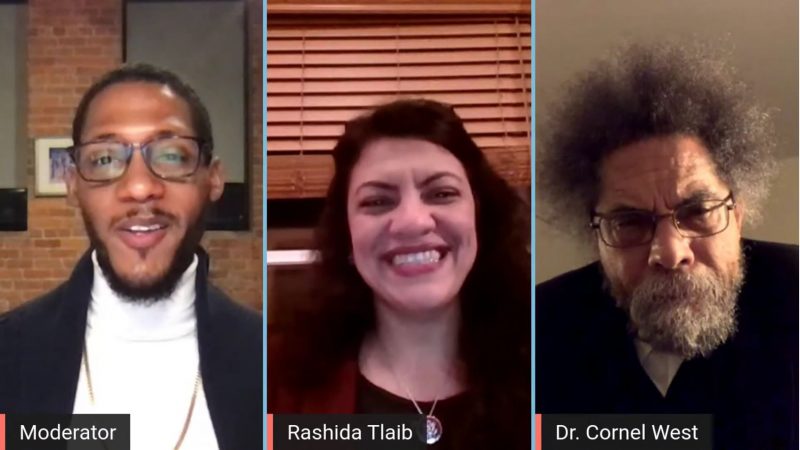 Using #BlackHomesMatter as a falling cry, the talk was hosted by the Coalition for Property Tax Justice, Rep. Rashida Tlaib, Cornel West, and Rev. William Barber II urged action on the issue that is ever-present in cities across the country. The night, which saw more than 600 in online attendance, was complemented with a thorough thread of data on Twitter.

Thread of links to studies/articles used in the #BlackHomesMatter presentation: 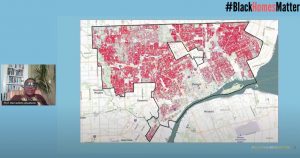 After brief introductions, the first speaker of the night was Bernadette Atuahene, a professor at Chicago-Kent College of Law and an expert on property tax overassessment in Detroit, who also works as the leader of the Coalition for Property Tax Justice.

“In Detroit, over a hundred thousand families have lost their homes. Since the Great Recession, one in three homes has been taken by the government for property tax foreclosure. We on the ground are calling this a hurricane without water because of the extensive amount of displacement and dispossession,” stated Atuahene while showing a map of the city of Detroit. “I want you to see what that looks like. When I say one in three homes in Detroit have been taken through property tax foreclosure, think of these red dots as homes. As you can see here, there is no neighborhood in Detroit that has not been touched by this property tax crisis. So the real question is, what in the world is going on in Detroit?”

While Detroit property taxes are already high, this was not the focus of Atuahene’s presentation. Instead, she wanted to focus on the assessment process in Detroit.

Now, the Michigan State Constitution supporting case law is quite clear; no property can be assessed at more than 50 percent of its market value. What does that mean? Well, if the market value of your house is $100,000, the local authorities cannot assess your home for more than $50,000. And, if they assess it more than $50,000, then that is illegal, Atuahene stated while discussing how property tax is assessed.

Busting out her data, Atuahene brought up the fact that between 2009 and 2015, 55-85 percent of all property addressed by the City of Detroit violated her aforementioned point in the Michigan State Constitution. Of the homes being passed, 95 percent or more of the lowest values homes are being illegally assessed, while only 16 percent of the highest valued homes were being overly assed. Thus, in a city already facing too many economic hurdles, Detroiters in many cases are paying an illegally high amount of property taxes.

This is where the call for action comes in, as Atuahene, Tliab, West, Rev. Barber and the dozen or more organizations involved with Coalition for Property Tax Justice are demanding action from state and local leaders.

The colation put out three demands aimed at Mayor Duggan — which asks that he create a fund to compensate Detroit homeowners who were overcharged — Wayne County Treasurer Eric Sabree — starting that he must stop foreclosures on owner-occupied homes until the crisis is addressed — and Gretchen Whitmer — who, while already refusing, has been asked to have the State Tax Commission investigate the process of over assumption.

Joining late due to the ongoing impeachment process in Washington, Tliab joined the call sharing, “As you all know, Michigan lost more black homeownership than any other state in the country, 40 percent loss in black homeownership. We have also seen more and more of our neighbors — generations in their homes — being pushed out.”

I think as we see the uprising in our country for Black Lives Matter, that it has to be attached to real policy change that uplifts our black neighbors and that includes having true access to homeownership, to housing and it should be a right and we should be very intentional to in the policy-making that possible, Tlaib added.

Reacting to the data presented, Rev. William Barber II shared, “I want to go back a little bit, people need to understand, this is injustice on top of injustice. Detroit is that city, the motor city; we know how when Ford — for instance, with the River Rouge Plant — had up to 90,000 workers, yet even inside that economic engine, they had a wage structure that kept black and white workers separated in the plant. So back people suffered in that way, they did the same work for less.”

“Wherever there is systemic racism, there are always two things, theft, and death. Whether it be the racism of slavery or Jim Crow, there is theft and death,” he later added.

Tying the matter to the overall systemic racism present throughout US history, Rev. Barber II called out the banks and local government, urging those listening to react to the crisis plaguing Detroit the same way they would to murder by police. Speaking after Rev. Barber II, West echoed his sentiments, calling out the lack of accountability and lack of investigation around the matter.

“I just hope we can cast limelight here in Detroit, in Chicago, in Atlanta, all around the country, this limelight of this underside of the society in which the greed is running amok, the corruption running amok and then the ways in which our government is facilitating this.” Shared West, while hoping for positive limelight to the situation. “I think sister Rashida put it so well when she said it was not about demonizing any politician, but it is a matter of criticizing any politician whose not stepping forward to come to terms and elevate this kind of suffering.”

The night then concluded with a few more testimonials from Detroit residents describing their experience and a perfromce from Detroit’s own Clark Sisters. The complete talk on unjust property tax assessment can be watched on Facebook or YouTube, while the petition that will be presented to Governor Whitmer can be found here.

Detroit Home Décor This May: Another Reason & Season to Shop Small

Grocery Shopping in Detroit – Pull Out Your Shopping List