Before Amazon Moves in, Check Out the History of Detroit’s Michigan State Fairgrounds Site

Soon to be an Amazon Fulfillment Center, the Plot of Land on 8 Mile Has a History Dating Back to 1904 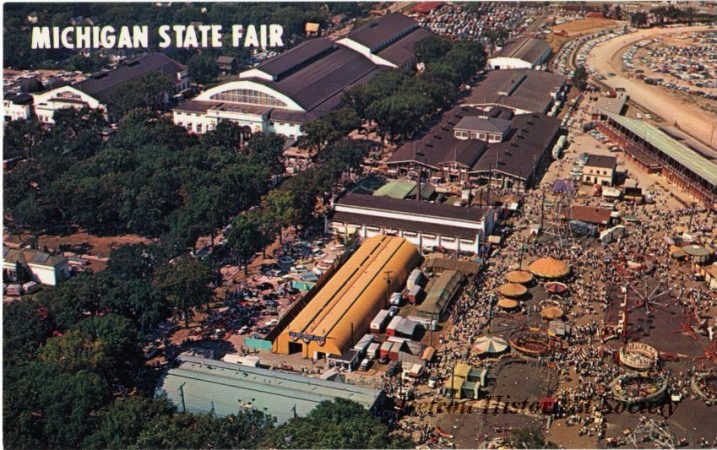 This past August, Amazon announced it would be working to construct a 3.8-million-square-foot distribution center on the former Michigan State Fairgrounds site in Detroit. With a history of hosting the Michigan State Fair for over a hundred years, the back story behind the long-unused fairgrounds involves the world’s largest stove and a former president’s home.

The history of the Michigan State Fair dates back to the first few years after Michigan was granted its spot as a state in the Union in the mid-1800s. The state had originally attempted to hold a fair in the late 1830s but to no avail. Instead, the first official fair was held in 1849, which is sometimes dubbed as the oldest state fair in the country, a claim which will not be the examining factor of this story since the State of New York has a pretty solid claim on the title of the oldest state fair held in 1841.

Instead, let’s take a brief look at the very obscure history behind the 8-mile location.

THE FOUNDING OF THE FAIRGROUNDS

1904 was the year of the founding of a permanent fairgrounds for the festivities. Joseph L. Hudson, a man whose name seems to be just about everywhere in Detroit’s history, worked with three of his associates to find a permanent home for Michigan’s State Fair, forming the State Fair Land Company, the group acquired approximately 135 acres between 7½ and 8 Mile roads just east of the world-famous Woodward Avenue.

A year later, with no actual interest in managing the fairgrounds or the fair which it hosts, Hudson and the gang sold the land to the Michigan State Agricultural Society for the whopping sum of a single dollar, which in today’s standards equals out to about $29. From there, the society expanded the fairgrounds over the year, selling and occasionally buying land until the site came to its present size of 164 acres.

While today the location is known as anything but rural, this wasn’t the case in the early 1900s and the site of the fairgrounds was surrounded by farmland at the time. However, as Detroit continued to industrialize, the city had expanded to where the fairgrounds and beyond, allowing for the fair to play on its strong agricultural roots.

Speaking about the old fairgrounds, Joel Stone, a Senior Curator at the Detroit Historical Society, describes the state fairgrounds at the time as a place where many Detroiters working long hours in factories could go to and experience the rural atmosphere they had grown up with.

“The city grew and grew and grew so that by 1927, it had grown out to the State Fairgrounds and beyond,” Stone stated. “All of the suburbs were then underway and it was really a place for the people who were now spending their lives six days a week in an auto factory. It was an opportunity for them to get back to where they came from.”

Even while surrounded by the now expanding city, the State Fairgrounds offered many in the city the opportunity to experience farm animals and other aspects of rural life. Two of the more famous buildings on the site that remain to this day include the Agricultural Building and the Dairy Cattle Building, two attractions that were essentially massive farming buildings. 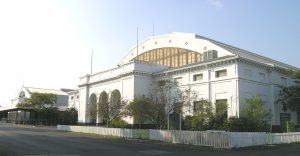 The unique attraction and architectural wonder still standing at the site is the Riding Coliseum, which, while not being used for fairground festivities, hosted big-time stars such as Louis Armstrong, Marvin Gaye, and Al Green throughout its lifetime. Constructed in 1922, the coliseum was almost exclusively known as the site of the Shrine Circus whenever it came to town, seating over 5000 people in its deep blue colored stands.

While not hosting singers, the circus, or fairground festivities, the building was used for various sporting endeavors and cameos. Between 1999–2008, the Wayne State University Warriors ice hockey team called the coliseum home and three Extreme Championship Wrestling tournaments were held in the building. The coliseum also made its only big-screen appearance in 2008, when the exterior was used for the 2008 Will Ferrel movie Semi-Pro.

Still standing in 2020, nearly a hundred years after construction, it’s unclear where the coliseum will fall into Amazon’s plan for the site.

Another building that actually predates the fairgrounds was one of the homes owned and lived-in periodically by former President Ulysses S Grant. Originally built near Layfeyete Park in the former Blackbottom neighborhood, the home was moved to the fairgrounds as part of a preservation effort in the 1930s.

According to the conversation with Detroit Historical, the idea seemed to have been to move the home somewhere people would see it. As luck would have it, the fairgrounds were a good fit, and Grant’s home remained on the site until 2019 when it was then moved to Eastern Market for restoration. 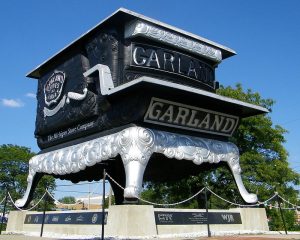 THE WORLDS LARGEST STOVE BEFORE ITS DESTRUCTION. PHOTO FROM MAIA C ON FLICKR.

Perhaps the most famous landmark outside of the coliseum, however, was the massive stove that captivated onlookers well into the final years of using the fairground. Dubbed as the “Worlds Largest Stove,” the massive wooden advertisement was actually built in 1893 for the Chicago World’s Fair by the Michigan Stove Company.

“Detroit was the stove capital of the world. Between the Art Stove Company and Peninsula in Michigan, there were two or three others,” shared Joel Stone when asked about the stove. “We [Michigan] had a bunch of stove companies and so this was the Michigan stove company’s way of advertising their product.”

After its advertising stint, the wood stove was displayed at the Michigan Stove Company headquarters in downtown Detroit, before moving to the Michigan State Fairgrounds 1970s. By the 70s, however, the stove was in bad shape, with much of its wood deteriorating. In the 1990s, the marvel was restored by the end of the decade, featuring metal legs and a newly painted exterior.

When the Michigan State Fair officially came to an end in 2009, talk began of moving the stove to another museum, but then disaster struck. In 2011, a slow burn occurred after the stove was struck by lightning, leaving nothing more than charred bits and pieces as the sole reminder of where the world’s largest stove once stood.

DECLINE AND FUTURE USE

Massive stoves aside, the Detroit fairgrounds location had a long run, with attendance reaching its peak in 1966, as more than 1.2 million visitors came to the site. By 2009, only 217,000 people visited what would be the final Michigan State Fair. After former Michigan Governor Jennifer Granholm vetoed legislation to provide funding to the fair in 2009, the fairgrounds fate was sealed.

The Michigan State Fair came to an end in 2009 and since then, the location was home to a transit center, as well as a center for COVID-19 testing. While the site remained vacant, talk of commuter rail and other development projects failed to materialize, ultimately paving the way for Amazon’s arrival.

What comes next for the fairgrounds is still up in the air, given the ongoing pandemic. Will Amazon keep the coliseum and existing buildings, or will they join the World’s Largest Stove? Stay tuned for more as Amazon begins development on the site.