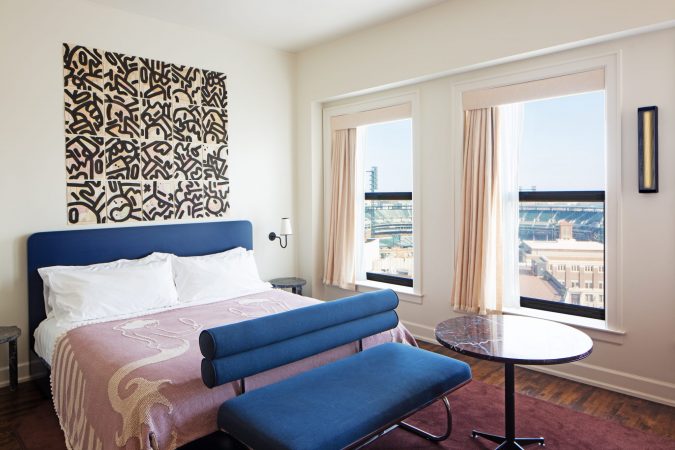 There is something truly enchanting about waking up in a hotel. The comfort of crisp sheets, a plush comforter, and the anticipation of something new is a feeling entirely its own. Director of Brand Experience for ASH Hotels, Hugo Vicente speaks to this in his own experience, “I love hotels, and the poetry of the fact that life unfolds in hotels,” he continues by saying they are the only other place where we sleep, eat, bathe, celebrate, and mourn other than our own homes.

During the pandemic, however, this poeticism and interconnectedness of hotels have been greatly diminished. Social distancing guidelines have created a six-foot boundary between each of us. In our own ways, we have each experienced loneliness and feelings of being detached and disconnected from society, friends, and family. But this separation did not deter Vicente from exploring new ways to utilize the Siren Hotel in downtown Detroit to aid in the incorporation of something beautiful through these hard times.

Vicente has always loved the idea of artists being featured as residents of the hotel and creating through their artistic medium during their stay. He connected with Sarah Ayers, a local curator and gallerist herself who has been a leading force curating and connecting talent with this residency program. “I’ve always wanted to do an art residency because I like the idea of people coming in and gathering and just like sitting there to explore new ideas,” he says.

During a normal economy, the idea of offering space to resident artists wasn’t a viable option, but as the pandemic put the world on its head, the idea became doable with a hands-free hotel experience.

The first residency began in April 2020, and since then numerous artists have stayed at the Siren Hotel and utilized the space as a safe haven to work and create. This partnership came to the aid of local artists at the perfect time as studios, co-working spaces, and campuses were closed because of the pandemic. In return for the experience, the Siren asked to be named as the hosts.

Throughout the ups, downs, sideways, and curly-cues of 2020 each resident artist at the hotel seemed to integrate themselves into the city, granting their art a poignancy of a city caught in a polarizing time.

The in residence during the presidential election, Sara Ridky, created artwork depicting the importance of voting and also talked about the pride we should have in our ability to vote. During the BLM protests last summer, another artist, Rachel Elise Thomas, captured photos of her time downtown as the protests became a daily march for Detroiters.

Most recently, artist Mike Han brought to attention through his art the AAPI hate crime in Atlanta. Before the shootings 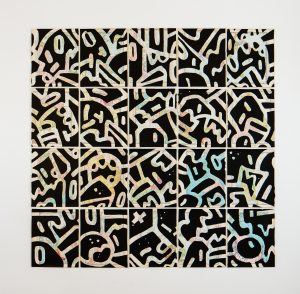 happened, Han had a different idea of what his residency would hold, but after, Han switched his plan to accommodate his personal convictions and inclinations toward supporting the hurting AAPI community.

Han’s piece Disparate contains individual maps of numerous states, and each is painted over with thick black lines. Together, the piece looks whole, but when each piece is segregated apart from its siblings, each piece is entirely its own. In an Instagram video on his page explaining his piece, Han says, “It helps illustrate that idea that we are all unique, we are all different, yet we are absolutely connected, it’s just not apparent. It’s not easy to see.”

Vicente himself speaks to how each artist in residence was able to aid in Detroit’s understanding of this crazy year,

For you to really grasp the condition of a society or a city or a culture, you gotta look at your artists, he says, Because artists dedicate their lives to really put their feelings on the canvas or in a piece of music or whatever is their creative output.

It seems each artist was able to depict their own digestion of Detroit and the events of this year through their own eyes. Even as six-foot boundaries, masks, and grounded flights kept us all very far away from each other, Detroit’s artists, and those the Siren Hotel hosted, utilized their surrounding world to show honestly, and artfully, this city and the importance connection can have on the individual and on a community as a whole.

“It’s a weird thing to say,” says Vicente about the resident artists program, “but it’s a good thing that came out of this year.”