Detroit’s Modernism Set it Apart from Other Cities 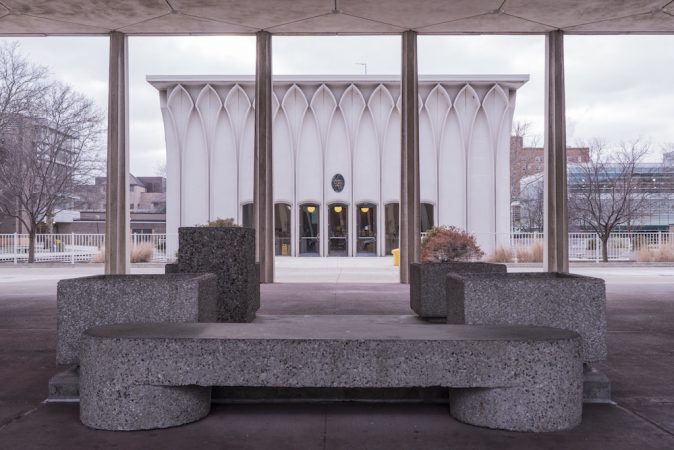 In the Two Decades that Followed World War II, Detroit’s Economy Thrived and It’s Buildings Showed It That’s reflected in its architecture, and the metro area’s money and success attracted modernist heavyweights like Eero Saarinen, Mies van der Rohe, and Minoru Yamasaki. While One Woodward, Lafayette Park, and the General Motors Technical Center are Detroit’s best known modernist wonders, the city is full of smaller structures worth a visit.

A good place to start looking is Midtown’s hospital campus between John R. and Beaubian Streets, which is filled with a range of fascinating modernist buildings.

It’s there that Detroit’s modernist master, William Kessler, set out in a new direction for a hospital with Detroit Receiving Hospital. Completed in 1979, the structure is composed of highly reflective aluminum blocks of varying sizes that are stacked in a deliberate manner. Rows of narrow, dark-glass windows dash across the cubes, and red, enamel slabs and yellow pedestrian tubes at the base provide the only accents. The design could be read as symbolic of advances in modern medicine, and it was described by architecture critic Eric Hill as possessing the “sleekness and finish of a jet fighter.” It received an American Institute of Architecture award for its design, and is also noted for its 1,200-piece art collection.

Like Detroit Receiving, Kessler designed a set of blocks that compose a modernist pyramid holding the Coleman Young Recreation Center. He built it in 1981 on a little-used road in Detroit’s struggling east side, near the van de Rohe-designed Lafayette Park. The large, stacked cubes peak at five stories and slope to a single block at the south and west edges. At first blush, there appears to be little reason to the geometrical mass, but a closer look and tour of the interior reveals its genius. The cubes serve a function as the gyms fit neatly into the spaces. The Coleman Young’s swimmers and boxers work out in pools and rings beneath a rounded, frosted glass wall that’s one of the few deviations from the building’s right angles.

Detroit’s university campuses are also troves of modernist architecture not frequently viewed by non-students. Exhibit A is the Center for Creative Studies’ Kresge Ford Building, which opened in 1975. Detroit’s only Metabolist structure – a style marked by buildings that don’t have a beginning or end – the Kresge Ford is arguably Kessler’s tour de force. Concrete tubes connect to nodes that link with more tubes and slabs, resulting in a system of rectangular concrete frames. Those hold 32-foot by 32- foot “modules” that serve as design studios. Should CCS expand the building, it could, in theory, easily install and stack more cells in any direction. Concrete turrets on the building’s edges hold stairwells, and reviews often mention the Jetsons, Tinker Toys, or Legos. However, that shouldn’t lighten what Jennings achieved – it’s an original, functional, and smart design.

The two-story McGregor, constructed mostly in marble, gunite, concrete, and glass, sits on a platform several feet above street level, as is common for new formalist structures. A glass atrium bisects the building’s two identical halves. Each east and west façade presents a series of tree-like columns holding protruding, gunite triangles at the roofline and second floor level. That not only creates an interesting, repetitive pattern – one that Yamasaki would regularly utilize going forward – but also provides function in shielding the interior from direct sunlight.Several blocks to the west, Minuro Yamasaki made his mark on Wayne State University’s campus with the McGregor Conference Center, Helen L. DeRoy Auditorium, and the Prentis Building. Yamasaki is most famous for the World Trade Center, and locally for the One Woodward tower at Woodward and Jefferson.

But the McGregor Memorial Conference Center on WSU’s campus is notable for its design and because it marked a pivot in Yamasaki’s style and philosophy. It went up soon after he traveled around the world to study Japanese temples, Renaissance architecture in Italy, and Muslim structures like the Taj Mahal in India. He subsequently ditched the soulless “glass box” designs of the International Style architecture for the “dignified and elegant” style of the new formalism school, which he helped pioneer. The latter mixed eastern and western ideas, new takes on classical precedents, and “made minimalism cool,” as Mark Harvey, state archivist at the Archives of Michigan, put it.

Inside, light spilling through the pyramid skylights and diamond-pattern screen fill the two-story, glass atrium with light. Marble-clad columns holding the same protruding triangles as the exterior flank the lobby, and the room possesses what is described as a “medieval cathedral” motif that delivers serenity and purpose.

The DeRoy, a small, square two-story auditorium, sits near Cass Avenue on the campus’s east side. A series of cast concrete panels that form the outline of Gothic arches stretch in a repetitive series across the façade’s length. Each arch starts at the windowless building’s base and runs nearly the length of the concrete wall. Yamasaki surrounded the Helen L. DeRoy Auditorium by a reflecting pool – the building is only accessible via two bridges. Inside, the main floor’s auditorium holds 400 plastic cap seats, and the walls are adorned with the same modernist Gothic tracery found on the exterior.

Yamasaki completed the building at the same time as the neighboring Prentis, and the two were designed to relate to each other spatially and architecturally. The Prentis is a geometrical montage with Italian travertine marble and a network of interconnecting hexagons, octagons, and rectangles. Perhaps the best view of the DeRoy is approaching it straight on from Cass and standing among the hexagonal pillars in the broad “passage” underneath the box-y, two-story Prentis.