Located in a 20,000 sq foot facility quietly tucked away on Detroit’s Eastside, the Empowerment Plan is an organization working against homelessness in a completely different way from what shelters and support organizations are supposed to do. Operating in a time where homelessness is on the rise, instead of solely providing food or shelter for those in need, the organization is working to tackle the issue of homelessness at its core by helping people get on their feet and on to a productive career.

The organization came to be following founder Veronika Scott’s studies at the College of Creative Studies. Studying industrial fashion, Scott put in research at the Neighborhood Services Organization, a shelter in Midtown Detroit, where she became close with the residents who frequented the shelter.

It was through this experience that she would come up with an idea that would eventually lead to the Empowerment Plan’s “EMPWR coat,” a durable piece of outerwear designed to help those with no shelter during cold nights. Functioning as a multi-use parka, the coat can be folded up and carried on a shoulder when not in use, or be unfolded and used as a sleeping bag.

It’s time to #SpreadTheWarmth! Today we are launching our 2019 holiday campaign and need your help to reach our goal. Each $125 donation sponsors a coat for someone in need, but a gift of any size goes a long way in spreading the warmth to cities near and far. Click the link in our bio to donate today! Thank you for your support! #EMPWRdetroit #detroit #detroitnonprofit #nonprofitlife #seamstresslife #giveback  #socialchange #community #endhomelessness #endpoverty #womensempowerment #empowerment #homelessawareness

Scott estimated that during her time working with the Neighborhood Services Organization, there were approximately 20,000 people without a home in Detroit and only three operational shelters. Inspired to address this problem, she began to brainstorm on a way to make things a little easier for those unable to make it to a shelter at night.

“Really the coat came of that experience, it came out of spending time with those individuals, I designed it with them, not just for them, they were a huge part of the design process,” said Scott. “It was about a couple things, it was about giving somebody the pride, dignity, and respect that they deserve, at the same time as giving them something that can address a purely physical need, which is not necessarily being able to get into a shelter at night.” 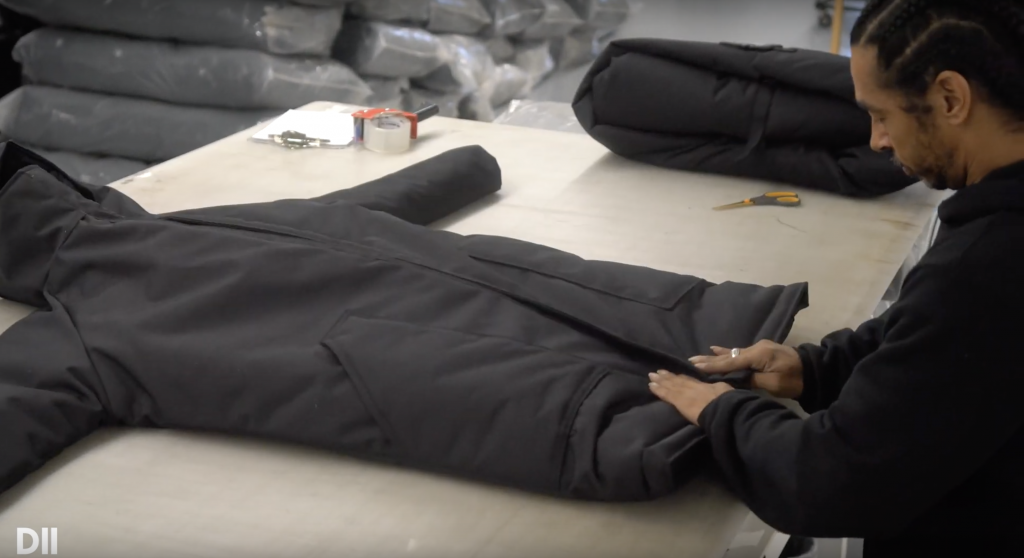 The coat is made from upcycled material provided by General Motors and Patagonia and is designed to help those wearing it withstand the dangerous effects of exposure to the elements, an aspect that is especially useful during winter months in frigid Midwestern cities such as Detroit.

Unavailable for direct purchase, the coats are only given to those in need after a gift is made typically through a donation. But the coat itself is just the surface of the support offered by the Empowerment Plan and is not a singular solution.

“On its own, the coat is really a bandaid for a systemic issue. What really has an impact is hiring people that need it in the first place,” shared Scott. “That’s where the Empowerment Plan shifted from being about this jacket and design project into something much bigger, which is about looking at what’s happening in the cycle of homelessness and poverty.”

GENERATIONAL POVERTY AND A PATH TO EMPLOYMENT

Knowing this generational struggle first hand, Scott shared, “both of my parents struggled with homelessness my entire life, this is a much deeper thing for me than it is about the circumstances of being in Detroit when the economy collapses. Growing up in that situation, you’re treated as if you’re bound to have the exact same life.”

Combatting this mindset through a network of support is key for the Empowerment Plan. With 100 percent of its employees being homeless individuals, the organization partners with local shelters in Detroit to find people seeking work. While employed, the program offers a range of services to the workers who make the EMPWR coat, including childcare, secondary education opportunities, domestic violence support, driver education, and leadership training.

According to the Empowerment Plan website, employees devote about 60% of a paid 40-hour workweek to coat production, while the remaining 40% is time spent on programming and supportive services. By centralizing these support networks under one roof, the Empowerment Plan negates the back and forth struggle of running around a city to acquire the resources for a family to survive.

Touching on work she did while volunteering in Chicago, Scott mentioned that one woman she came into contact had to visit over 70 different support organizations until she was finally able to work her way out of poverty. The Empowerment Plan aims to make this struggle a thing of the past.

CREATING A COMMUNITY OF SUPPORT

Of those who work at the Empowerment Plan, many are young single mothers, a demographic that, according to the State of Michigan, made up about 82% of all homeless families in Michigan during 2018. One worker in that demographic is a single mother of six named Jessica who saw her life improve substantially after getting a job with the organization and finding a support network. 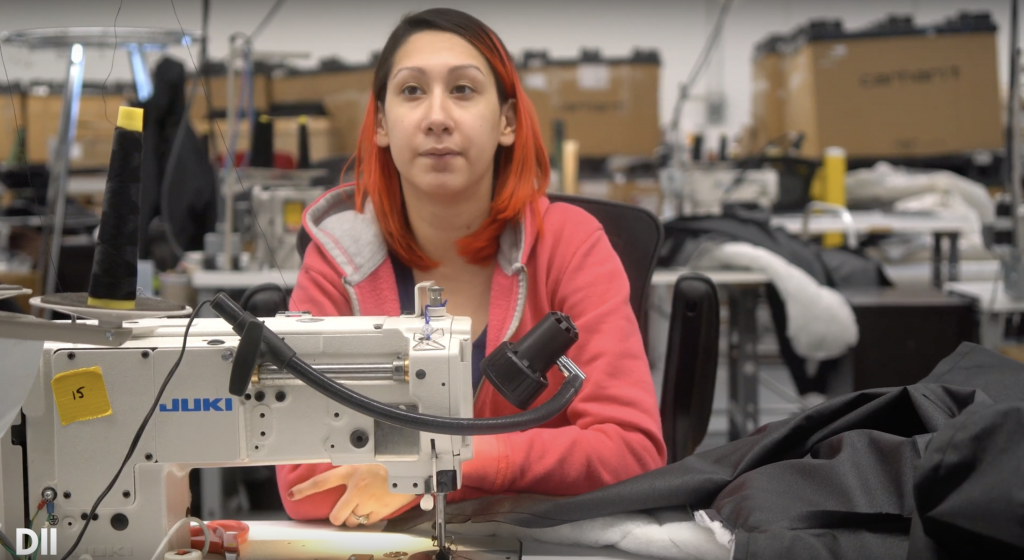 Moving states, Jessica found herself on hard times after a period of joblessness and considers the community support she found within The Empowerment Plan a blessing.

“I’ve been at the Empowerment Plan for about four years, I was at COTS [Coalition On Temporary Shelter] Homeless Shelter for about 3 months when the Empowerment Plan came in to do a job fair. It was very extensive, you definitely have to prove your worth, I went through multiple interviewers, and on the third, I walked out with a job,” she shared. “I had moved states, so it was a fresh start for me, and coming here, I wasn’t expecting to be homeless. Getting the job after giving birth to my baby, was all my blessings coming through.”

Through joining the Empowerment Plan, Jessica was able to find stability for herself and her children with people who understand her struggle. According to Scott, a lack of a community, and not having others around you who understand your situation are two other aspects contributing to generational poverty. The lack of a community and the fear of alienating those they have grown close to in the shelters in some cases act as a barrier for some hoping to escape poverty.

“That’s actually one of the top reasons people stay in poverty, they are afraid to alienate friends and family. A big part of what we’re trying to do is create that family network of people you can rely on, who are part of your community now.”

Jessica described the conditions as almost akin to be a family, a group of people who all understand the problems each worker is facing.

“We are definitely like a sisterhood,” she shared. “What brings us together is, there’s no judgment, we’ve all been through similar experiences, so it’s kind of comforting to know my neigh or knows what it’s like to be homeless. We’re all here to accomplish one thing, and that’s to provide for our family.”

While looking to find support for her family, Jessica found some larger, a community of people who understood her struggle, and who look at her as just another person, not as a homeless individual. When speaking with Scott, she touched on this idea, that homelessness is not a defining characteristic, and that overlooking that aspect is one of the first ways we can address the matter of homelessness in our community.

“Homelessness is not a defining characteristic, it doesn’t tell you anything about a person except that they’re displaced. I think changing the way people see poverty and homelessness as not a permanent state of being, not something that defines someone for their entire life, but as something they can move through and beyond, I think that’s really important,” said Scott.

She continued by sharing, “It can be a mother that has a Ph.D. that winds up in a shelter because they’re escaping domestic violence, it can be all sorts of people, and frankly, none of us are as far away from us as we think we are.”

With February 17th being Random Act of Kindness Day, there is no better time to sponsor or request a coat for someone in need. If you’re looking to do so can find more information about the EMPWR coat on the Empowerment Plan website.