Despite a Year of COVID-19, Two of Detroit’s High-Profile Development Projects Move Forward as Planned

With Some Minor Setbacks in 2020, Both the Hudson’s Site and Gordie Howe Bridge Have Continued Development Through Much of the Pandemic 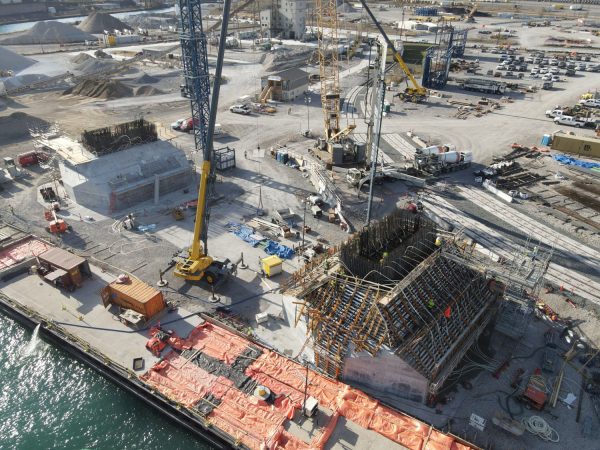 Before COVID-19 and the lockdowns that followed, Detroit had a slew of high-profile development projects well underway, from the long-awaited Hudson’s Site to the historic Michigan Central Station redevelopment and the Gordie Howe Bridge being built just down the road. With many locked down, at home, and away from Detroit for most of the year, some may be wondering how these projects are faring and whether the pandemic has impacted the completion timeframe.

Yet, despite the pandemic, for some projects, construction has continued in a safe and usual manner. The Hudson’s Site has finally emerged from the ground — after months of digging through the mess of metal and foundation left from its predecessor — while the new bridge between Windsor and Detroit begins to take shape on both sides of the Detroit River.

Let’s take a moment to catch up on both the Hudson’s Site and the Gordie Howe Bridge, looking at the current stage of development and whether any changes have come to two of Detroit’s most high-profile projects.

#ConstructionUpdate: Progress continues on the #GordieHoweBridge project with the first concrete pour for the Energy & Maintenance Building – one of the many structures to be built at the Canadian 🇨🇦 Port of Entry. #Windsor #YQG pic.twitter.com/UeVZyIJpAD

Being an international development project between the United States and Canada, the Gordie Howe Bridge construction team had to work with varying pandemic plans put in place by the Province of Ontario and the State of Michigan when the pandemic began. But, despite this, the Windsor–Detroit Bridge Authority [WDBA] shared the process was able to continue relatively normally.

While whether or not the pandemic delayed any of the construction timeframes is a question yet to be known, both the WDBA and private-sector partner, Bridging North America, put parameters in place to protect workers constructing the project. Working throughout 2020, 2021 is where phase one of the project will begin to wrap up.

Current activities on the U.S. side of the project include major earthworks such as excavation, placement of wick drains and surcharge fill, utility relocation and the construction of temporary stormwater management facilities to help manage site water run-off, Mark Butler, Director Communications for the WDBA, shared. Phase One of the Michigan Interchange work began in fall 2019 and is anticipated to be complete in mid-2021.

“Tower foundation and footing work on the Canadian and U.S. bridge sites is well underway. The bridge foundations have been completed and work on the bridge towers has now begun. Structures will begin to be visible on both sites later this year,” he added.

The six-lane, cable-stayed bridge is expected to have a length of 1.5 miles (2.5 kilometers) once completed and will be among the top five longest bridges in North America. It’s expected to connect with other projects such as the Joe Louis Greenway, pedestrian bridges, and ports in both the U.S. and Canada.

As of yet, the bridge is still scheduled for completion in 2024.

WHERE THINGS STAND WITH THE HUDSON SITE

Two cranes were delivered to the Hudson Tower site today, marking an exciting construction milestone. The assembly of the cranes allows for vertical construction to begin, entering the project into the next phase of development. pic.twitter.com/Q4RHFxtoJW

Remaining a hole in the ground — due to a mess of metal and old foundation left from the original J.L. Hudson’s department store — since work began three years ago, the Hudson’s Site project has finally moved above ground and work is well underway on the project. With cranes delivered to the site in July, a visible structure can now be seen from the surrounding area on Woodward Ave.

Having already seen 115,297 total hours worked on the site, the pandemic’s onset in March did see some delays, but the project was still able to move forward and could see the completion of the front portion of the structure by the end of 2023 — while the tower is expected to be completed in 2024.

In terms of changes, the pandemic brought none that were not known before. First touted as Detroit’s future tallest structure, the currently planned height for the building remains 680 ft tall, 47 ft shorter than GM’s Renaissance Center, putting the building at Detroit and Michigan’s second tallest building. Yet, the structure is still planned to be massive as far as square footage goes, with 1.5 million sq ft divided between office, a hotel, residential, events, outdoor spaces, and food/retail.

The 2-acre site will also feature over 750 underground parking spaces once completed. When the structure is finished, it’s expected — along with Michigan Central Station, the redevelopment of the former State Fairgrounds, and other projects — to help Detroit’seconomy recover faster than other cities in the country.