An Update on the Joe Louis Greenway Project

Nearing the Start of Construction on Phase 1 of the Project, Second Community Meeting Helps Answer Questions 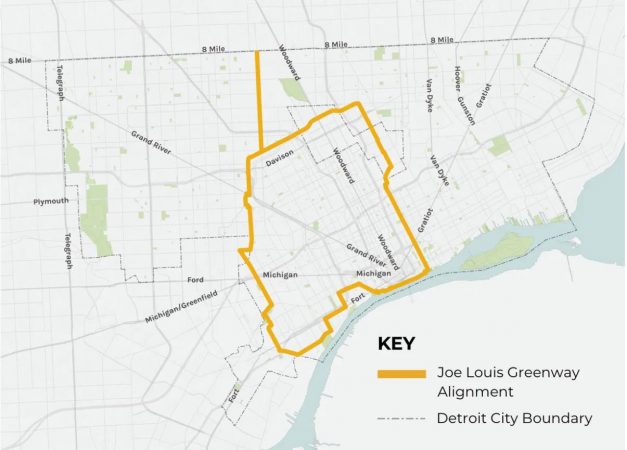 The second community meeting for Detroit’s Joe Louis Greenway development took place in an online Zoom meeting on Thursday, October 29. The meeting allowed residents of the surrounding area to address any concerns or questions they may have and learn more about what we can see from the project heading into the next few months.

Phase 1 of development, slated to begin construction once the weather warms up, consists of a 2.8-mile stretch from Warren to Fullerton on Detroit’s west side. Moderated and ran by members of the development team, talk of the night included construction and environmental aspects, as well as survey questions to gauge community sentiments on matters such as murals and light fixtures.

Being that the site of the greenway used to operate as train tracks, there are concerns about the contamination of land and the development team presented some solutions that would follow the soon to be completed environmental assessment. One included removing contaminated soil from the site while placing new soil on top, thus allowing for an even construction.

The team is also debating whether to utilize old cement and other materials cleared away from the land. Such a move would save on cost, but the team mentioned that they would want to ensure there is no contamination before considering doing this.

Another factor that makes the greenway unique is that it will incorporate meadows to create a more natural look while also promoting wildlife growth along the trail. The team outlined that they will be removing any trees on the site to replace them with native species that would have been in the region before industrial development.

The creation of meadows will also play into stormwater management, a major factor of the project.

The greenway will also work to implement art along the walls, signage and greenway buildings, a process that will include Detroit artists. They also hope to gather stories of the surrounding neighborhoods, as well as the railway, which they hope to gather using their website and or email.

Artists were also strongly encouraged to reach out to the development team at joelouisgreenway@detroitmi.gov if they are interested in creating art for the greenway.

The recorded meeting can be watched here, which includes further details, as well as the results of community survey questions. Be sure to subscribe to our newsletter for further updates on the Joe Louis Greenway.