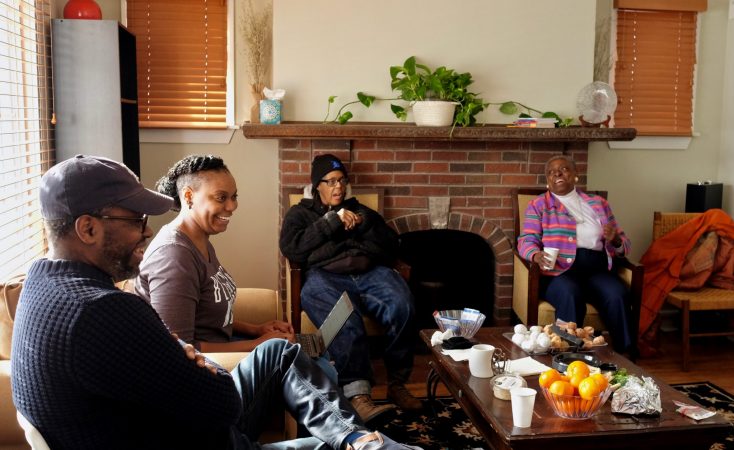 Due to Detroit’s past, empty and abandoned buildings are ubiquitous with the city. Past downtown, it is difficult to drive anywhere in Detroit and not see boarded-up windows or empty lots where houses and buildings once stood. This hauntingly beautiful atmosphere can provide uneasiness for some, but for others, unused space in neighborhoods provide unique opportunities to join communities and fill physical space as well as needs sought by the area.

Here are four individual entities that serve their neighborhoods and communities in unique ways in unique spaces. From abandoned houses to empty parks, and from personal visions to neighbors’ requests, these four spaces work hard to better Detroit person by person and block by block.

Community Push: From Midtown to Southwest

Community Push began with Derrick Dykas and a group of other skateboarders in 2014. Their idea was to give the Detroit skating community a multifunctional recreational facility. When the city was going through bankruptcy a lot of parks were up for grabs. Because of this, Dykas was able to strike a deal with the city to use an empty lot located in Midtown. Over the next year, the Wig Skatepark was formed.

Dykas says he initially expected the Wig to be a place where him and his friends would come out, but soon they realized just how many people from out of the area, and even out of the state and country, came and used the outdoor space. “It put Detroit on the map in terms of skateboarding,” says Dykas. 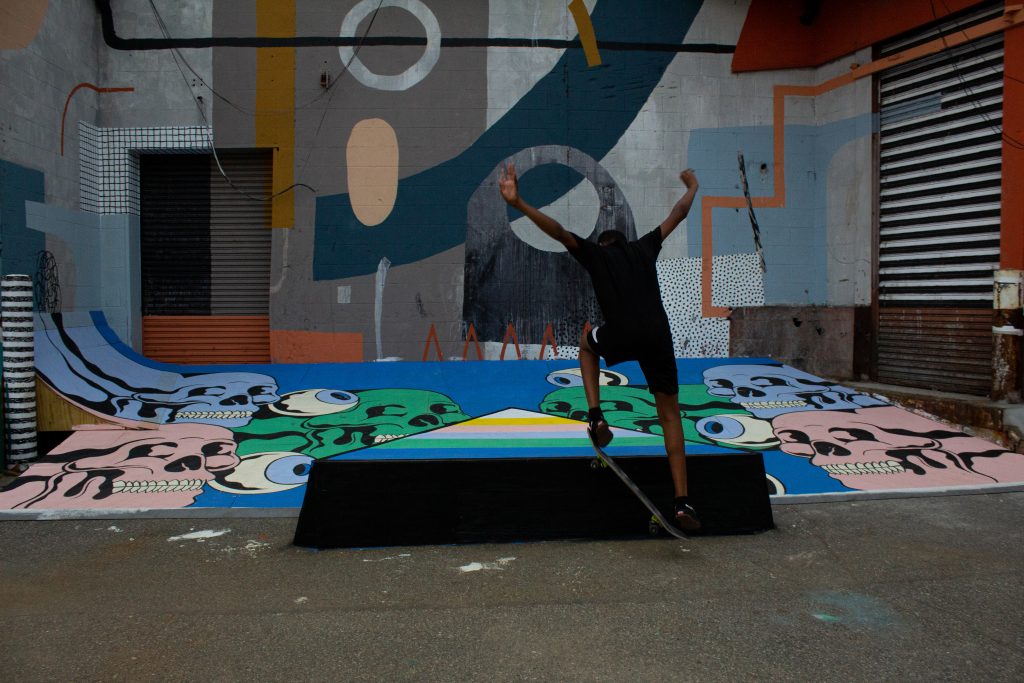 Community Push also had a building not far from the Wig where ramps were set up to provide an indoor space for local skaters. Recently, as more development has taken place in Midtown, the land Community Push used was sold and is now being readied for new renovation projects. Despite this, Dykas and his friends are looking at new ways to service their close-knit community.

Currently, Community Push is working on moving to a building in Southwest, near Riverside Skatepark. In this new space, Dykas and the others are working on setting up another indoor ramp. They also hope to offer programs for those interested in the sport, as well as open a skate shop for local Detroiters. “There’s no skateboard shop in the city,” Dykas says, “kids are stuck either ordering over mail or driving to the suburbs.”

Dykas hopes that there will one day be a skatepark in every neighborhood in Detroit. Riverside Skatepark is an amazing addition to Detroit, but it just isn’t a feasible location for those who live across the city. Until then, however, local skateboarders seem to make do with the parks scattered throughout the area, as well as makeshift ramps in other abandoned buildings throughout the city.

The Tuxedo Project: Detroit’s West Side

Local journalist Stephen Henderson started The Tuxedo Project when he returned to his childhood home on Tuxedo street in 2012. The house was nothing of how he remembered it, simply because it was stripped, gutted, and abandoned. In seeing this upsetting version of the house, he and some of his friends decided to restore it back into a functioning space.

The Project itself started on the basis of literacy. Reading and writing groups were formed, and many writers in the area were 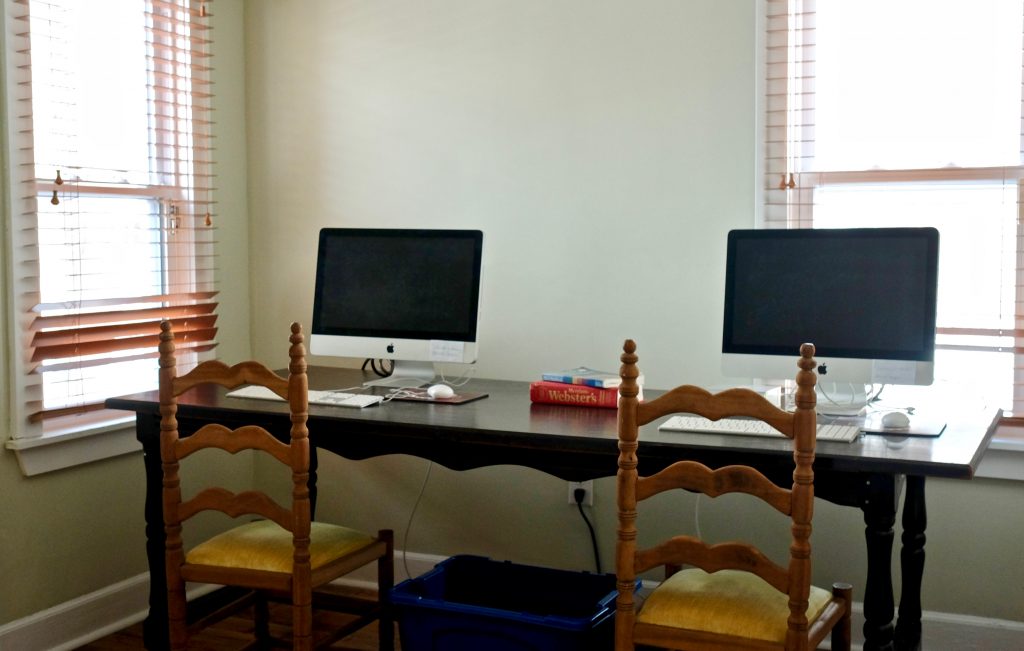 AVAILABLE COMPUTERS FOR USE AT TUXEDO PROJECT. PHOTO DANI DABNEY

able to come to the newly renovated house to enjoy classes and a quiet space to write. As time went on, however, it became clear that the community needed more than a place for writers.

Rose Gorman, the Director and Resident Fellow at The Tuxedo Project was able to clarify these needs into five pillars: identifying areas of improvement on education, food sustainability, housing security, economic opportunity, and the inclusion of the arts. “We’ve used this as a space to gather,” says Gorman, “but also as a space to provide structure and support and resources to the neighborhood and also to the artists.”

Gorman describes The Tuxedo Project as a neighborhood liaison. Along with free wifi and computers for individual use, The Tuxedo Project works with food distribution services such as Forgotten Harvest and provides grassroots services for the neighbors. These include lightbulbs for front porches to brighten the dark street and salt for sidewalks in the winter.

“What we do here that’s slightly different is our work has kind of started to center on place-keeping, in addition to bringing new people here,” Gorman says, “and reminding people that this isn’t a lost neighborhood and bringing back some of the stability that used to be here.”

The Commons: Detroit’s East Side

Canvassing brought The Commons to Detroit. Macc Development, a local 501(c)3 Christian community development corporation, knew they wanted a brick and mortar space for the neighborhood, but were unsure of what to provide within the space. The neighborhood’s response to Macc Development’s questions was consistent, they wanted a coffee shop or a laundromat. Thus The Commons, a laundromat with a coffee shop inside, was born.

For the employees at The Commons, like General Manager Grace Gray, getting to know the local regulars is an important part of working there.

We are really passionate about serving all members of the community, wanting to welcome every person that lives close by into our space.” Gray continues, “Macc development really seeks the holistic revitalization of our zip code specifically, 48214, and focuses really person by person and block by block. 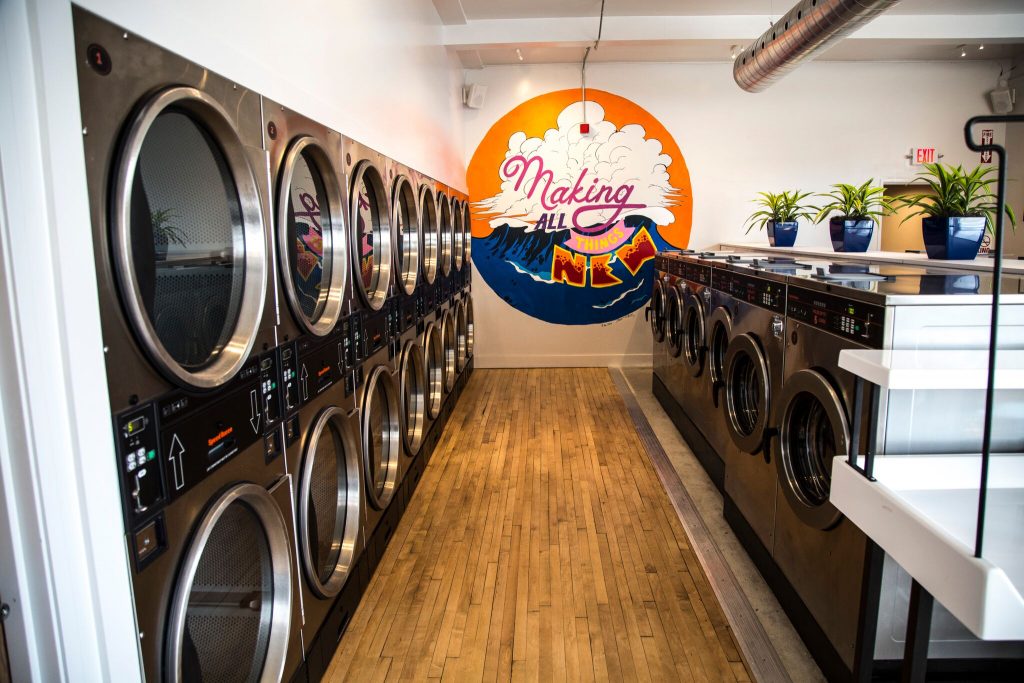 According to Gray, however, building these relationships has been made more difficult during the Covid-19 pandemic. The Commons’ laundry facilities are mostly unaffected, but currently, only takeout services are allowed for food and beverages, creating a barrier between staff and regulars. The Commons also offers 24-hour drop off laundry service that includes washing, drying, and folding of the laundry.

The Idea of Room Project began to surface in 2016 during the beginning of Donald Trump’s presidency. Christin Lee, in an effort to provide a safe place for the non-binary, transgender, non-conforming, bipoc, and female artists in Detroit she decided to 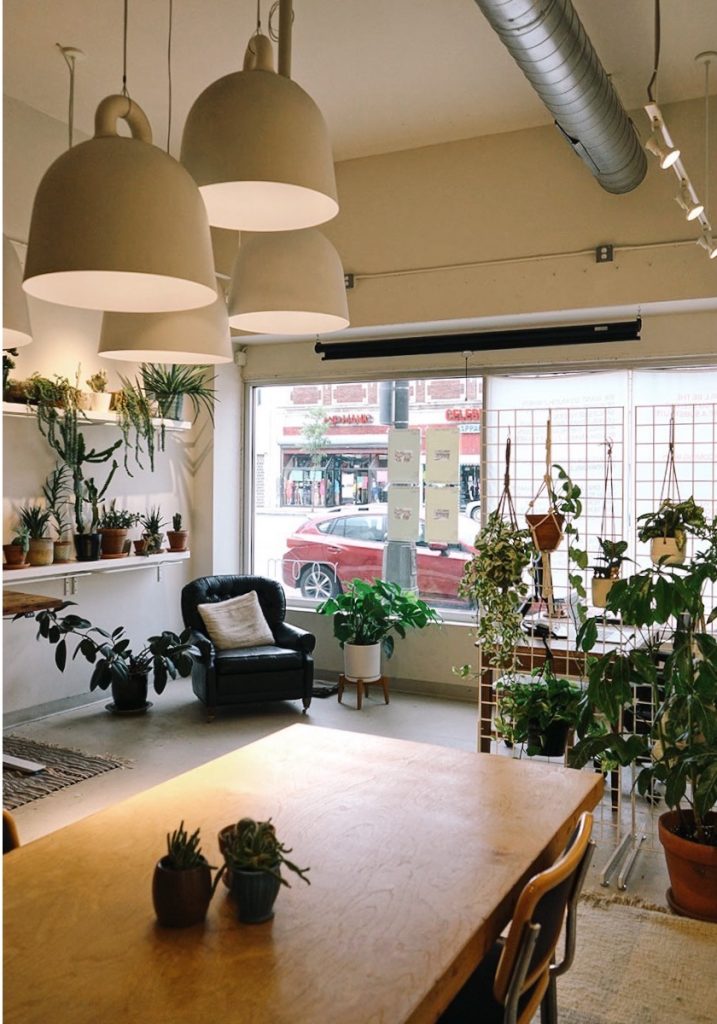 band together with a few friends and rent a space for a professional workspace.

Lee says her investigation for a space also started slightly selfishly. As someone who couldn’t focus at home or at coffee shops, Lee was desperate to have a clean, quiet space to write in. “It ends up being really important to take work outside of the home and do it in a place where it feels more professional,” she says.

Room is based on memberships. Members are provided access to the space 24 hours a day. Lee describes Room as a place where people leave their worldly definitions at the door. It is a space where people can play and imagine, free from thoughts of their home-life or work-life. To Lee the importance of having a community space is more than providing a safe place, it is also about a collaboration of artists, “I don’t think I could have a full life here, or anywhere, without a lot of creative, smart, funny, passionate, driven, curious people around me,” she says.

But how do we add to this resilience as individuals? We can get creative and use what the city provides like Community Push. We can be good neighbors like The Tuxedo Project. We can think outside the box and invest in our neighborhood like The Commons, or we can provide a safe space for our friends and family like Room Project. The possibilities are endless, so let’s get creative.