The Presidential Nominee Talked Coronavirus and Manufacturing While Speaking in Warren 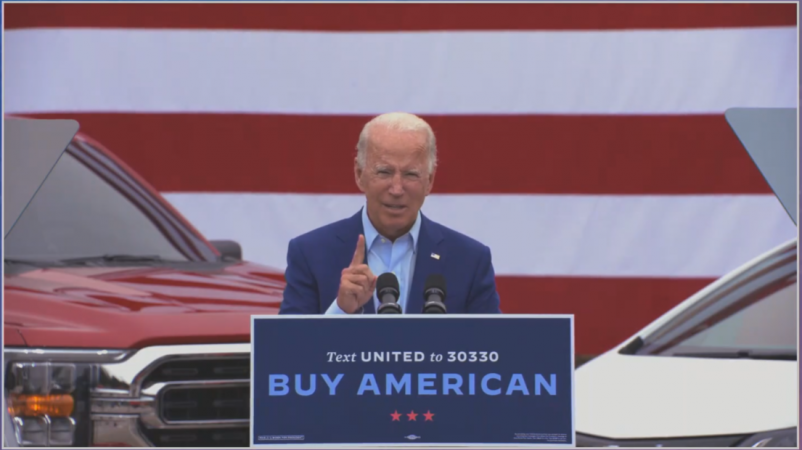 Speaking to a few dozen individuals during a socially distant campaign stop, Democratic nominee, Joe Biden, cut into President Donald Trump over his response to the coronavirus pandemic and touted a new tax plan aimed at profits made through overseas production. Sharing that he believes Trump failed the American people, Biden urged those listening not to lose hope as he praised the American automobile industry.

Speaking at the UAW Region 1 headquarters in Macomb County, the talk was Biden’s first stop in Michigan since becoming the formal nominee, as well as his first visit to the state since the Democratic Primary that took place on March 10.

Biden began by speaking of a Washington Post report about President Trump and his handling of COVID-19.

“On the day we hit 190,000 dead in the United States because of COVID-19, we just learned from the Washington Post columnist Bob Woodward that the President of the United States has admitted on tape in February he knew about COVID-19, that it passed through the air,” Biden shared. “He knew how deadly it was, that it was much more deadly than the flu. He knew and purposefully played it down. Worse, he lied to the American people. He knowingly and willingly lied about the threat it posed for months.”

The nominee called out Trump’s inaction, mentioning the lives that could have been saved had the president worked harder, while also saying that he is unfit to lead the country.

Another matter Biden mentioned during his speech was his “offshoring penalty surtax,” a tax that would punish businesses who outsource aspects of production overseas.

Mentioning the “planks” he added to his plan to modernize American manufacturing and technology, Biden stated, “Today, I’m announcing some additional steps to make this plank even stronger. First, we’re going to impose a tax penalty on companies that avoid paying U.S. taxes by offshoring jobs and manufacturing, only to sell those goods back to the American consumer.”

“If your big corporate strategy is to boost your shareholder’s profits and your CEO’s bonuses by moving jobs out, well, we’re gonna make sure you not only pay full U.S. taxes on those profits, we’re going to guarantee to add a 10 percent offshoring penalty surtax to your bill,” he continued.

Biden also pledged to bring American manufacturing back, harking back to the Arsenal of Democracy and the American workforce that became known to the world after World War II.

“I don’t buy for one second that the vitality of American manufacturing is a thing of the past. We have the most qualified workers in the world,” shared Biden. “American manufacturing, that’s the expression you heard your grandparents saying and it was the Arsenal of Democracy in World War II. Guess what? It’s going to be part of the engine of American prosperity now, in 2021. We’re going to make it happen with American grit, American determination, and American union workers.”

With Biden speaking on Wednesday, his talk comes just before a visit from President Trump, who will be speaking at an airport near Saginaw, MI. The complete address from Biden in which he dives into more detail about his tax plan, COVID-19, and his positive words on Michigan can be viewed on his Facebook page.