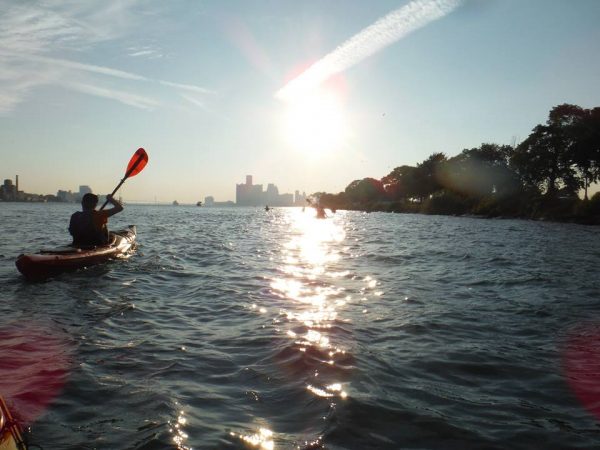 Tiffany VanDeHay, from Riverside Kayak Connection in Wyandotte, started kayaking in the Detroit River after coming here from a small town.

“When I moved to this area, it was a seeming overload of people, yet I realized there’s nobody on the water,” says VanDeHay. She and her husband, “kind of got kayaks because it’s a way to get out in nature.”

As she points out, there aren’t a whole lot of beaches or other places to access the water in and around Detroit, but when you get out in the water, everything opens up.

“People are totally amazed,” VanDeHay says. “You see a lot of wildlife. We’ve seen evidence of beaver. You’ll see mink occasionally. Colder times of year you can see bald eagles. I don’t think anybody perceives those kinds of animals being in a city.”

Being at water level also allows people to get closer to some of these animals than they would otherwise. This is about as close to wild as you can get and still be in the city.

VanDeHay’s company has been partnering with and building on the work of people like Mary Bohling from Michigan State University and Michigan Sea Grant, who has been working to improve the Detroit River for years.

“Thirty years ago, when the river was designated as an area of concern then, a lot of people came together and started working on solutions to the issues that had been identified in that process. And a lot of that was habitat restoration,” Bohling says.

Protecting fish and native plants has benefited humans as well, turning the river into a safer place for people in canoes and kayaks.

“There are dangers within the river,” Bohling says. “The habitat actually removes some of those dangers, especially with water quality and that kind of thing.”

It helps that paddle sports can co-exist peacefully with ecosystem restoration, providing opportunities for species like sturgeon to return to the river along with their human counterparts. More broadly, the development of blue trails is helping to create an engaged group of citizens with an active interest in the care of the river as well as an abundance of economic and recreational opportunities that connect the region through its many waterways.

On the Rouge River, which runs from the far west side of Detroit into a number of suburbs through its multiple channels, Sally Petrella with Friends of the Rouge has been doing similar work. She had been working as a biologist to monitor conditions on the river with volunteers and then began developing blue trails there as well.

THE POLLUTED SIDE OF THE ROUGE RIVER. PHOTO BY TONY KATAI

“Promoting and developing a water trail is just a great way to connect people to the resource,” Petrella says. “They see what a valuable thing the Rouge River is. It’s had a long history of being a very polluted river … Now that it’s getting a lot cleaner, there’s a whole lot of potential out there.”

The possibilities for engagement involve connecting people to the history, ecology, economics, and management of the rivers that cut through the metro landscape.

Friends of the Rouge offers a popular tour that explores the industrial corridor of the lower-Rouge near the Detroit River, passing by the Ford Rouge plant, the unique suspension bridges, and historic places like the site of the 1932 Ford Hunger March.

“It’s a bit overwhelming to do that tour to see all those huge buildings and all the industry and to go by the place where raw materials come in and basically a car comes out,” says Petrella.

But, being overwhelmed is kind of the point.

As Mary Bohling says: “When you get the large freighters that come up beside you, you can’t even describe the feeling of ‘oh my goodness,’ there’s this huge freighter, a thousand foot-long ship, and you’re in this small fifteen-foot boat.”

Petrella echoes this statement. “You see things very differently when you’re in a little boat on the water,” she says, adding that when they transitioned from doing bus tours of downriver industrial sites to kayak tours, their tour guide was very lost at first, “because it just looks very different when you’re at the water’s edge.”

Part of this difference seems to come from the sheer wildness of the city when approached by water. Trees and bushes often hug the water, obscuring structures and making places seem strange. Belle Isle will soon be added to this cabinet of water-born natural wonders. In many ways, this island feels like a piece of the river.

DREDGING IN THE BLUE HERON LAGOON. PHOTO BY HEALING OUR WATERS COALITION

Bohling says that they will be connecting the Blue Heron Lagoon at the eastern end of the island to Lake Okonoka that will then have an outlet into the Detroit River. This will allow canoers and kayakers to effectively paddle through the island, immersing themselves in the park in a new way. Efforts to get people out on the water have been aided not only by increased interest in river and streams created by projects like the Detroit RiverWalk but also by economic and other considerations.

“With the economic downturn, we’ve started to see a lot of people doing away with their motorized boats… investing in canoes and kayaks, you don’t have the maintenance fees and gasoline,” Bohling says.

This new interest in the river also creates economic opportunities for the city. Petrella mentioned a proposal by the Detroit Wayne County Port Authority to put in a new facility on the Detroit River for cruise ships that travel the Great Lakes. Smaller boats would then take visitors up the Rouge to Greenfield Village, showing them the sights along the way.

However, as municipalities create more physical access to the water in terms of boat launches and rental facilities, it will be important to create equity in access across age and income levels. Bohling has been partnering with a number of groups, including the National Park Service, the National Forest Service, Riverside Kayak Connection and Detroit recreation centers to get kids from the city out on the river.

They’ve been training young people on pools in the recreation centers and then bringing them out. This is all part of a larger push by the National Parks and Forest Services to introduce kids from the city to the possibility of careers in these fields. At the very least, this program will expand the number of people who get to experience those areas of the river where, as VanDeHay puts it, it’s so wild “you don’t realize that there’s civilization around you.”