Did You Know There’s a Body in Capitol Park?

…and it Keeps Moving Around 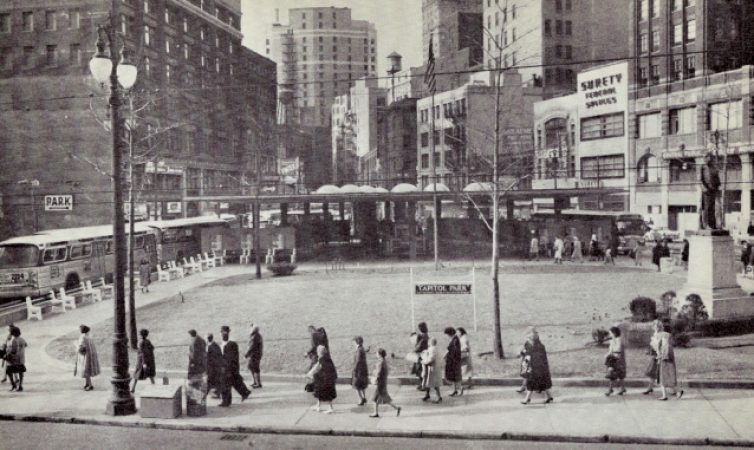 Capitol Park in Downtown Detroit has seen many changes over the years, including its most recent transformation into a home for swanky bars and apartments. However, long before that, the tiny triangle at the intersections of State, Griswold and Shelby served as Michigan’s territory and state capitol. The first Statehouse was a cozy 60-by-90 foot Greek Revival building, and its 140-foot tower loomed over the territorial town until 1893, long after the seat of Michigan government moved inland to Lansing in 1847.

Meanwhile, in 1837, the newborn state chose as its very first Governor (the youngest in American history), a strapping young lad named Stevens T. Mason. Well, chose isn’t exactly the right word. You see, Mason was the son of an influential Washington politician who used his pull to get Andrew Jackson to appoint 22-year-old Stevens to the governorship of the then-territory in 1834. The brash “Boy Governor,” as he was dubbed by Michiganders, dove into politics with as much zeal and as little caution as you’d expect.

Mason got results, no one can doubt that. At the time, Michigan and Ohio were fighting a petty and sometimes comical war over the Toledo Strip, an area along the states’ borders that both states claimed as their own. Believe it or not, Toledo’s port was rather important at the time. Mason’s solution to the conflict was to wheedle Congress into a deal that would ultimately prove tremendously beneficial for Michigan. In exchange for allowing Ohio to keep Toledo, Mason wanted two things: the Upper Peninsula, and Statehood.

In 1837, Mason got his wish, and the Boy Governor now presided over his very own State. In his whopping two years in office, Mason renamed the tongue-twisting “Catholepistemiad of University of Michigania,” for which future University of Michigan graduates should surely thank him, and moved it to its present location in Ann Arbor. He also sent geologist Douglass Houghton on an expedition to the newly acquired Upper Peninsula. Houghton found massive deposits of copper and iron ore. So, as it turns out, Masons’ trade of Toledo for the U.P. was a pretty good deal, all things considered. We got iron and copper and soon after, pasties out of it.

Between cholera epidemics and a financial panic in 1837, Mason’s popularity waned quickly and he was voted out of office soon after. He headed to New York and tried to build up a law practice. Unfortunately, the Boy Governor died soon after of pneumonia in 1843 at just 31 years old.

Mason’s travels didn’t end there, however. He was initially buried in New York and remained there for many years before Michigan decided it wanted its Boy Governor back. In 1905, to much acclaim and a massive parade attended by thousands, Mason’s body was returned to Detroit and buried in Capitol Park. He rested peacefully there for a couple of decades before street redistribution and construction caused the city to dig him up in the 1950s. Meanwhile, Lansing was clamoring to host his body, since they now held the title of state capitol.

Detroit resisted, though, and Mason was dug up, given yet another round of funeral rites, and moved across Capitol Park to a new spot. His statue, which still remains in Capital Park, was also relocated.

About that statue: it has an interesting story of its own. Its sculptor, Albert Weinert, created several notable statues in Washington D.C. and Chicago before crafting Mason’s monument from cannons melted down from Fort Michilimackinac to the north.

So, now we’re up to three separate funerals for the poor Boy Governor, and three moves. More renovations to Capitol Park kicked off in 2010, and Detroiters discovered a problem: the Boy Governor was nowhere to be found. Diggers assumed that Mason’s body was under his statue, where the workers from the 1950s placed it, but it wasn’t there. Or, at least, it wasn’t directly underneath it. For a day or so, there was rather a lot of head-scratching and finger-pointing and record-searching. The funeral parlor from the 1950s move proved not to have very good records, and in fact no one was quite sure if they were looking for a coffin, an urn, or a cement box.

Eventually, they found him, just a few feet away from where he was supposed to be. He was duly dug up, again. This time, record keepers noted the coffin type: grey, metallic, and set it inside a 6-foot-long concrete crypt. Stevens T. Mason was disinterred, moved another few feet across the park, and again buried with pomp, circumstance, and many mental notes to EXACTLY where he was buried back in his time. In fact, workers made sure to plop his statue dead center above his coffin, just in case he needed to be found again.

Next time you’re in Capitol Park, make sure to stop and visit Stevens T. Mason, the beloved Boy Governor who shaped Michigan into the state it is now. He’s had plenty of funerals, but it can’t hurt to pause and wish him well—and tell him to rest easy.