Over 430 Hours of Work, Stoneworkers Had Their Work Cut Out for Them When Restoring the Buildings Ornate Capitals 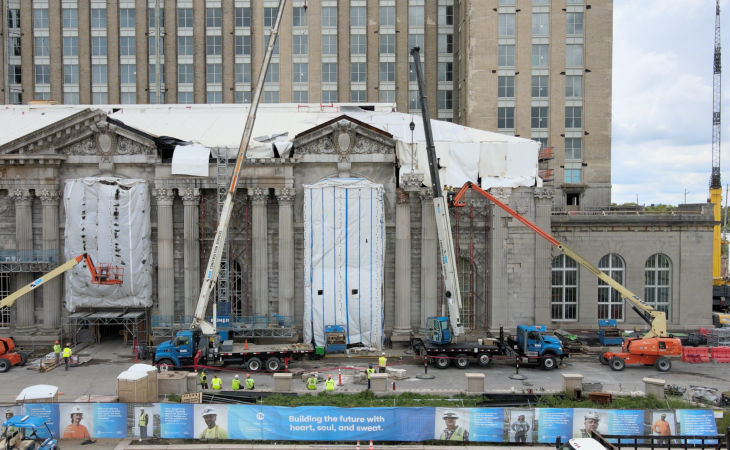 Designed by Warren & Wetmore of New York City and Reed & Stem of St. Paul, Minneapolis – the same duo who had worked together on the  Grand Central Terminal in New York  –  Michigan Central Station has a rich and varied architectural history and a story that continues today.

The Beaux-Arts style station opened its doors on December 26, 1913, replacing the original depot which was shuttered after a major fire, forcing the still unfinished new station into early service.

Upon its opening, it was the tallest railroad station in the world – a towering 18 stories high –  and one of the tallest buildings in Detroit.

The railroad invested a total of $16 million (nearly $332 million today) on the new station, office building, yards, and the underwater rail tunnel –  the first immersed tube tunnel to carry traffic, namely passenger cars and freight trains from Detroit to Windsor. Today, the Michigan Central Railway Tunnel sees about 400,000 railcars pass through it annually.

In its heyday, more than 200 trains and 4000 passengers traveled through the station daily, with 3000 people working in the office tower.

The numbers regarding the materials are just as impressive.

The station is constructed of more than 8 million bricks, 125,000 cubic feet of stone and 7000 tons of structural steel — plus another 4000 tons in the sheds. The foundation has 20,000 cubic yards of concrete.

The exterior is as elaborate as the interior. Facing north onto Michigan Avenue the facade of the grand waiting area features 18 columns topped with ornately carved Capitals – a key Beaux-Arts style architectural feature – sculpted from raw stone material sourced from Dark Hollow Quarry in Indiana.

Fast forward to more than three decades after the last train left the station, and those Capitals are badly eroded.

Enter Capital Stoneworks in Mid-Michigan, hired to repair all of the stonework in the massive structure.  President, Brandon Hornung and his team have had their work cut out for them – in more ways than one.

Early on, Christman/Brinker, the Construction Manager, made it clear Ford is very conscious about matching the materials being used now to those used when the station was built, keeping it as authentic and original as possible, Hornung says.

Knowing this, Hornung set out early to do his homework on the origin of the stone used for the Capitals. What he discovered was that the original Dark Hollow Quarry had closed in the mid-’80s. 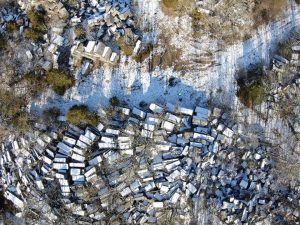 THIS AERIAL SHOT OF DARK HOLLOW QUARRY SHOWS THE FIRST LIMESTONE BLOCK BEING HAULED OUT.

Not to be deterred, he tracked down the current quarry land owner and found that close to 50,000 blocks of limestone still sit on the quarry floors today. The owner gave Capital Stoneworks, Ford, and Christman/Brinker full access to gather the materials needed for the Capitals as well as the rest of the project.

The next order of business was getting physically into the Quarry. “Since it has not been in use for over 30 years, there were no longer working roads into the Quarry”, said Hornung. “So we had to have them built.”

Next, a full month was spent measuring, marking, and pulling blocks that would be sufficient for their use.

Capital Stoneworks’s subsidiary company, Clear Creek Stone in Bloomington Indiana, was where the blocks were sent to be slabbed. Finally, the stone was shipped to Bridgeport Michigan to Capital Stoneworks for final fabrication.

The team’s original intent involved using a 3D Scanner on the original Capitals, blending the images to create an ideal version, and then carving them with a CNC router. Due to how badly the Capitals were damaged and deteriorated, 3D scanning was not an option.

So, uniquely skilled expert carver, John Goodrow Sr. with over 30 years’ experience, was called upon. “We are very fortunate to have John on our team,“ said Hornung. “There are not many carvers like him.” 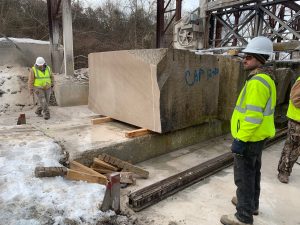 THE FIRST OF MANY LIMESTONE PIECES BEING REMOVED FROM DARK HOLLOW QUARRY.

Goodrow, took on a 21,000 lb. block of limestone to create the model. His 428 hours of work within October and November of 2020 involved using air-powered chisels, while pneumatic handsaws were used to remove excess limestone stock. Once complete, this model then served as the template to create the others.

Five of the capitals had to be remade completely. Once they made the first Capital utilizing hand carving, they were able to go back to the original plan and 3D scan the hand carved Capital and make the remaining four utilizing CNC machines. The remaining thirteen Capitals involved a dutchman approach – cutting out small damaged areas and using matching pieces made of the new limestone to replace them.

This past month marked the completion of this nearly 18-month process. 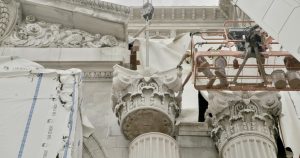 THE FINAL CAPITAL IS PLACED ON MICHIGAN CENTRAL STATION FACADE

Of the project overall, Hornung says “for me as a stoneworker, being involved in a restoration of this magnitude, that involves a landmark such as the train station and its unique architecture and craftsmanship is a once in a lifetime project.”

And he closes with “this building could have easily been destroyed, but the fact that Ford Motor Company purchased it and is restoring it toward the future of mobility and transportation is a sign of the resurgence of Detroit.”