Happy Pride Month! The pandemic and other world events can’t hold back the energy for Detroit Pride this June 2022. The city is shining a brighter light as the Motor City Pride festival and parade return to Hart Plaza on June 11th & 12th. The LGBTQ+ art scene in Detroit is lifting up the historically diverse Detroit LGBTQ+ community in another authentically, unapologetic celebration at the first and nation’s largest exhibition.

The LGBTQ+ community is historically suppressed and overlooked by traditional institutional systems, but this has only amplified the cultural engagement. Detroitisit rounded up a condensed list of what’s happening in the queer art scene in Detroit this June. Mighty exuberant colors & stories to be on display. 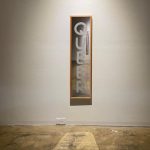 What better way to appreciate the queer community and the queer art in Detroit than a month-long display of exhibitions? A not-for-profit organization, Mighty Real/Queer Detroit, in partnership with the City of Detroit Office of Arts, Culture, and Entrepreneurship, kicks off their celebration of the 50th Anniversary of Detroit Pride.

This Giant City-Wide Fine Art Exhibition and Event-Series by LGBTQ+ Artistsis to include contemporary art openings this week and events happening throughout the entire month of June. In partnership with the City of Detroit Office of Arts, Culture and Entrepreneurship, with the Ford Foundation as the presenting sponsor.

Here are just a few LGBTQ+ artists to get to know as they proudly take their platform.

Tony Whitfield is a multi-media artist, designer, and educator. From theater, art, and, photography, his work has been recognized in LaMaMa, ETC as well as shown in solo and group exhibitions in galleries and museums including the New York’s Museum of Art and Design, Leslie Lohman Museum of Lesbian and Gay Art, The Pop-Up Museum of Queer History, the Instituto Cultural Peruano Norteamericano in Lima, Peru, the LGBTQ Centre in Paris, and published in the US and abroad. His video installation, Paris, 1938, was featured in Paris’ NUIT BLANCHE 2017. Find Whitfield writing about art, new media, film, performance, and design as well.

Detroit-based artist, singer/songwriter, and art therapist, Karianne Spens-Hanna’s art and music examine the interconnections between humanity, the environment, and entropy. These elements make up her selective palettes. Spens-Hanna graduated with honors from College for Creative Studies, receiving a BFA specializing in painting, drawing, and sculpture. She received her M.Ed in Art Therapy with honors from Wayne State University. Her work in the field of art therapy, and studies in psychology, ecology, anatomy, and physiology deeply inform her intuitive practice. The flow-state is visible in her organic creations that allow for a deeper reflection and a meditative, sensory experience. Click HERE to view her site. 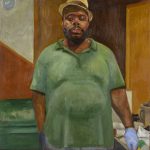 Born in Detroit in 1966, Richard Lewis started drawing when he was four. A meticulous eye for human faces was awakened at age 10 when his godmother told him to study his family and go into the next room and draw. He graduated from Cass Technical High School in 1985 and earned his B.F.A. from College for Creative Studies, where then went on to get a Master’s degree from Yale School of Art. The heart of Detroit never left him on his journey.  He ended up returning to Detroit to teach African American art history and was an artist-in-residence at The Studio Museum in Harlem. He then moved back home to Detroit in 2002 and was a Kresge Artist Fellow in 2011.

Kasper Ray O’Brien was born in Southgate, MI, but currently lives and works in Detroit, where he contributes his unique body experiences to the LGBTQ+ art scene in Detroit. Kasper received his BFA from the College For Creative Studies, Detroit. He uses both drawing and sculpture to help us look into the relationship between the body as a condensed expression of force and the potency of this fraction. Kasper confronts his own body and uses it directly to engage with personal narratives involving sex, queerness, trauma, and comfort. The body is a canvas and ultimately, a greater expression of individuality & vulnerability. Through the concept of the mask, he contends with self-image, persona, and performative anonymity.