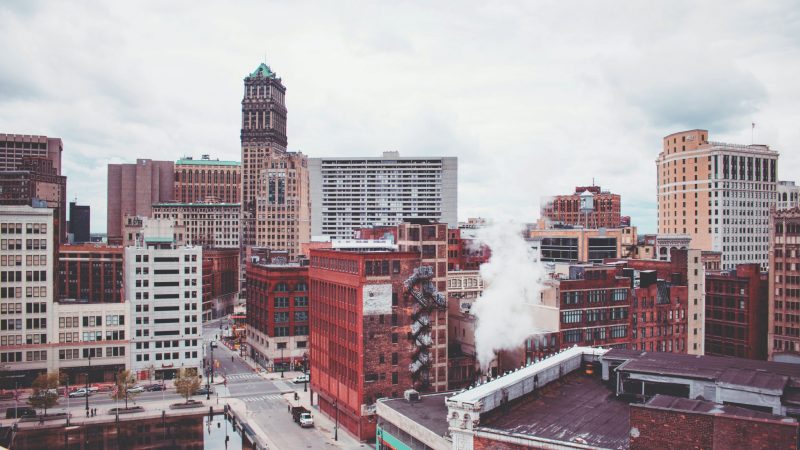 Mark Twain said it well, “History doesn’t repeat itself, but it often rhymes.” As I fell into a rabbit hole of Detroit history, this refrain was the drumbeat of each new Wikipedia page I clicked. Detroit is known as a majority Black city, but before I began my search, I had never wondered how this came to be. As I took more time, I found one source of the drum’s beat: migration.

This city’s history is vast and warrants a book’s worth of words to discuss it thoroughly. What follows is a highly curated, shorthand version of Detroit’s 20th century past, containing only what is applicable to the city’s present-day demographic population.

Detroit’s history of Black residents began before the 1900s, but the city’s Black population didn’t grow exponentially until the Great Migration. Attracted by the promise of jobs in the booming automotive industry, large waves of Black migrants from the South, as well as Europeans and Canadians, traveled to Detroit. The Great Migration began in 1916 and lasted until 1970.

African Americans continued to face severe racism in the South, and promises in the North of well-paying jobs spurred the migration of more than six million Black Americans to fill the positions. The auto industry influenced this migration heavily. Henry Ford offered a high-paying living wage, 5$ per week versus the average 5$ per month for Black Americans.

In “Black Detroit” by Herb Boyd, he discusses how this created a quick rise in Northern America’s Black population, “Between 1910 and 1920 New York State experienced a 66 percent rise in its Black population…. And Detroit, with a 611 percent surge, was by far the fastest-growing African American urban center.”  In real numbers, this meant just shy of 6,000 Black residents in 1910 and over 40,000 black residents by 1920. By 1970 Detroit had over 660,000 Black residents living within the city limits.

Suddenly, almost overnight, Detroit’s dramatic increase in population put the city in the national spotlight; it became a symbol of full employment, high wages, and a better life for African Americans.

This was great right? Well, Icarus flew too close to the sun, and maybe at that point in time, Detroit did too.

Detroit was a hub of well-paying jobs for African Americans. This sounds great on paper, but below the surface, other things were being sacrificed in order to make this decent wage come to fruition. Though racism wasn’t as blatant in the North as in the South in the early to mid-1900s, it was still very much there. Many White landlords in Detroit denied housing for Black residents or charged them a higher rate.

As more and more Black Americans came to the city, housing offered became cramped. An African American, John C. Dancy, writes about the living conditions at the time in his memoir, “Sands Against The Wind”, “There was much doubling up of families, in houses that, in many instances, were unfit for human habitation. Conditions grew worse. Rents were high. The average rent for white families was $30 a month; for Negro families, it was closer to $50, and the Negro got worse housing for his money.”

This wasn’t the only way Northern racism manifested, though. Along with the denial of housing for African Americans came White American’s inexcusable desire to be separated from, and in better neighborhoods than, Black Detroiters. This led to a migration of white Detroiters to suburban areas, which coined the term White Flight.

Just as Black Americans flocked to Detroit, so did white Americans. In 1910 Detroit’s white population was 459,926 and continued to rise until it peaked in the 50s at 1,545,847. The 1967 Riots, however, influenced the city’s swap of racial majority. The riots began July 23rd and lasted until July 28th 1967, as a demonstration of Black Detroiters fighting against unfair treatment of white police officers.

The riots were devastating for Detroit where white Detroit residents fled the city, afraid to be caught in the frays. Between the 1960 census and 1970 census years, over 344,000 white Detroiters fled the city to take residence in the city’s suburbs. By 1990, white Detroit’s white population fell from the 1,182,970 it was in 1960, to 222,316. And it continued to keep falling.

In an interview with the Detroit Historical Museum, Janice “Karen” Kendall, a young downtown Detroit resident at the time, discusses her leaving the city during the riots,

Well my family just encouraged me to get out of there. And that’s what I did. I packed up my stuff and I left…. I didn’t go down [back] for 20 years.

As white Detroiters fled the city, vast resources for education and employment went with them. Inner-city schools were closed and moved to the suburbs as did the downtown automotive manufacturing plants. This resulted in unequal job loss, as well as fewer jobs overall, for Detroit’s remaining Black residents. It wasn’t until the late 2010’s that Detroit began to see their return to the city.

THE RHYME OF IT ALL

The Great Migration saw Black Americans escaping the oppressions of the South, but only to find different oppressions in the Midwest, though the oppressors were one and the same. White Flight saw a white-superiority ideology, resulting in a rejection of racial integration. These two stanzas of history didn’t repeat each other word for word but found in each other a rhyme.

There is a third stanza beginning to write itself. Since 2010, Detroit’s white population has been consistently increasing from 10.6% to 14.7% in 2019. This mirrors Detroit’s White Flight after the 1967 Riots. Even the Riots themselves were met with their own rhyming couplet in the Black Lives Matter (BLM) protests this past summer.

Yet, enter the pandemic, which has resulted in continuing unemployment inequities. According to the University of Michigan,

Nearly half of Black Detroiters and one-third of Latino Detroiters say they have lost their job due to the pandemic compared to 22% of white Detroiters.

This city is far from perfect, but now there is a greater call for advocacy for diversity and inclusion. Detroiters proved this during the BLM protests by gathering together, no matter their race, age, gender, religion, marching against racial injustice. We are on a path toward a once again thriving city, yet to better understand our history we can better influence Detroit’s fourth stanza towards a more inclusive future.