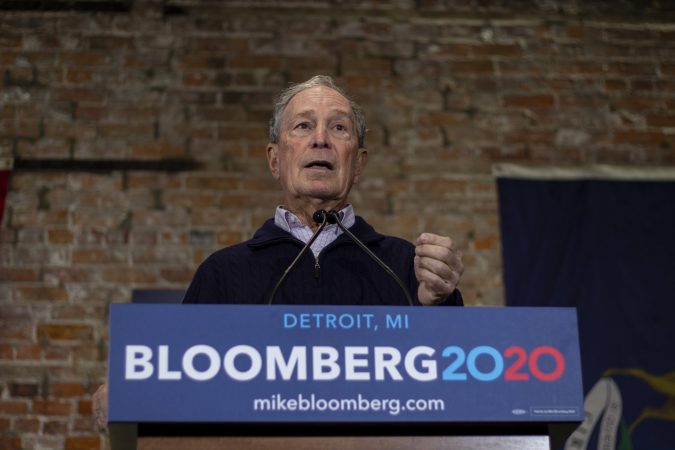 Michael Bloomberg, billionaire and former mayor of New York, launched his last-minute presidential run in November by pouring $80 million into various advertisement campaigns while shifting his focus of campaigning to the states of Wisconsin, Pennsylvania and Michigan. Beginning the 2020 campaign season early, The candidate officially opened his Michigan Campaign headquarters in Detroit’s Eastern Market.

Formally celebrating on December 21st with a rally after a visit Detroit’s Avenue of fashion, about sixty people total from across metro Detroit gathered inside the Eastern Market space as Senior Vice President at MGM Grand Detroit, Juliette Okotie-Eboh, introduced the candidate. During his brief appearance, Bloomberg’s main talking points were his track record as mayor of New York and how he feels America needs to come together.

Kicking off his speech Bloomberg said he did not want to ignite a debate about New York versus Detroit style pizza, but he did praise the Eastern Market staple, Supino Pizzeria, stating that the pizza, “tastes better with a Verner [Vernor’s],” a blunder which drew laughs and corrections from the crowd. Quickly moving on, he continued by saying that other Democratic candidates have not visited Detroit because they feel they already have their votes.

Bloomberg’s statement comes with little truth though given that Senator Elizabeth Warren has already opened a Michigan Office in Detroit and Bernie Sanders recently held a massive rally at Cass Tech High school. South Bend Mayor and candidate Pete Buttigieg also held a private fundraiser for donors in Detroit, making Bloomberg one of the multiple candidates to visit the Motor City.

Another point of Bloomberg’s speech was his idea that Democrats need to work with Republicans if they are going to succeed in passing legislation. The candidate asserted the need to work across the aisle, calling out Trump’s divide and conquer politics, while saying he is the candidate best able to defeat him.

“We need someone to pull this country together,” said Bloomberg. “Donald Trump is not a unifier. He’s a destroyer who divides people.”

The candidate also stressed the need to address climate change, and while not putting forward any particular points in his speech, Bloomberg assured his supporters that he would make addressing climate change a policy of his administration.

While bringing up support for the automotive industry, and expressing concern for climate change, an issue on almost every Detroiters mind was left out of the speech, the concern over high auto Insurance rates. Currently, a bill at the Federal level, sponsored by Congresswoman Rashida Tlaib (D-MI), aims to address the matter by only allowing driving records to be used in determining car insurance rates and eligibility, rather than someone’s income or education levels.

Taking questions after his speech, Bloomberg addressed if his administration would support Federal Legislation similar to Tlaib’s bill, Bloomberg replied, “I just don’t know enough about the issue to comment, it’s a local issue, and I don’t know.”

Another point brought up to Bloomberg during the short press briefing was how he would get non-voters motivated to go to the polls in November. According to a 2018 study, Pew Research found that non-voters in 2016 ultimately led to the election of Donald Trump, make up a group larger than registered Republicans and Democrats.

In responding to how his campaign would motivate non-voters and raise voter turnout in 2020, Bloomberg stated, “Everyone should go out and vote, it’s one of the great privileges of democracy. If you don’t go and vote, don’t complain.”

Sitting very low in the polls, Bloomberg is just the latest member of the already crowded Democratic Primary. His Michigan Campaign Headquarters is currently located next door to Supino Pizzeria in Eastern Market just off of East Fisher Freeway.

John Bozick is a journalist based in Metro Detroit. His previous experience includes reporting on the refugee crisis in Greece and the political scene in the United States amid both the 2016 and 2020 elections. His local focus is community development, activism, state and local politics and environmental justice.

Where to Get Pie and Tasty Desserts in Detroit This Thanksgiving

7 Female Business Owners To Support in Detroit This Holiday Season