Ford Mobility City:One Challenge – What it Means for Corktown and Detroit

Mobility Challenges for Cities are Starting to See Innovative Solutions Thanks to Collaboration between Ford, City and State 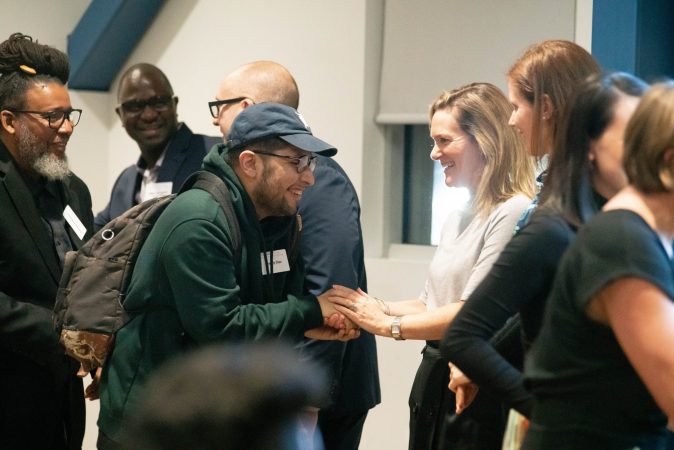 The City:One Challenge TM presented by Ford Motor Company awarded three grants to applicants who are looking to improve mobility within the City of Detroit – starting with the neighborhoods around Michigan Central Station.

Out of the 164 global submissions, those chosen after review were “Bridging Histories, Building Future,” “The Wayfinders Smart Travel Ecosystem,” and “Mercy Education Project,” who all provided very different solutions to real problems within the city.

Detroitisit sat down for a chat with Aniela Kuzon, Co-Founder and Global Lead, City Innovations at Ford Motor Company during the City:One Challenge TM Event last week that went down at The Corner Ballpark in Corktown, and she shared the following:

“The City:One Challenge TM is something we’ve hosted now in seven cities. And so, when we purchased the Michigan Central Station, we really wanted to do it here as part of our community benefit agreement. And what we did is we worked to identify what was a question that could really address resident concerns, and so we came up with ‘How can mobility help residents, workers, and visitors not only today but as all of the changes that are occurring take place?’ And we spent the first two months just listening, going to different community locations, hosting conversations and really understanding what’s working, what’s not. And from there, we identified a few opportunity areas that entrepreneurs can respond to. We had 164 proposals, including 25 from the impact area, and we ultimately selected, in partnership with the community itself, 12 finalists who received $6,500 and resources to take their idea and actually develop a pilot proposal. Tonight we will award three winners up to $250,000.” 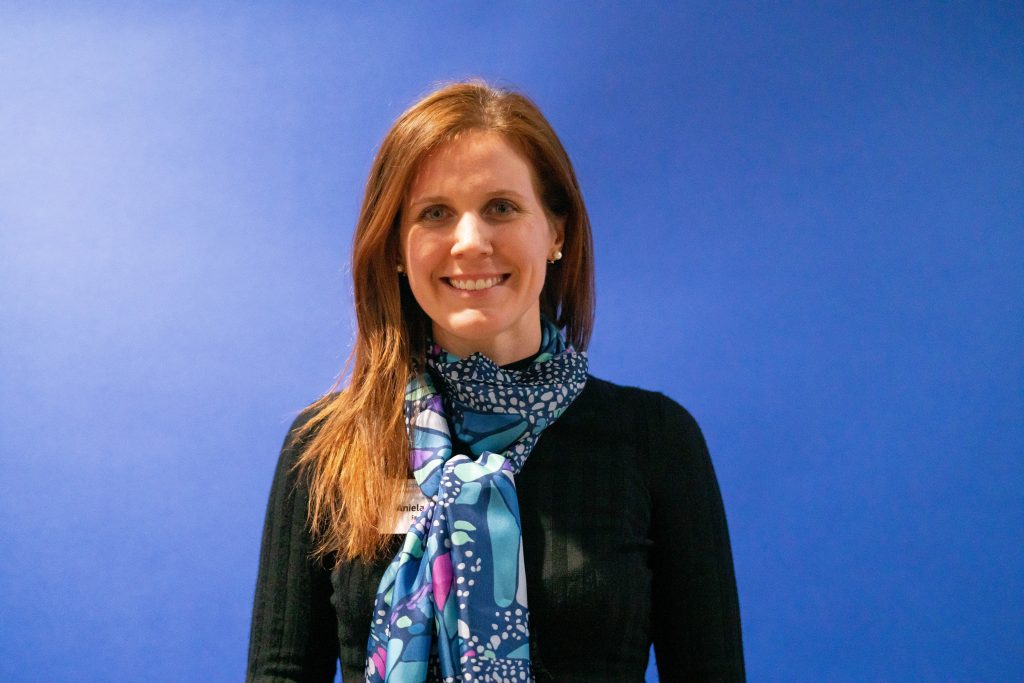 The one thing to take note is how much the team from Ford is concerned and continuously including the community within their decisions – not such a common trait within the corporate sphere. Kuzon continues,

“I think some of the things we heard from residents were the area feels at times disconnected from the broader city. A lot of highways, a lot of railroads, that can kind of give the impression of an island effect. And so we wanted to really think about that and how we can start to increase the ability to walk and bike and get around. We also heard that many people don’t necessarily feel safe walking around, biking, taking a scooter, not only because of the car culture but just because it can be dark a lot of the time throughout the year. If you’re not sure when the bus is coming and you’re alone, it can be a tricky situation to navigate… I think a lot of the proposals, in particular, the finalists actually address this and the winners that we will select, I think, have great ideas that will really, one, come to life in the community in the next few months, but also make a big impact on those concerns that came up.”

And that they did. Among the winners, “Bridging Histories, Building Future,” “The Wayfinders Smart Travel Ecosystem,” and the “Mercy Education Project” ended up taking the coveted glass trophies, along with a grant promised to fund their project. And it doesn’t stop there. Mary Culler, President, Ford Motor Company Fund, shares that the teams will not only receive the funding but will also be assisted in any hurdles they may encounter while getting started.

“At Ford, we provide a lot of mentoring and support around these kinds of programs because we want to encourage diverse thinking and ideas, whether it’s in technology, design thinking, or problem solving,” says Culler. She also noted the prominent sentiment that Henry Ford believed in, “that it’s not just enough to make money, you really have to give back to the world.” 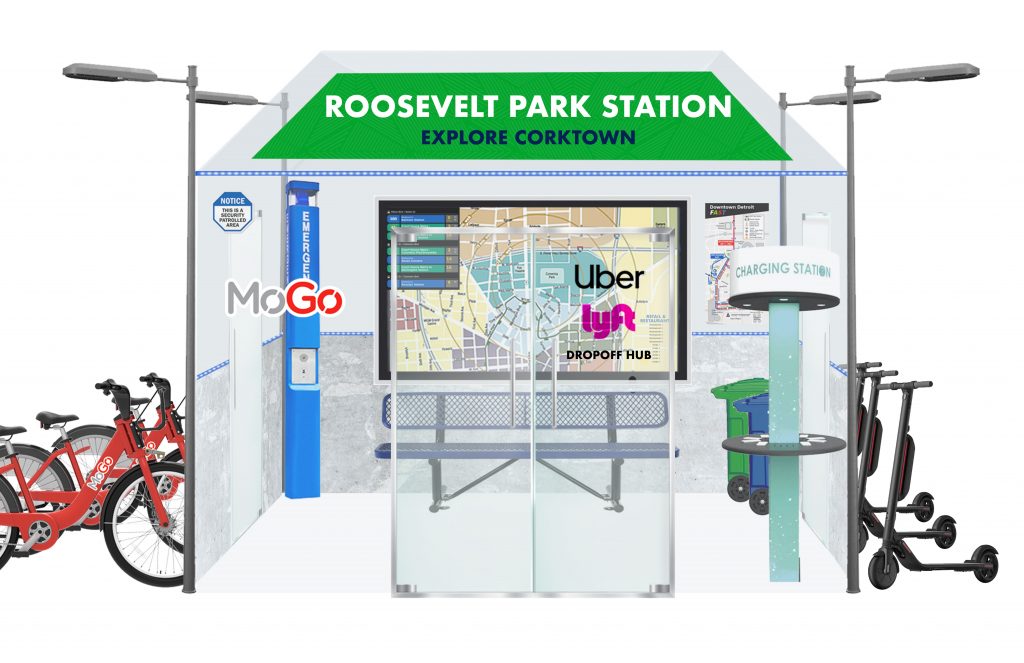 The Mercy Education Project was created by a group of high school students for women and girls in Southwest Detroit who are looking to be educated, molded and have a safe space to grow their knowledge. MEP offers GED prep classes, workforce development, and a clear bridge program that offers training and guidance to a professional career after obtaining their GED. The program also offers after school tutoring, STEM learning summer camps, robotics, college readiness programs, and extracurricular activities that promote literacy. Plus, they provide transportation, daily meals, and help with childcare for the GED students, and the services are 100% free.

The girls shared their ideas around the project, about trying to provide a safe place for girls to work, collaborate and grow, and when asked where they hoped to see Detroit in the next five years, one of the team summed it up the best saying “You want to see it succeed. And I want to see a lot of people have jobs, and be able to achieve more than they think that they can. And just overall, I want to be able to see the program support one another.” That thought alone encompasses the program overview and desire to make MEP a project that is utilized and built over time to be a staple in the Southwest Detroit community. 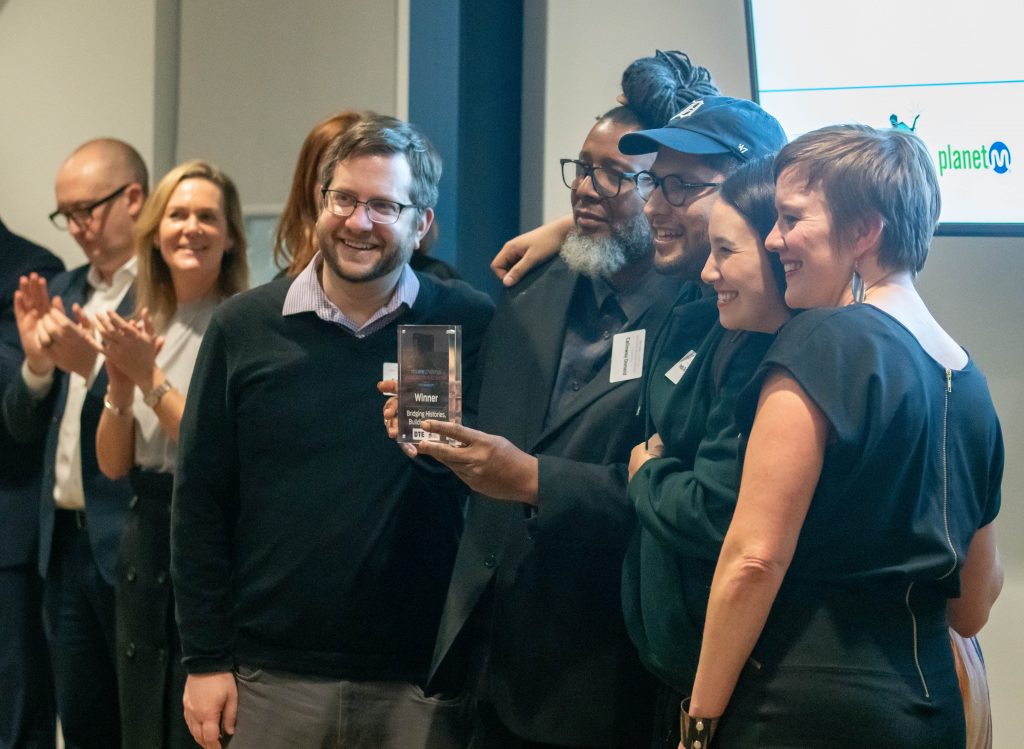 Out of the three winners, “Bridging Histories, Building Futures,” helped to fuse work from Donald Calloway and Freddy Diaz, two very different artists, who will collaborate to design Michigan Avenue as it crosses over the Lodge Freeway and turn it into a more welcoming spot. This project was also supported by DTE and Downtown Detroit Partnership.

A rendering of how Michigan Avenue will look as it crosses over the Lodge Freeway by winning team Bridging Histories, Building Futures.

“We went to the site and did sidewalks as a team and realized this isn’t a place where people are NOT traveling, people are using this already. So it’s a connector, and so our goal is just to increase the pedestrian experience, the sense of place, and give them the type of experience they deserve, something between communities to bridge a formerly growing area with a newly growing area. Really, the very core is to increase public art and culture that is already a staple of the neighborhoods,” shared the team after their win.

Freddy Diaz shared his side of the vision, and where he stood when he started the project:

“When they invited me to become part of the project, one of my biggest conditions to be able to work with them is they needed to be inclusive of the community, not only the community as a whole, but with the youth… I started doing graffiti, there was no structure, yet there is the opportunity to become stable artists making a living off the craft. And so this becomes a platform for young artists coming up to learn the process from start to finish… And so this becoming a platform is amazing because this will be one of many templates for the future.” 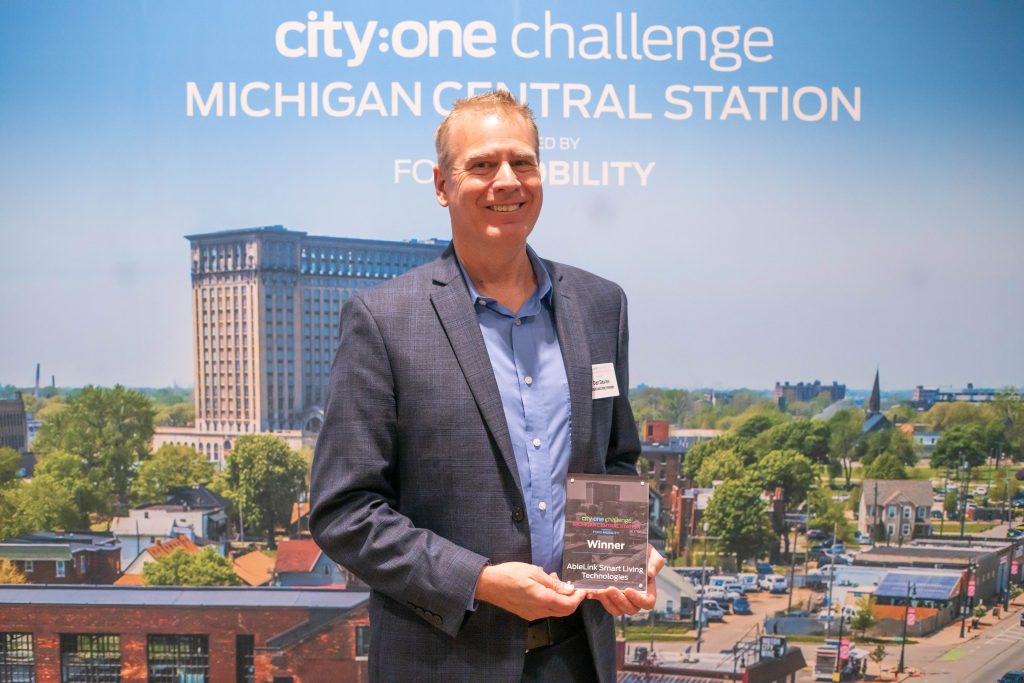 “Our proposal was to increase independence and transportation for people with cognitive disabilities,” says Daniel K. Davies of AbleLink Smart Living Technologies, who created the proposal for The Wayfinders Smart Travel Ecosystem. “That’s folks with intellectual and developmental disabilities or autism, or traumatic brain injury who many times those individuals are highly dependent upon others for transportation. The agencies that provide services to them give them rides to work and back, or to the doctor, they just don’t have the opportunity to have the freedom that comes with independent transportation. Our project is called The Wayfinders Smart Travel Ecosystem, and what we will be implementing is that ecosystem in the Detroit area to provide tools for folks with cognitive disabilities to be able to move from dependency to independence in transportation.”

Davies goes on to share a deeper dive on how his team’s program will tap into the systems already currently in place in in the city, saying that “Detroit transportation system utilizes a transportation standard called GTFS, which is the General Transit Feed Specification that was initiated by Ford and Google. Many cities utilize that to publish their transit data. We interface with that same data set to create custom routing for individuals with pictures and audio and instructions for how to take the bus in the Detroit area.”

THE ROLE OF THE CITY WITHIN THE CITY:ONE CHALLENGE TM 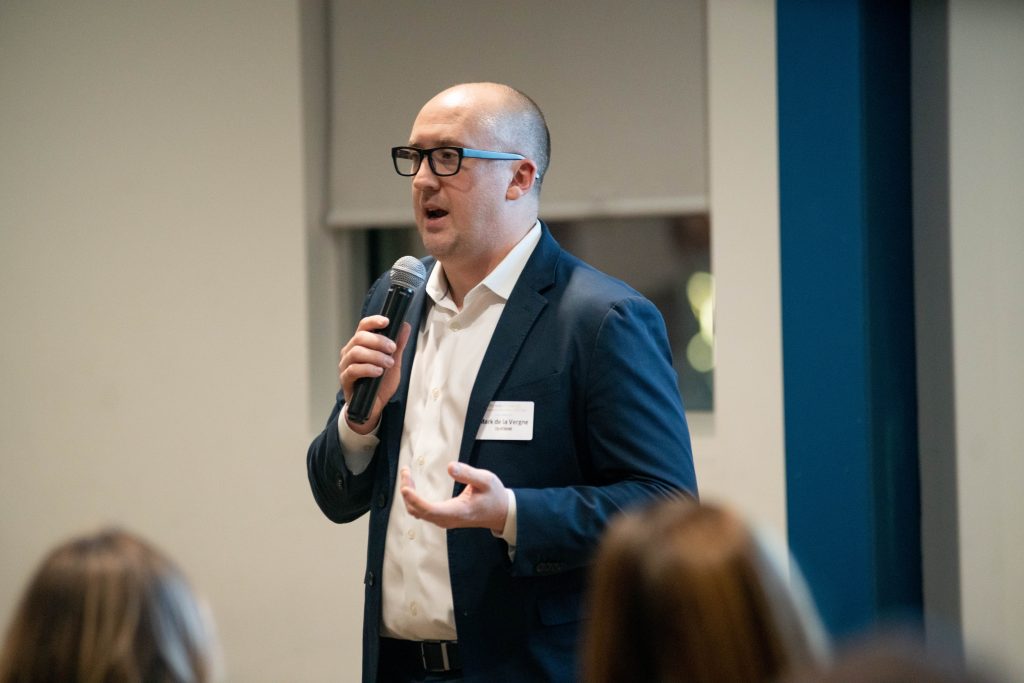 Mark de La Vergne took a moment to discuss mobility from the city perspective, starting with his role as Chief of Mobility Innovation for the City of Detroit, before tackling how the city ties into the City:One Challenge TM with Ford.

“The mayor hired me a few years back to essentially get new things up and running around mobility. That there was a lot of investment going in with DDOT, traditional transit, doing a lot with contract works… traffic signals, bikeways, making it easier for folks in our streets. I saw the opportunity to be where we are in the city, but also just the overall mobility landscape… Programs with Lyft, getting Car Share, Bike Share, Scooters, Autonomous Vehicles…”

When looking at all of the things the city has to be concerned with in regards to mobility, de La Vergne shared the criteria used to judge each of the finalists. For example, looking at how the proposal would impact locals, would it help provide better and safer communication towards mobility and more.

“When we think about transportation, mobility, we often think about our challenges, but there’s also a set of scenarios that exist. So, that’s what we were kind of looking through to make sure that these were solutions that weren’t ‘designed for the designer,” and also designed for the first time.”

de La Verge goes on to say that “If you drive you should take the bus. If you take the bus, you should walk.” He shares that everyone at DDOT is adapting themselves to different methods of getting around helping them to understand what they’re creating and who they should be creating it for. Keeping in mind things like where to place instructions if someone’s using a wheelchair, or what is going to be the easiest for someone who has a disability. Looking at such different hurdles and issues, and finding ways to make it easier for those around them with their research, is key to success in mobility in a city like Detroit.

Judging by the chosen projects within the Ford Mobility City:One Challenge TM, it’s safe to say that bigger and better ideas are on the horizon. Not just for Corktown, but for Detroit as a whole.