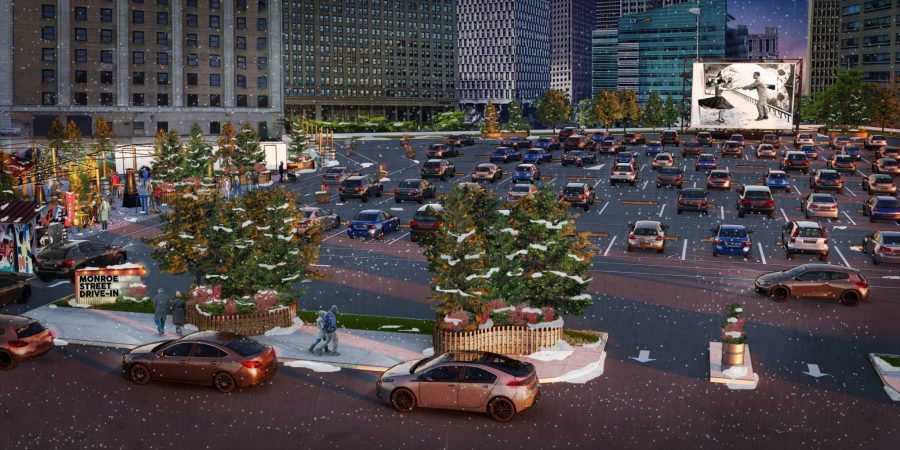 A new drive-in movie theater is coming to Detroit! Bedrock and Emagine Entertainment have teamed up to bring the Monroe Street Drive-In Powered By Emagine movie theater in the heart of downtown Detroit on January 22, 2021. The theater will boast a state-of-the-art outdoor screen that will show family-friendly feature films, just steps from Campus Martius Park and downtown’s Woodward shopping district, kicking off with a showing of the 1993 classic Jurassic Park on night one.

The theater will operate with showtimes every Thursday, Friday, Saturday and Sunday at 7 p.m. and promises to feature all of the amenities guests have come to love about an Emagine showing, including interactive lighting, leading AV technology and a modular concessions pavilion serving traditional movie theater concessions. There will also be warming areas, plantings, public restroom trailers and a 60×32 ft digital projection screen on the site.

The ultimate goal is to unite the community and ensure Detroiters are able to enjoy this new luxury in the city. To do so, Bedrock has reserved January 22, 2021 as a complimentary special pre-screening for local Detroiters at the Monroe Street Drive-In Powered By Emagine.

Movies have always offered us a couple of hours to unplug and escape, and that has never seemed more important than now,” said Ivy Greaner, Chief Operating Officer at Bedrock. The drive-in theater is our way of offering the community a way to get out of the house and safely enjoy a night out for the whole family. 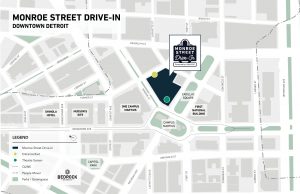 The Monroe Street Drive-In theater is not only situated in the heart of downtown, but sits on the historic Monroe Block, which was home to Detroit’s first theater district. At its peak in the early 1900s, six movie theaters called Monroe Street home – including the National Theatre, whose 1911 era façade still stands.

Additionally, for one night each month Bedrock will work with local schools, community and neighborhood groups to ensure that they will be able to enjoy a family-friendly screening free-of-charge.

According to a press release from Bedrock, this is a continuation of Bedrock’s multi-million dollar “Decked Out Detroit” initiative in partnership with the Rocket Community Fund and was created to ensure that all of Detroit has the opportunity to enjoy the Monroe Street Drive-In Powered By Emagine and other “Decked Out Detroit” opportunities at a discounted price.

“It is an absolute honor to be working with the world-class team of professionals at Bedrock Detroit. Being part of the team to showcase movies once again in this historic theater district of Detroit represents a great opportunity for all involved. Providing guests with an exemplary out-of-home movie-going experience has always been our objective at Emagine and now we can further that mission at the Monroe Street Drive-In.” added Paul Glantz, Co-Founder/Chairman of Emagine Entertainment.

Tickets will cost $20 per vehicle and will be available in the coming days at emagine-entertainment.com. Tickets can also be purchased in-person at the Monroe Street Drive-In Powered By Emagine when gates open at 6 p.m. starting on opening day. Movies and showtimes will be released ahead of time, on a weekly basis.

All showtimes and programming will be managed by Emagine Entertainment and the site will include parking for up to 65 vehicles including outdoor seating, pedestrian paths, concession pavilions and lighting, and warming areas. Here is the current lineup:

To keep the city of Detroit safe, the latest COVID-19 health and safety regulations will be enforced, including social distancing and mask wearing guidelines while guests are outside of their vehicles.

For more information on Bedrock’s projects in and around they city of Detroit, visit bedrockdetroit.com.