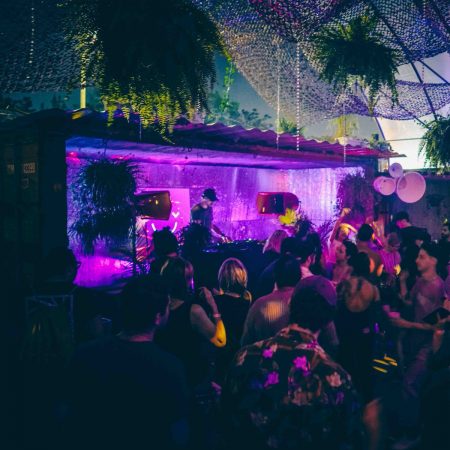 “Nothing good’s happening after the sun goes down.”

That’s a loose quote from my father—a man whose own nightlife adventures lead him to be suspicious of mine. And he did have a point: it is easier to get away with things under the cloak of darkness.

But to be fair, nighttime is also responsible for some of the best things.

Like astrology, great works of art and literature, nearly all memorable musical performances and 70% of every worthwhile dance party ever—97% if you count parties that start at night and go into the afternoon.

In recent history, techno music, and with it the city’s nightlife, has become one of Detroit’s most influential exports and draws. Each year, since 2000, thousands of people have descended upon the city’s Hart Plaza to celebrate electronic music, attracting tourists from across the globe to spill out into the city’s hotels, restaurants, and shops.

This year, Mayor Duggan, once again declared the time around the Movement Electronic Music Festival, May 23-30, Detroit Techno Week.

In this ongoing series, we meet some of the people shaping Detroit’s nighttime culture and economy year-round to get a deeper understanding of what goes on after the sun goes down—and why it matters.

We kick off the conversation with Marble Bar’s Eddie Stefanko and Ted Kristo on origins, ethos and, since we’re in the thick of it, Movement Detroit AKA the busy season for every Detroit night club.

The Marble Bar Was Once the Eagle Bar

“The Detroit Eagle,” recalls Eddie, “used to have a night called the Disco/Secret. Mike Trombley, Scott Zacharias, and some other local DJs would play disco on Sunday nights. It was a dance party that would go until five or six in the morning.”

Eddie grew up bartending around the city, and the Eagle was a convenient spot for industry folks who worked well past last call. He went a handful of times, started moving around and forgot about it.

A few years after leaving Detroit, he found himself in Pittsburgh managing a few bars and looking to open one of his own with a friend. The problem was real estate prices increasing faster than they could save money, so he started looking back home.

Word spread he was on the hunt for a space and his friend, and now business partner, Raphael Blake, hit him up about the Eagle. It was for sale—and cheap. Plus, it came with a liquor license.

The two, along with their third partner, Garrett Ragsdale, bought the building.

That was seven years ago. It’s been four since they’ve opened it.

The partners took their time with the renovation, taking it piece by piece, as time and money permitted—”let’s all pitch in a little bit of money and redo the plumbing.” They did it themselves. Without loans or outside investors.

Perhaps that’s the key to its charm. Last year brought a new patio. This year a new sound system. It’s a neighborhood bar and nightclub, attracting international DJs as easily as locals. It’s a space where you can feel the time and energy human hands have put into its care.

One Piece at a Time

This is Eddie’s first bar, but it’s not his first-time building one. He’s managed other concepts from inception through construction and has worked every position in a bar from door-person to bartender. He’s devoted his entire life to the nightlife scene.

He came up working at the established local bar/music venues—The Magic Stick, Saint Andrews, State Theatre. These days he acts as Marble Bar’s General Manager, more out of love than necessity.

Marble has an active schedule of weekly performances, hosting a mix of DJs and live bands. Programing is curated by all three partners in collaboration with booking manager, Ted Krisko, whose resume in the music scene boasts over twenty years experience and everything from producing shows to running a record label.

My conversation with Ted and Eddie took place in Marble Hours the week before Movement, between loading in cases of sound water and preparing for an all-staff meeting. This interview has been edited. Ask them about the time they forgot to spike the punch.

CV Henriette: Tell us more about your programming

Even if it’s different music on a regular basis, our clientele knows that they’re not going to walk in and find some EDM DubSpace party with people hula-hooping in the middle of the club or some strange kiddy band rental which you might at a traditional venue.

We try to keep the atmosphere on the same level so that people feel comfortable coming on a night when perhaps they don’t know anything about the band or the music.

CVh: Would you say the programming is a natural result of your tastes?

Ted Krisko: Growing up in Detroit, in some ways, there was just one crowd. It didn’t matter if it was a metal band or punk band or a hip hop show or a rave, there’s a lot of ubiquity in Detroit when you grow up here. Shit’s either cutting edge or cool and has some sort of cult appeal or intrigue or it’s something that people who have an eye or an ear for the underground will likely evade.

It’s a city that’s made for two million people, with around 700,000 residents and an even lower number of people living here and going out, you feel a sense of familiarity between all sorts of genres and events.

You still see people that you grew up with at shows, regardless of the kind of music. In Detroit, if something has any aspect of alternative reach, there’s an alternative crowd that’s hungry for it.

CVh: We’re approaching Movement. How has this shaped your business and perspective over the years?

TK: It’s the peak season. Everything ramps up to this time of year and falls off a cliff after, while the whole city recovers. There are places that close the weekend following Movement because of the exhaustion level of the staff and the depletion of inventory.

It’s a booming time to be involved with a club. We start the planning process early. Not too long after the festival, we start booking for the following year.

TK: Curating lineups can be challenging this time of year because it’s when the European festival season is getting started. The number of people who are committed to things far in advance, on the other side of the world, puts talent at a premium.

We’ve had artists during Movement who we’ve flown away from their European tour schedule for a one-off—just to play one show.

CVh: Has your experience with the club given you a new appreciation for electronic music?

ES: Coming out of the punk rock and metal scene, I was familiar with electronic music, but it wasn’t something I sought out. I wasn’t knowledgeable about very many artists.

When we first opened the doors, the majority of shows I was personally booking were more rock-oriented—live bands, live touring acts. But we’ve come to a time now where it’s difficult to make money off live touring bands.

When someone is coming and playing records or music electronically, they’re able to just hop on a plane for one night and go home. These bands have one tour that is announced to everyone in the country that has anything to do with the music scene, so you’re competing with every single person that knows about this tour.

Not that it’s not competitive to get these electronic acts, it is, but it’s not an announced tour.

What I like is the ability to shape the experience—with a touring band, on tour with three other bands, you’re forced to present a boxed-up show to the people. Whereas when you make the calls and book the artists yourself, you get to form the opening acts…

TK: And the art! You get to control your own advertising and marketing.

ES: Yes! We create all the art in-house or sub-contract it out to other local artists. Everything from the decorations to the posters to the lighting to the music to the acts—it’s all thought about in advance. It feels good when something comes out a success, and you’ve curated the experience from start to finish.

CVh: And the festival itself?

ES: The first year here was a great party, but it was a huge learning experience—going into something of that magnitude and scale, having never done it before. I remember in the beginning running around like crazy, being so overwhelmed with the amount of work and things that needed my care during the festival and feeling so wiped out from it.

Whereas last year I was having these moments of running from one end of the room to the other and realizing that everything is ok. We’ve put systems in place, and you learn from each subsequent year.

It’s going to be fun to go at it again now with as much as we’ve improved this place, from a brand-new sound system we’re unveiling at the festival this year to the expansion and the building of the patio.

Every year we’ve done some sort of upgrade to the space. For us it’s exciting to watch it grow.