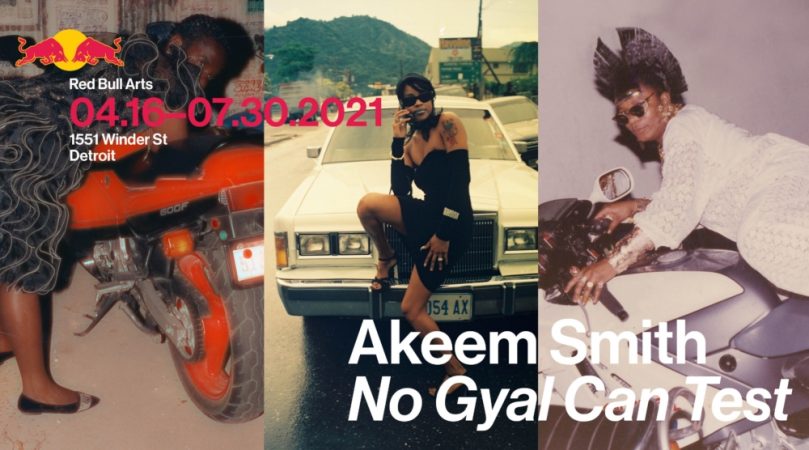 Following a debut in New York, an expanded presentation of Akeem Smith’s solo exhibition No Gyal Can Test will travel to Red Bull Arts Detroit from April 16 to July 30

For his Detroit presentation of No Gyal Can Test, Akeem Smith will debut new sculptures and site-specific video and audio installations, and develop a series of virtual and public programs. 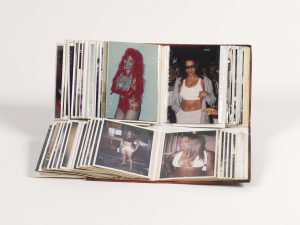 “Like Kingston’s dancehall community, Detroit is home to an important locus of culture within the global Black diaspora,” said Smith in a press release by Red Bull “I’m excited to see how the exhibition’s themes of community, site-specificity, and transformation through music and style reverberate in a city shaped by such deep-rooted, parallel histories of economic disenfranchisement and subcultural abundance.”

Smith’s extensive, traveling exhibition traverses the slippages between memory, the archive, and history, excavating the personal photographs and videos entrusted to the artist over the past decade by various family members, friends, and pivotal figures of Kingston’s dancehall community.

The exhibit indeed uses real-life visuals of his experience growing up between New York City and Jamaica in the 1990s, from his collection of photographs and VHS tapes given to him by his family and friends.

The artist’s archive represents his familial network and inheritance as the heir apparent to the OUCH Crew—the legendary six-woman crew and fashion house, led by Smith’s aunt, that helped define dancehall aesthetics through their styling work and innumerable one-off designs.

Drawing upon his experience growing up between New York and Jamaica, Smith harmonizes disparate elements from this extensive archival documentation, which chronicles this seminal era from the early 80s through y2k, conjuring a collective memory that otherwise would have only existed on the threshold of the artist’s own. 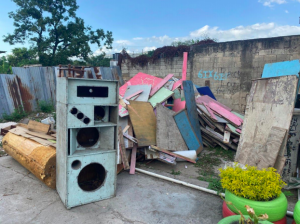 WATERHOUSE DISTRICT, KINGSTON, JAMAICA. TAKEN DURING THE ARTIST’S TRIP TO JAMAICA IN 2021

Part poem, part anthropological homage, No Gyal Can Test forms a layered exploration of spectral coloniality, diaspora, and the voyeurism that results from transposing these artifacts of a still-active community across cultural, economic, and temporal divides, according to the Red Bull Detroit.

In advance of the exhibition’s second iteration, Smith has returned to Kingston to expand his archive of building materials and ephemera rooted in historic sites within the dancehall scene that have since been abandoned or fallen into disrepair.

For the Detroit iteration of No Gyal Can Test, Smith will present a newly commissioned, monumental work entitled Veranda (2021), which consists of a towering stack of speakers encased in an ornate sheath of decorative wrought iron. A monumental symbol often associated with the boisterous, predominantly male musicians of dancehall, Smith transforms the speakers here into a quiet conduit for fragments of historical analysis read by dancehall icon Ninjaman. 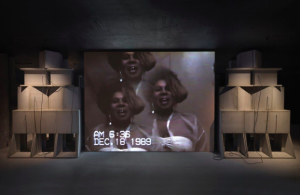 To make this exhibit unique, Smith will develop a series of virtual programs for his Detroit presentation, including Dancehall Diaries, an intimate conversation between a group of dancehall luminaries featured prominently in the exhibition who have not all been together in over two decades: Sandra Lee, Paula Ouch, Debbie Ouch, and the original Dancehall Queen, Carlene.

Rooted in the age-old tradition of oral history, this filmed reunion creates space to retell the history of dancehall with its women positioned at its center. The women gathered here to reflect on their early years in the dancehall of the late 80s and 90s, how the culture has changed, and how their visionary sense of style and approach to life has contributed to the island’s evolving cultural legacy.

Additional programs include Slack Archives, a roundtable conversation intended to draw out themes connected to Smith’s extensive archive documenting the women of dancehall with a conversation that reveals the archive to be a space through which both visibility is cemented within the historical record and fictions are produced.

Smith is joined in conversation by his aunt Paula Ouch, who founded the Ouch Crew fashion collective, and whose collection was one of the initial building blocks of Smith’s archive; the art historian Kirsta Thompson; and the archivist Dorothy Berry; moderated by critic and historian Elleza Kelley.