After a Successful Career in New York, Chef Jared Gadbaw Opened His Contemporary Italian Restaurant in Detroit, in September 2020 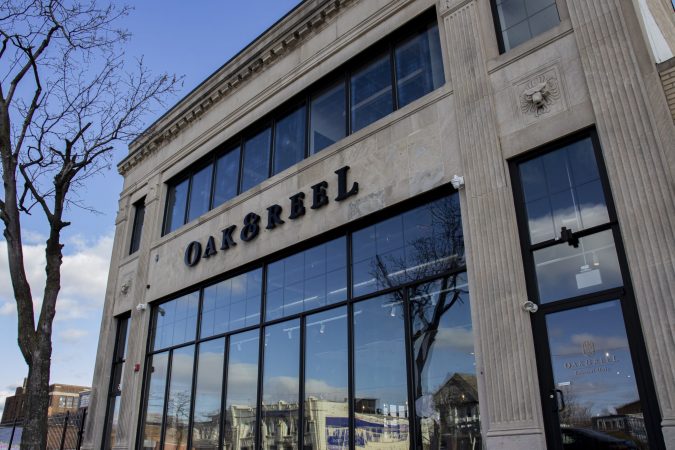 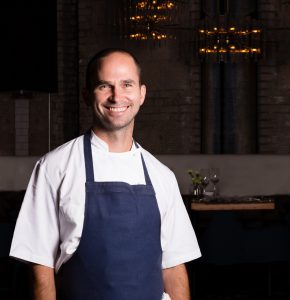 Situated along Grand Blvd. in the historic Milwaukee Junction neighborhood, Oak & Reel is a contemporary Italian restaurant primarily focusing on seafood. An eye-catching space on the outside with stone pillars and large windows, when entering, one is met with artistic light fixtures, a beautifully laid out bar, and an open wood-burning flame grilling the night’s perfections.

Opened in September 2020, the restaurant is the brainchild of Michelin star-earning chef Jared Gadbaw, who returned to Detroit in 2018 after an almost two-decade career in New York. Born in Garden City, Gadbaw obtained an undergrad degree from Michigan State University before deciding to head to the Big Apple to study culinary at the French Culinary Institute — now known as The International Culinary Center.

Applying for a chance job listing on Craigslist, Gadbaw met Chef Michael White, who then hired him as sous-chef for his NYC-based Italian restaurant Alto. Later, being asked to help open a seafood restaurant that could rival New York’s titans of Seafood, he became chef de cuisine at Marea, where he would earn the high-end restaurant two Michelin stars.

THE CONCEPT BEHIND OAK & REEL 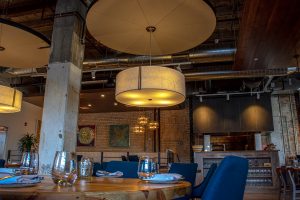 Traveling around the globe and opening a few other restaurants for Chef White’s group before returning to Detroit in 2018, Gadbaw drew inspiration from his past for the idea of Oak & Reel. Specializing in Italian seafood, he shared that he wanted to create an atmosphere in Oak & Reel where people could celebrate just about any occasion, from a laid-back casual event to a formal dinner.

“I want to bring my experience in New York to Detroit,” shared Gadbaw while discussing the idea for Oak & Reel. “It’s almost 9000 square foot space, so the way we built it is a way that it can be broken into almost sections, where you could have more formal dining in the back of the dining room or informal dining in the front and then a big bar and lounge area. So I really wanted it to be a place where everybody could come and enjoy whatever celebration or daily nourishment that they desired.” 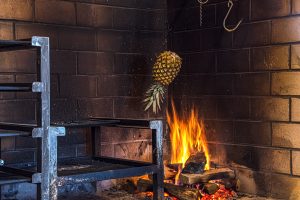 A PINEAPPLE ABOVE A WOOD BURNING FIRE INSIDE OAK & REEL. PHOTO JOHN BOZICK

“For me, the most important part is that I want each of those experiences to be the best possible. I don’t want to take shortcuts; I want the service to be at a level that supports the food and the food to be at the level that supports the wine. I really want to be a grown-up restaurant that knows its business and is in the business f creating memories and making people happy,” he added.

Serving up a wide variety of eats that range from snapper, prawns, and trout to pasta such as gnocchi and rigatoni, Oak & Reel presents a menu that may not typically be a part of a Michigander’s diet, something that adds to the unique quality of the restaurant.

WORKING WITH HIS DETROIT COMMUNITY

While returning to the Metro Detroit area was always part of his plan, Gadaw was drawn to Detroit by the community that makes the city what it is. Surrounded by skyscrapers and concrete, New York is the city that is good while you’re young. But, after spending over a decade there, as Gadbaw put it, he was hoping to head somewhere where he could see grass again while also being part of a community. 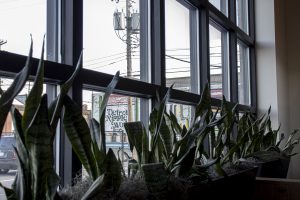 “I really wanted to be a part of a community I have these visions of, working with the local. The Urban Farming Initiative is across the street from us, I’m having them grow vegetables for us and we throw a party for them every year,” shared Gadbaw while discussing the community around Oak & Reel. “I want to do some good for a community and not be surrounded by tall buildings like I was in New York. I wanted to look out and be able to see grass, see a neighborhood, be a part of where people live and play and I saw Milwaukee junction as that.”

Bringing up raising young children and family life in the busy city that is NYC, Gadbaw also added, “I wanted to come back and make something for ourselves something special here in Detroit.”

STARTING OUT AMID A GLOBAL PANDEMIC

Officially opening Oak & Reel in September, the ongoing pandemic worried Gadbaw when it hit last March, as the eatery had yet to open its doors before Michigan began to lockdown. Working with his wife and a single manager, Gadbaw made do with what he could, reformatting his website to sell provisions, running ads on social and marching forward the best that he could. 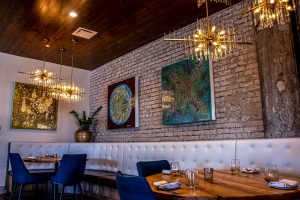 “It wasn’t always easy and when the second closure happened, we tried to pivot again and now we’re constantly pivoting with each restriction lifted or imposed,” he shared. “It’s just a new business model one after another and it’s been a challenge.”

Closing in 2020 from September through the 17th of November, Oak & Reel opened with holiday offerings and limited staff. Like many eateries in and around Detroit, the months before the resumption of in-person dining were not easy, with Gadbaw and his limited staff hustling the best they could.

“We would do everything internally. We moved to these provision offerings, which were intended to be two meals for two people. Fresh fish, fresh pasta sauces, prepared sides, things that people could cook for themselves in their home for 10 minutes or less,” added Gadbaw. “I was doing all the prep; I was personally hand-delivering all the deliveries and just tried to keep the lights on as best we could until we were able to reopen again in February.”

While indoor dining resumed in February, traffic has remained slow for many eateries. However, Gadbaw is still optimistic about the culinary industry’s future, believing that some aspects like curbside and outdoor dining will remain for the future.

“I’m optimistic about dining in Detroit. I’m certainly saddened to hear about the spaces that didn’t make it, but I think we’re a resilient bunch and I think we probably all learned how to really tighten our belts a bit this year and hopefully insulate ourselves for the future.”

As far as advice for future chefs and culinary experts, Gadbaw shared that patience is key in the industry while also realizing that failure does happen. Passion is also key and realizing the demand from the field will also help someone do better day-today. 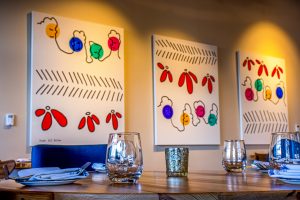 “Patience is something that is difficult, I think, in this career. Everybody wants to come out of college or school and be a chef and run places,” Gadbaw shared. “I think that in order to do something really well, especially in this industry where there’s so much failure, the patience not to rush into things and to think of it as a career, instead of a job is and always has been my advice.”

Oak & Reel is open from 5 pm to 10 pm Thursday through Sunday with ever-changing menu options. Be sure to check them out online or on social media to set up reservations, see the menu offerings or purchase a provision box.