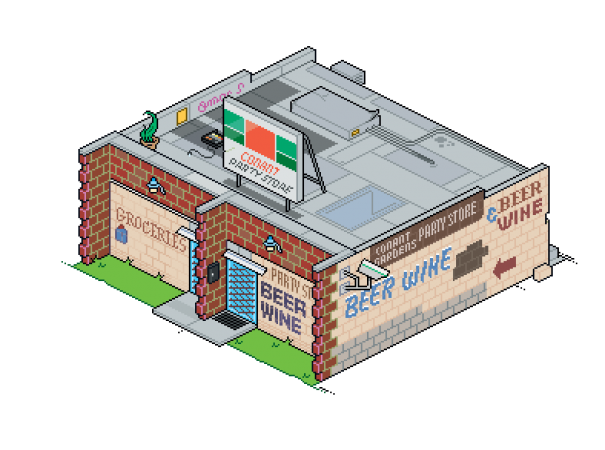 Thinking virtually these days? Red Bull Arts Detroit kicked off the Omar S: Conant Gardens Party Store, last week. The exploration of the particular interests and passions of the legendary, elusive electronic musician, DJ, and producer, Omar S, is comprised of interactive, virtual exploration of his personal collection, which ranges from arcade games, records, to vintage VHS tapes, as well as a physical installation with limited-edition drops. The exhibition maps the esoteric personal creative landscape of Omar S and the expansive forces that coalesced to form his singular style.

As a Detroit native born and raised in the Conant Gardens neighborhood of the city, Omar S (real name Alexander Omar Smith) is noted for his raw, stripped-back approach to both creating, releasing, and marketing his music, and whose enigmatic, prolific output has cemented him as a local legend with international prominence. While associated with the genres of Detroit techno and house, he has historically resisted the inclinations of media to categorize or define him and is known for maintaining a fiercely independent, low-key public profile despite having released critically acclaimed and provocative albums and singles.

Originally funding the production and distribution of his music through his day job at Ford Motor Company, he has self-released most of his music through his label FXHE Records Detroit, rarely working with other labels and keeping his list of collaborators close. According to the press release, Smith has alluded to the reason behind the decision, saying, “I don’t have a good relationship with a lot of distributors. So why waste money?”

Omar S: Conant Gardens Party Store offers an unprecedented look into the universe of an artist who seldom discusses historical influences, and has often presented his work as strictly in the present. Drawing from his own eclectic personal collection, the exhibition features two interpretive, immersive recreations of the eponymous “party store”—Michigan slang for a small neighborhood convenience store—where the artist spent his formative years. Owned by Omar S’ family since the 1950s, the store housed a number of classic arcade games and pinball machines, some of which Omar S still owns. In addition to introducing the artist to gaming, it also led to his interest in collecting—not only arcade games, but also cartridge video games, memorabilia, records, VHS tapes, synthesizers, drum machines, cars, and more. Now in the artist’s ownership, the space serves as the headquarters for his FXHE imprint.

Originally conceived as a physical exhibition, Omar S: Conant Gardens Party Store now lives online as an interactive web environment where users can explore the store and its contents, watch videos, listen to original music, and more. This virtual exhibition highlights numerous elements selected from the artist’s personal archive including his collection of obscure arcade games—some modified by the artist with custom components and sound effects—films, vinyl records, cartridge video games, Detroit music memorabilia, and related paraphernalia that inspired him.