2020 Roundup: Over 200 Days of Protests and Still Going Strong 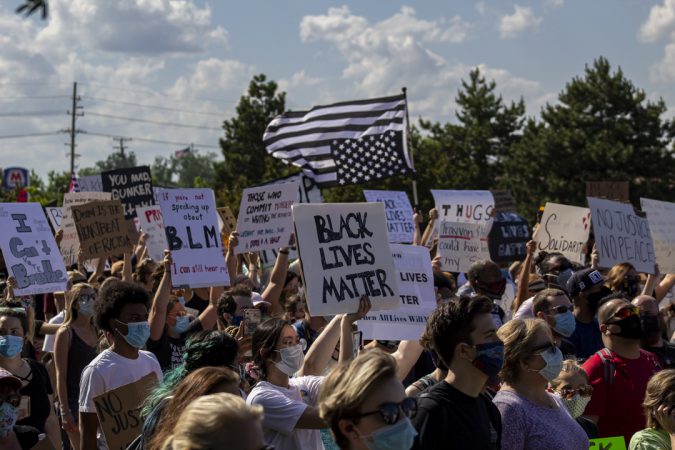 The cameras may have turned away and nightly news coverage shifted back onto other matters, but after over 200 days of demonstration, the Black Lives Matter and anti-police violence protests are still ever-present. While the onset of winter and a rise in COVID-19 cases has changed the nature of how protesting works in some cities, as we head into 2021, it’s crucial that we don’t forget the protest movement that erupted over the summer and the fact that justice has yet to be served for so many.

On May 25, George Floyd was killed by Minneapolis Police Officer Derek Chauvin, triggering protests across the country and world. The protests also brought into the mainstream the killing of other individuals by police; figures such as Breonna Taylor, in March, and Elijah McClain, in 2019, were just two of the many individuals whose names became rallying cries in the fight against racial injustice, police violence, and a broken criminal justice system.

Black Lives Matter, the Movement for Black Lives, and other groups fighting for justice called to Defund the Police, instead proposing to use the millions spent on military gear for police on community development and non-punitive criminal justice matter.

Yet, while some spent their summer at a demonstration or two, reading relevant literature and donating the bail funds, the scenes of unrest had disappeared from the mainstream news by August. A summer that saw tear gas fired unprovoked at demonstrators, journalists attacked by members of the law, the coming together of countless community members, and crowds numbering in the thousands shutting down cities across the nation seemed to disappear into history as more and more people began focusing on the election.

Yet, protests did not stop when the cameras shut off; they continued peacefully, well-organized, and ready to keep moving. In Detroit, Detroit Will Breath, a group formed on the streets amid the early days of demonstration, just passed its 200th day of “marching” with a car caravan at the Rosa Parks Transit Center. 200 days of calls to defund the bloated, overfunded, and overly militarized police departments in cities like Detroit, of fighting for racial justice and bringing an end to a destructive, violent system of criminal justice.

With so much happening, from the still raging pandemic, to the worsening economic situation, to whatever is happening with Donald Trump, Joe Biden, and the still ever-present election, the protests around police violence and racial injustice may seem like the latest out of the ordinary event to happen during the longest year in remembrance for many people, but it shouldn’t.

Heading into 2021, it’s important to remember that Defund the Police is not some trendy catchphrase and that the goals and demands of the 2020 protests still have yet to be met. The trial of Derek Chauvin remains open, George Floyd, Breona Taylor, and so many others have yet to see justice and police departments remain militarized, violent and over-funded compared to other aspects of communities across the country. Protesters are still met with an unjust amount of force, whereas literal Nazis, Proud Boys, and militia members, whose protests sometimes turn violent from their own doing, march freely and sometimes with police.

In 2021, support for the movement must continue until there is real change and justice is served. Things did not and will not improve just because Biden is president, as he has already stoked fears of anarchists while calling to shoot protesters in the legs, two examples showing that he will need to be more than pushed if the demands of those demonstrating are to be even remotely taken into account.

Most importantly, in 2021, this idea of solidarity and community that has been formed by groups like Detroit Will Breath must continue and can be learned from. One example of this is when disgusting Tweets from Shelby Township Police chief Robert J. Shelide sparked protests in Macomb County by groups like SHIFT Michigan and AMA Protest, those already marching in Detroit and Wayne County joined the fight in calling for Shelide’s removal, linking activists from countless demographics and backgrounds across the Metro Detroit Region.

The same type of action has been seen across Michigan, the country, and the world in the face of injustice and it needs to continue in the years ahead.

The issues of 2020 will not disappear overnight and even after COVID hopefully disappears, matters like police violence will exist and justice for so many will still need to be served. In 2021, let the fight for justice continue until the voice of the people is heard in the highest halls of government. Let the protests of 2020 inspire change and goodwill in all who played even the simplest part.