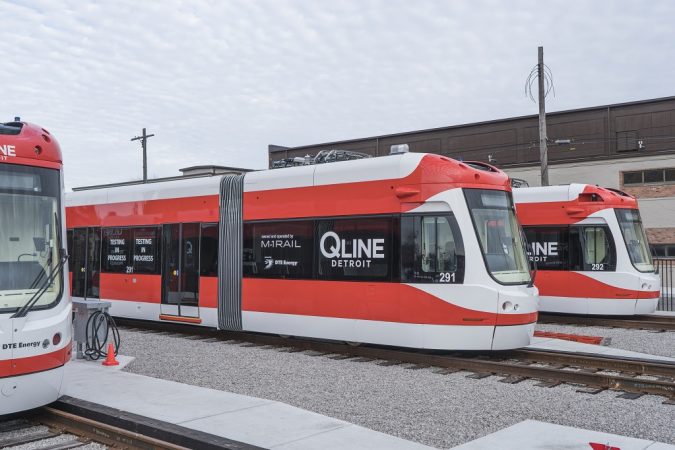 Last March, the normalcy of life from in-person work at the office, restaurant dining, and transit methods like riding the bus were disrupted thanks to the advent of the COVID-19 pandemic. A year later, as the number of new cases remains above where they were a year ago, small semblances of pre-COVID life are beginning to resume.

Looking to transit in Detroit, the shutdowns of last year are no longer the case and while fare collection is set to resume for busses, other aspects like the shuttered QLine are not set to return until the summer months.

To help clear the air around questions regarding riding the bus, hopping on the People Mover, or taking the QLine up and down Woodward again, let’s take a look at the stat of transit in Detroit a year after the lockdown began.

Bus fare collection is returning soon. You can purchase your passes ahead of time at 301 E. Warren and the Rosa Parks Transit Center. As a reminder, you can also buy passes on your phone with the Dart app. No matter how you pay, remember that a mask is required to ride. pic.twitter.com/j1tHSSKIWh

Detroit’s system of busses faced struggles last March, halting some morning bus routes due to a driver shortage, as well as concerns around the number of people on a bus at a given time. The danger faced by DDOT drivers also became all the more apparent after driver Jason Hargrove died of COVID-19 after posting a viral video in which he expressed concern for his safety being around maskless and coughing passengers.

Following the incident, changes came to the bus system, as passengers were now required to enter and exit from the bus’s rear, while the first few rows behind the driver remained empty. Mayor Mike Duggan also announced that DDOT would no longer charge fares for the duration of the pandemic and masks would be provided to anyone seeking to board a bus without one.

Starting March 15, some of these measures will change, as fare collection will resume March 15 with extra safety measures in place. While the passenger load will be raised to around 20 people per bus — and 26 passengers on an articulated bus — they are advised to remain at least 6-feet away from the driver. Busses will also be fitted with hand sanitizer, which is recommended to be used as one enters the bus.

This resumption of fares will see the continued use of cash or the DART app allowed for payment. Customers can purchase passes in person at the Rosa Parks Transit Center at 360 Michigan Avenue in Downtown Detroit.

For those with questions or concerns, the city advises anyone to contact DDOT Customer Service at 313-933-1300, Monday-Friday from 6 am to 6 pm.

Fares are being reinstated on March 15th. Pay safely when you pay with Dart. Learn how: https://t.co/6SfavcTPYl

The SMART transit system that mainly serves Detroit’s suburbs was in a similar boat as DDOT last year. Fares were waived to reduce contact with drivers, while passengers were required to board from the vehicles’ rear. Ridership was slated to have dropped 80 percent, leading to reduced routes similar to what was seen with DDOT.

Like its sister service in Detroit, SMART will also resume fare collection on March 15, with the same parameters as DDOT. Cash and DART will be accepted and social distancing and mask use will be strictly enforced. Just as DDOT did at the end of 2020, temporary shields are being installed to help protect drivers from passengers and hand sanitizer dispensers are present on all busses. The number of transit riders will also be the same, with 20 people per standard bus and 26 on an articulated one.

For more info, smartbus.org is the best resource.

Lastly, Detroit’s QLine and People Mover transit systems are expected to remain closed for a little while longer. While the People Mover has yet to set a date for reopening and has remained closed, the QLine announced that service would begin again in late-summer, with M-1 RAIL operations moving in-house following the end of their partnership with Transdev North America.

The summer return of the QLine will be aided by $1.3 million in federal funding from the CARES Act and prices for riding have yet to be updated. More information is expected to become available once the summer months begin to draw near.