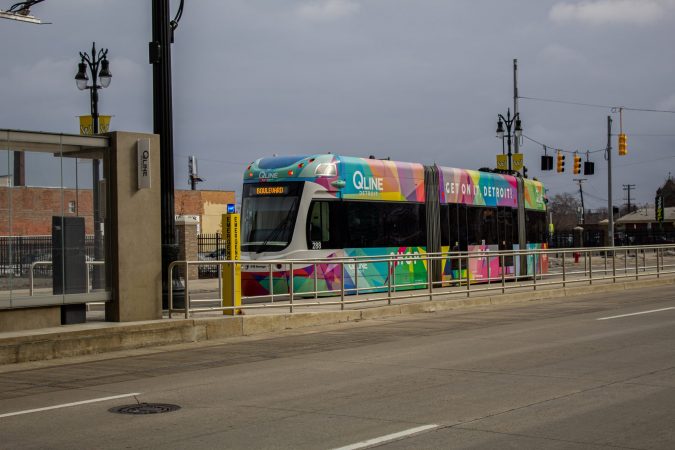 The talk was supported by TechTown Detroit and was hosted by Transportation Riders United, a grassroots organization of individuals committed to ensuring that everyone can get where they need to go regardless of if they can drive or not. The group’s mission is to improve public transit in order to restore “urban vitality, ensure transportation equity and improve quality of life.”

THE STATE OF PUBLIC TRANSIT IN METRO DETROIT?

The evening of discussion started with an opening statement by each panelist, followed by a period of questions and answers about what’s going on with public transit in Metro Detroit. One of the main points stressed by those on the panel was that they are working toward issues despite political gridlock concerning the funding and development of transit in Lansing.

“In the last couple years, so much work has been done in trying to create a framework of an actual transit plan. The reason you haven’t seen it is because the politicians have blocked its ability to get out to you,” said Warren Evans during the start of his short speech before the panel, “We haven’t been asleep at the wheel, we just haven’t gotten over that threshold where we can sit and share. As they said, we need to hear from you because advocacy groups are always the ones that will help sharpen what were trying to do along with making sure we’re proving the level of service in areas that want it.” 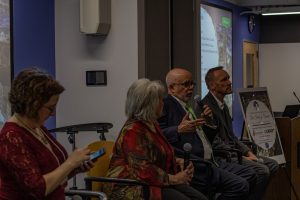 A pivotal step to assuring that the proper establishment of public transit in Metro Detroit is accomplished lies with amendments to the Municipal Partnership Act under House Bill 5229 in the Michigan Legislature. The bill would make the job of establishing a regional transit plan easier for Metro Detroit, by modifying the Municipal Partnership Act and making it easier for the counties that want regional transit to work together. In this case, it would mean the counties of Oakland, Wayne and Washtenaw collaborating to create more efficient bus lanes and routes, better access to existing infrastructure for public transit in Metro Detroit and the eventual expansion of what is in place.

While much of the panel involved talking about the tenacity of passing House Bill 5229, the county leaders did take questions from those in the audience. One question that came up was whether or not better options for public transit in Metro Detroit would be expanded on for older adults under a new regional plan.

When addressing the question Coulter commented, “The population is getting older. Right now, in my county, Oakland County, the senior population is about 15% of the population, and by 2045 It’s going to be 25% of the population. This is what we’ve been calling the silver tsunami that’s coming, and we’re not really prepared for. It’s going to be housing it’s going to be access to healthcare, and transportation is going to be a huge component of that because we know that mobility options keep seniors in their homes longer and help them have a quality of life that they deserve. So transit is a huge component to addressing the future and growing health needs of our seniors.”

Another matter brought up was about the potential for a light rail system and whether there would be an expansion to the 3.3-mile-long streetcar or an investment in a light rail system for the region. While Alma Wheeler Smith commented that there would be a possibility of a dedicated rail line between Ann Arbor and Detroit in the future, the investment would take time. Coulter mentioned that dedicated bus lanes would be something that’s more likely to happen due to lower costs and easier implementation processes.

“I think we’re talking initially about a Bus Rapid Transit System [BRT] for a number of reasons. Number one, you can build nine miles of BRT, as it’s called, for one mile of light rail. So it’s far cheaper and far more efficient If you have dedicated lanes, not like the QLINE or buses that get stuck in traffic, but buses that are timed with the lights so that they go fast,” “shared Coulter, “Most communities in the last decade that have invested in transit, have done it in bus rapid transit, and it’s because it’s just as quick as is light rail, it’s cheaper, and it has all the amenities, and you can still have the Wi-Fi and the great experience, but in a far less cost.”

At the end of the panel, the message was clear from the three-county leaders until House Bill 5229 passes, and there are amendments to the Municipal Partnership Act, it will be harder to implement a regional transit plan correctly. In an effort to make their voices heard, Transportation Riders United sent postcards signed by attendees to the Michigan Legislature expressing support and urging them to pass Bill 5229.

THE FUTURE OF DDOT AND SMART

Speaking after the county leaders were Angelica Jones of the Detroit Department of Transportation and Robert Cramer of SMART, both of whom remained positive about the two respective bus services under a new regional plan. The two talked briefly about the recently implemented DART App that allows for the purchase of a transit pass and other transit options from your mobile device.

New route implementations were touched on by Cramer, such as the splitting of Telegraph road into two routes, as well as the future implementation of a FAST bus route on Van Dyke Avenue. He also touched on the existing 160 bus route and how it will no longer be connecting with the Dingle Transit Center.

Absent from most of the talk, Macomb County transportation challenges was also touched on. The county will also be seeing some changes to its existing routes. As Cramer shared, a future park and ride route along I-94 Highway is planned for the future, and a new small zone transit service that will be similar to a rideshare program was talked about and would see implementation along M-59. 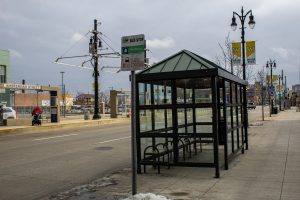 On the DDOT side of things, one question brought up was about the previously used texting service to keep track of route arrival and departure times. While the texting service is no longer available, Angelica Jones did say DDOT will be implementing a new app in the coming weeks that will work with Clever Devices to accurately track busses. By using Clever, DDOT’s planned app would be able to track existing routes and better communicate changes in service with riders.

“In the next few weeks, we will roll out a new app. But right now we’re asking everyone to use to the Transit App to be able to track their bus and with that current system,” said Jones. “So once Clever is on board, we will be able to not only track your bus and get real-time information but if you signed up with DDOT you will be able to see new texts and it will be able to alert you what’s going on with a particular route.”

Closing out the last panel both speakers touched on one of the most critical matters affecting DDOT and Smart right now, which is the shortage of drivers. Jones stressed that, while more funding would always be a good thing, an expansion of transportation services would not work as planned if they are unable to hire and retain more bus drivers.

“When you want more service and more funding one limitation we have is retaining drivers, and that is drivers to actually drive the buses because there is a shortage of drivers right now,” said Jones.

Cramer built off of the comments from Jones by adding, “Being able to hire drivers and mechanics is a huge challenge for us [SMART], and we have been cutting trips and cutting runs almost on a daily basis for the last six to 12 months. I’m sure many of you have noticed that from time to time, and it is because of the drivers that we cannot hire and retain them.”

The future is bright for DDOT and SMART despite their hiring concerns, new routes are coming, and existing routes should see improvement as time moves on. While Macomb County has blocked any and all voting for a future RTA from the ballot, the county leaders of Oakland, Washtenaw, and Wayne Counties showed nothing but a commitment to improving public transit in Metro Detroit during their panel.

The future of expanding transit lies with the passing of House Bill 5229. More information about the legislation, the future TRA and Transportation Riders United can be found here.