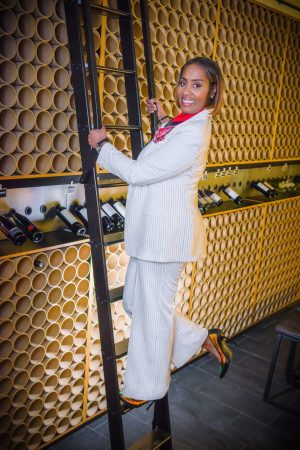 Many of us are fond of wine and the company it brings. A popped bottle of champagne for an anniversary, a deep red pinot paired with a steak fresh off the grill, or a cool, crisp chardonnay at the dinner table. Each has its place and time, but for House of Pure Vin in downtown Detroit, the place and time are here and now.

House of Pure Vin was founded in 2015 by Regina Gaines and two other female founders and is now owned solely by Gaines. When it first opened, it was among only a few resident businesses in the downtown area, and for Gaines, the ever-growing number of new storefronts on her block were and are welcomed.

Gaines has seen many different phases of Detroit throughout her life. She is from Detroit but left to attend Clark Atlanta University, a historically black college in Atlanta Georgia. After graduating with a degree in marketing, she moved back to Detroit and worked for Moet & Chandon as a part of a launch campaign. Gaines made the decision to live downtown, “It was much cheaper to live in downtown than it was to live in Oakland county,” she says.

She explored the industry further and ended up working for both Jack Daniels and Remy Martin as an agent. At the time she co-owned Madison and Vine an agency. Gaines later moved on to own her own tequila line, Tequila Distinguido. She was partnered with the manufacturer and importer. When the economy dipped, she was forced to close the business, just as her daughter was entering school.

Gaines attended Michigan State University and graduated in 2014 with a Master’s in Intellectual Property, Information, and Communication. She attributes the idea for House of Pure Vin to the commute to and from the University. On her route, she passed billboards for the wine country, something she considers an inspiration. Later she found out that Michigan is the number sixth state in wine production and she found herself asking what it would look like to have a wine store in downtown Detroit?

Gaines speaks to the instant consumer base downtown, saying that when she opened House of Pure Vin there were “more people in the office than there were retail and stores.” She refers to these people in the offices as instant consumers because they were in the same area daily, investing in it. She says that once her base was built with people who worked in surrounding offices, she was able to grow her business and branch out with new ideas such as her wine tasting events. Gaines fervently believes that customer connection is key, to not only get the customer into the store once but to get them to come back.

The city’s growth is encouraging to Gaines, but she feels it does have some drawbacks. She mentions how Bedrock, the owner of the building in which House of Pure Vin is located, started with 50 employees, and now employs roughly 500. Regarding both the city and Bedrock, Gaines says, “When you’re growing that fast, people sometimes get left behind.” She continues, honing in on Bedrock, “I think they are committed to getting it right. Do I think they might bump their head a few more times along the way? Absolutely. I do think what Covid-19 has done is to stop the momentum and that can provide for an opportunity to reset and recalibrate and kind of reassess.”

She puts a few hopes on Bedrock, “The objective should be for Bedrock to figure out how to make a movement of us moving forward collectively.”

She elaborates by saying she thinks a committee of downtown business owners should be formed. A round table discussion with business owners and Bedrock employees, working together to find solutions to everyday issues like parking, advertising, and flow of foot traffic.

House of Pure Vin, along with every other business in the downtown area, is still learning and growing. It is changing and adapting to fit better into the lifestyle of downtown. Gaines loves being downtown. “Having a front-row seat, watching it grow,” is the best thing about it, she says. “I’ve never seen my city as vibrant, ever. Detroit is a lifestyle.”

Great things to know about House of Pure Vin: They sell online and ship anywhere in the country. They also have an exciting wine club and great virtual events you can sign up for here.