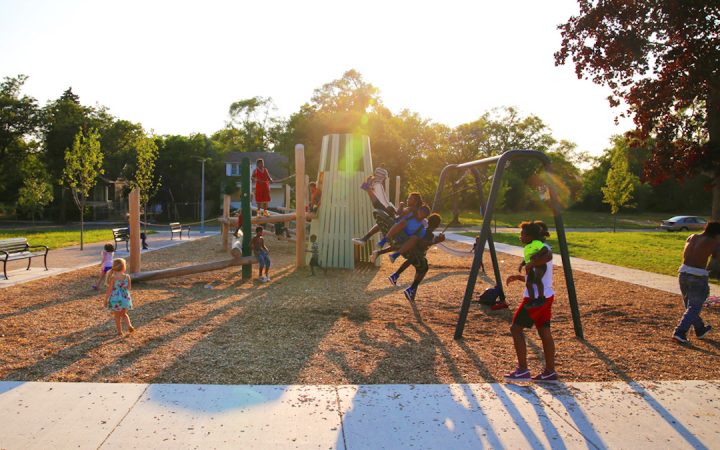 Public spaces in neighborhoods have been found to be vital stimulants for thriving communities. They provide a place to gather, exercise, meet new people, and even spur support for surrounding businesses in the area. As a city on the rise, it seems Detroit knows this to its core.

Here are how four public space projects currently, or will soon, represent and provide stimulation for the Detroit community.

In the early stages of Ella Fitzgerald Park, a project combining the efforts of Reimagining the Civic Commons (RCC) and the city of Detroit, the neighborhood’s needs were closely assessed. The space itself was once individual lots, each holding a house, but now all of the lots have been combined to form a large open space.

This is an interesting dynamic for the community. Since there was no sentimental attachment to any specific layout, the space was free to be used in whatever capacity that suited the neighborhood best. Detroit’s East Region Urban Design Director, Alexa Bush, says, “As we were doing the planning and design of the park, we were actually testing out ideas for what programming might take place [there] in the future.” By designing the park based on what was found to be the neighborhood’s needs, the community was able to benefit as a whole.

Bush brings up an example in a Fitzgerald resident who loves to hula hoop. She makes her own hoops, and prior to the pandemic, she had a decent-sized gathering of people all joining to hoop together as the Hula Hoop Troop. This space that was built with the intention for individuals, who in turn, pushed the community to be more mindful of (and for) itself. 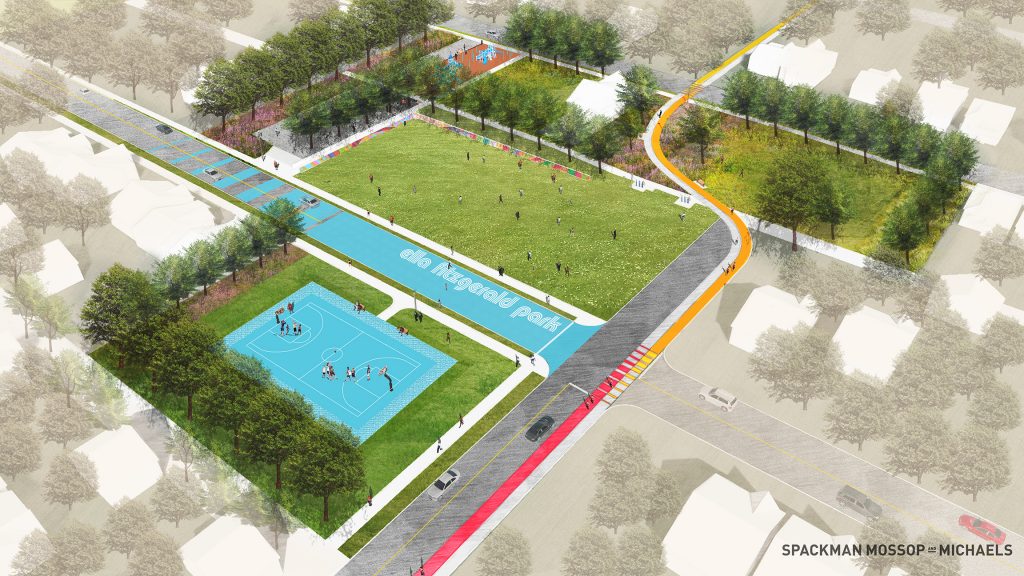 MAKING THE OLD NEW, AND INVESTING IN THE FUTURE

Due to Detroit’s history, it’s quite easy to find an abandoned building or an empty lot anywhere in the city. This provides an interesting dynamic when it comes to public spaces. Even without construction crews and city planners, there are pockets of natural communal space in many neighborhoods. For Ford, the Michigan Central Station seems a natural hub not only for its future but also for innovators, entrepreneurs, startups, and other worldwide partners.

The revitalization of the old Michigan Central Train Station is something that Detroiters old and new can look forward to with a sense of excitement. The hope is that, in turn, the excitement for this redevelopment project will catalyze more developments and opportunities in the area.

Christin Twelftree, a spokeswoman for Ford, speaks about how redevelopment is a community catalyst, “As has been shown by redevelopment projects across the country, a major catalytic project such as this helps spur additional development around the anchor developments and will help bring about a larger resurgence of the surrounding neighborhoods, the City of Detroit and all of Southeast Michigan.”

As well as aiding in motivation for surrounding neighborhoods, there is also a focus on the future of mobility. Ford is ensuring this focus by utilizing Detroit’s connection with it. The Michigan Central plan incorporates numerous platforms, such as pedestrian walkways, tables, benches, and a cafe, to aid in socioeconomic mixing. Inevitably, this will enable the community to connect in a central space and aid in breaking down barriers, both economic and racial. 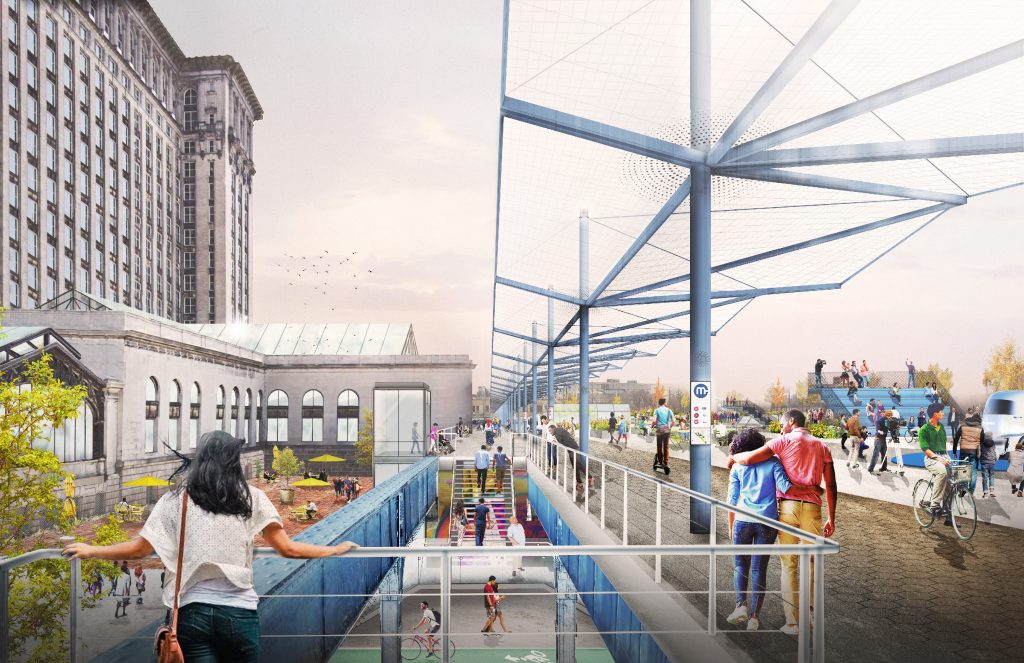 BRINGING PEOPLE TOGETHER THROUGH CULTURAL RE-IMAGINATION

The effects of lessened foot traffic to Detroit due to the Covid-19 pandemic will most likely be lasting beyond a return to “normalcy.” This is a fear many businesses in Detroit have due to hybrid work styles, continued financial instability, and lingering fears about the virus. Developments like the Culture Center Planning Initiative (CCPI) are hoped to serve as a mending connection of the Midtown community through a focus on reimagining the area into communal, cultural spaces.

The Director of Arts and Culture at Midtown Detroit Inc., Annmarie Borucki, puts this idea into her own words, “Attracting visitors back to the city will be a slow process, but the reinvestment in arts and culture will help re-energize the city and encourage visitors to also frequent local restaurants and other retail establishments.”

As for CCPI itself, the plan is to reimagine and unify the cultural district through architecture, landscaping, and technology. This includes the campuses of Wayne State College, College for Creative Studies, The Detroit Institute of Arts, and other surrounding museums. Borucki comments, “…We’re trying to attract visitors from outside the area as well as develop a hub for residents and workers from within.”

This will be a space for college students to collaborate, but also for individuals coming from around the world to create deeper enjoyment of Detroit’s amazing art campus. 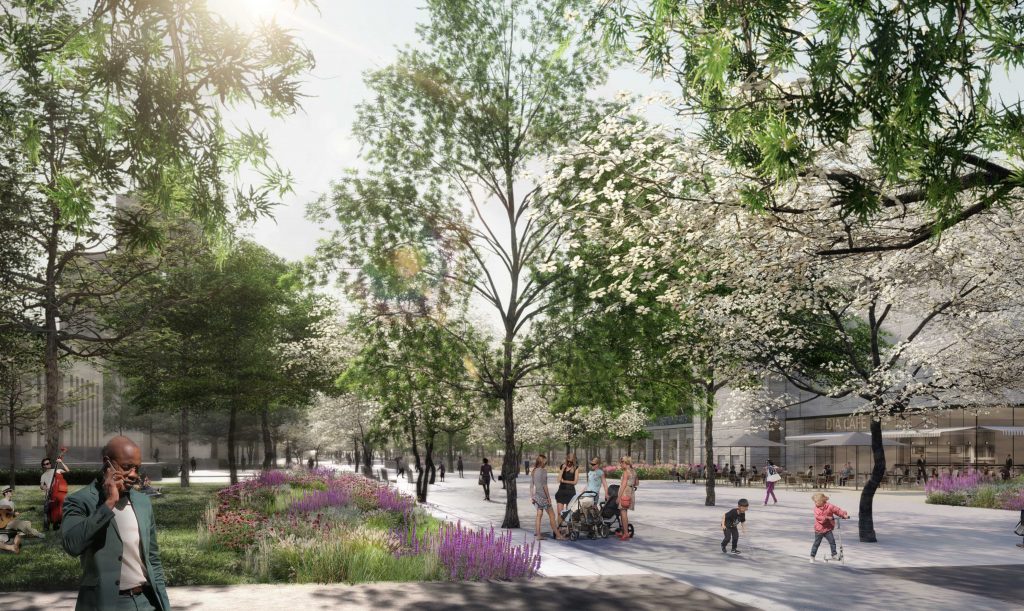 RENDERING CCPI VIEW OF SQUARE WITH THE DIA IN THE BACKGROUND

SPACE TO CHOOSE YOUR OWN ADVENTURE

During the past years, the Detroit Riverfront Conservancy (DRFC) has pinned their attention on the space between the Belle Isle Bridge and the Ambassador bridge. The goal for this stretch of waterfront property is for it to be filled with green spaces and other amenities for the public to enjoy. One specific section is looking to break ground this year, transforming the West Riverfront Park into Ralph C. Wilson Centennial Park.

This park, though it will eventually be an eye-catching destination due to its larger than life Monstrum Playground and water-play elements, is meant to give the community a multipurpose public space. For Marc Pasco, the Director of Communications at DRFC, it is meant to give any visiting individual the opportunity to relax alone, meet up with friends, or even enjoy the park’s large programs. “You can make your visit to the riverfront whatever you want it to be,” he says.

Ralph C. Wilson Centennial Park is of course hoped to attract people from all over, creating traffic for nearby restaurants, shops, and bars. Along with this, the President and CEO of DRFC, Mark Wallace, hopes it will create a lasting effect on the community. “Every public space reflects the community in different ways,” he says, “and the ones that are built well are able to evolve over time as the community changes and evolves.” 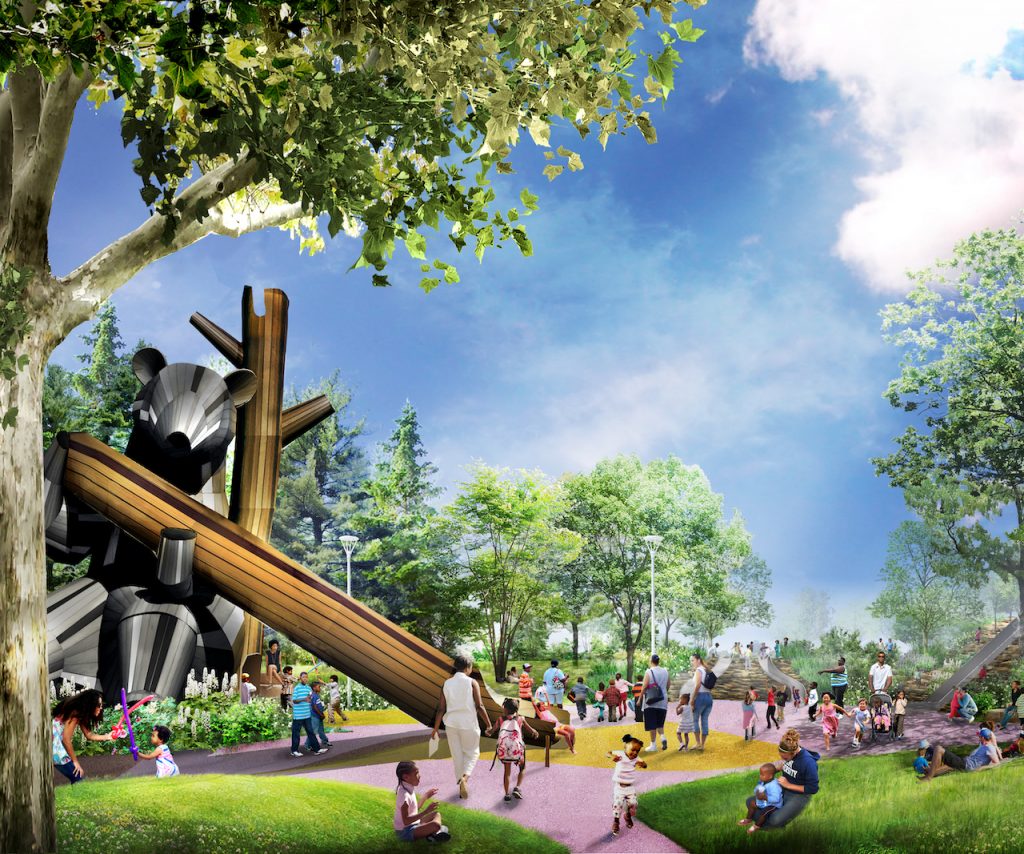 Each of these four development projects has its own specific goals in mind for the surrounding neighborhoods. They are each intended for the area to entice the community, Detroiters and not alike, into communing, creating, collaborating, learning, moving, and thriving.

If there is one thing congruent for all four of these developments, it is the notion that communal hubs are cyclical. When a public space includes something for everyone in a safe and comfortable way, then it will inevitably stimulate itself. A public space begins with the community, circles back to it, and thus continues to push it forward.