A Look Back at History: Michigan Central Train Station

32 Years Ago, Passengers Rolled Out of Detroit’s Train Station for the Last Time, Leaving the Beaux-Arts Style Vacant Until Just a Few Years Ago 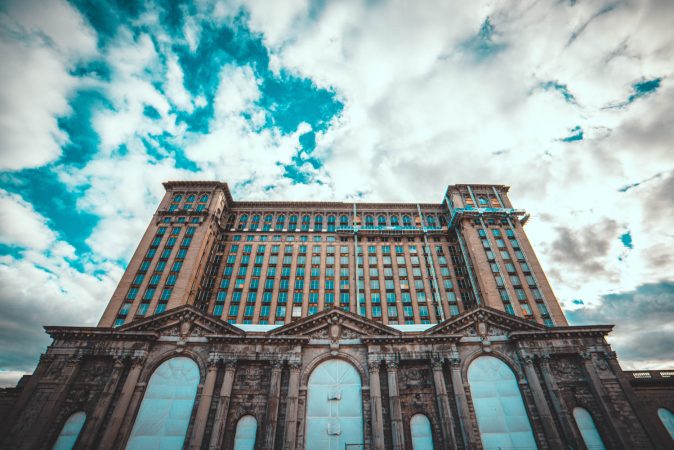 Let’s take a look back at history in Detroit, examining milestones, memorable dates and monumental months, as we connect the city’s one of a kind past with its exciting future.

Looming over Corktown and Roosevelt Park, Michigan Central Station stands as a pillar of history for Detroit, a vestige to the days when this country could still connect states, cities, and people by easy, affordable and accessible rail. Today, the building remains a monument and symbol to Detroit, a building with a history that mirrors the city’s rise and fall and exemplifies the effect the automobile and Detroit had on America’s historic rail system.

January 6 is a day in history that stands out for the old train station, as it marks the date in which 32 years ago, passengers and trains took off from the station for the last time. As is the occasion, there is no better time than now to sit back, relax, and explore the history of one of Detroit’s more iconic structures.

As old a building as it is, the present Michigan Central Station was not the first rail depot in Detroit. For a period from 1884 to 1913, the Michigan Central Railroad operated out of an older Romanesque Revival structure at Third and Jefferson near the present-day site of TCF Arena in Downtown Detroit.

Through the years, as the rail industry grew in tandem with Detroit’s industrial rise, it was eventually decided that a new station was needed. With an underground rail tunnel to Canada completed in 1906, Michigan Central began to purchase land in Detroit’s Corktown neighborhood due to its proximity to the new tunnel. 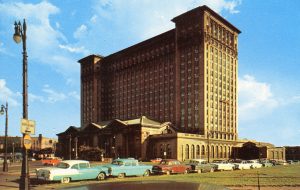 A POSTCARD DEPICTING MICHIGAN CENTRAL STATION, CIRCA 1955. AT ITS PEAK, TRAINS BUSTLED IN AND OUT OF THE STATION AND SERVED APPROXIMATELY 4,000 CUSTOMERS PER DAY. PHOTO DETROIT HISTORICAL SOCIETY

By 1910, around fifty acres in Corktown had been acquired for the future development project and by 1915, the city itself invested $680,619.99 to purchase land. With the city’s purchase, they acquired the land that would come to be Michigan Central Station and the yet to be named Roosevelt Park.

Throughout this period of buying and selling, construction on the Beaux-Arts Style building began in May of 1910 based on the design from architect firms Warren & Wetmore and Reed & Stem and the steel structure was in place by December 1912. The building was set to open on January 4, 1914, but a fire that occurred in the old depot on December 26, 1913, forced Michigan Central Station to open early.

With its completion, Michigan Central Station was hurled into history. By the time of World War I, more than 200 trains were leaving the station each day, with thousands of passengers passing through the marble exterior, mesmerized by the 54½-foot ceilings of the waiting area. By the time of the Second World War in 1940, it was noted that over 4,000 passengers used the station daily.

During its heyday, some notable passengers included the president’s Herbert Hoover, Harry S. Truman and Franklin D. Roosevelt, the actor Charlie Chaplin, the famed inventor Thomas Edison and the artist famed for his court at the Detroit Institue of Arts, Diego Rivera and his then-wife, as well as artistic equal, Frida Kahlo.

Some things do not last and after the war, individual automobile ownership grew, while rail ridership gradually declined. Michigan Central’s parent company, New York Central, tried to sell the station in 1956 and again in 1963, but both endeavors failed. In 1967, with cost of maintenance too high, Michigan Central Station’s restaurant, arcade shops, and main entrance were closed, as well as a good portion of the main waiting area.

In 1971, Amtrak assumed complete operation of rail service across the nation and the main waiting area and entrance were reopened in 1975. But, things did not last and the station met its fate. On January 6, 1988, the last Amtrak train left the station, bringing a new era of ownership and abandonment t Michigan Central Station.

Acquired by Detroit’s own Mr. Burns, Manuel Moroun and Controlled Terminals Inc., the station remained abandoned for years. The train shed was demolished in 2000, while the remaining tracks were converted for freight and turned over to Canadian Pacific Railway. 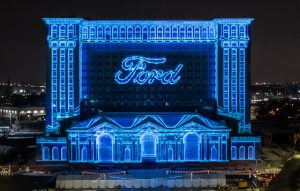 In 2004, there was talk from then-mayor Kwame Kilpatrick about relocating the Detroit Police Department headquarters to the station. Still, again, nothing ever materialized. all the while remaining abandoned, the station became iconic for abandoned building and ruin photography.

Again, plans for renovation were discussed in 2006, 2008 and 2011, but there was never any movement besides the installation of new windows and the restoration of electricity inside the building. By 2016, while Moroun flirted with the idea of moving some of his family’s business inside the building, it was revealed that in 10 years and the Mouroun family had spent about $12 million for the electricity, windows and new elevator shaft in the structure.

Yet, nothing really happened in the building until 2018, when there was real hope for a future in the station. In March of 2018, it was revealed that Ford Motor Company was in talks to purchase the structure, a deal that was later finalized a few months later.

From there, the rest is really history up to this point. Ford plans to revitalize the station and surrounding area into a new mobility hub for innovation, ushering in a new era for Michigan Central Station.

Phase 1 of Ford’s redevelopment began in December 2018, while phase 2 began in May 2019. As of yet, the construction process saw the enforcement of structural columns and archways, masonry restoration work, retiling work and rebuilding of some aspects of the steel structure.

The entire restoration project is slated to be completed in 2022, 109 years after the tower’s chaotic opening and 34 years after its tragic closure. While there is not yet a plan to reconnect passenger rail to the station, that idea is on the table, given whatever happens with Metro Detroit’s Regional Transit Plan.

In the meantime, the station will get new life in the form of new mobility solutions. Read more about the planned use of atrium space for drones, the mobility platform, or take a peek inside Michigan Central Station itself through some of our previous work.

As always, subscribe to our newsletter for all things Detroit and more.