A Statue Arrives to Commemorate a Detroit Icon 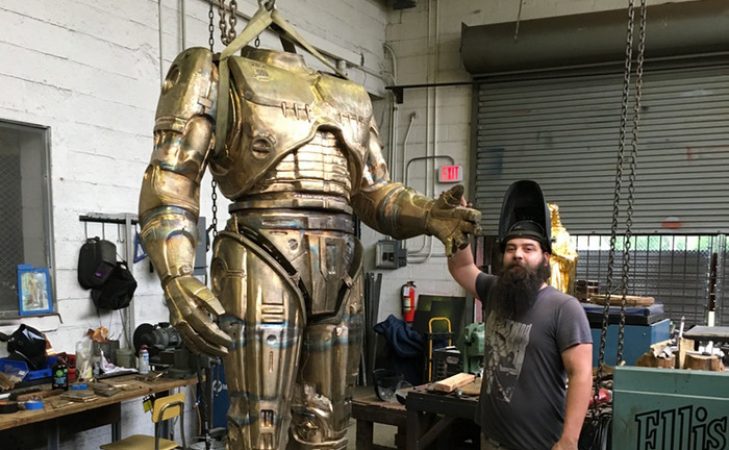 Why doesn’t Detroit have a statue of Robocop? In 2011, that’s the question a highly under-credited gentleman from Massachusetts posed to then-Mayor Dave Bing in a now-famous tweet. Rocky, he argued, had one and look at the good it’d done for the City of Brotherly Love.

I mean, would Philly even be on the map if it wasn’t for the crowds of tourists running up and down the steps of their art museum?! Every. Single. Day. Probably not.

Apparently, the mayor would disagree with me, as he promptly killed the idea:

“There are not any plans to erect a statue to RoboCop. Thank you for the suggestion,” stated Bing.

What happened next is equal parts excitement and criticism but can be summarized as ‘Never tell a Detroiter no. Especially to a question they didn’t ask.’

No one asked the Mayor if they could build a Robocop statue. He just took it upon himself to speak for the entire city and declared there were no plans. So, Brandon Walley and Jerry Paffendorf took the mayor’s casual slight as a challenge and made plans by promptly starting a Kickstarter campaign, Detroit Needs A Statue of Robocop!

This was the era of Michael Symon’s Roast being the IT downtown restaurant, Paffendorf’s LOVELAND technologies selling inches of land and Gilbert quietly amassing his first buildings downtown. This was the moment of urban farming, clandestine dinners in forgotten buildings and all sorts of crowdfunded art—most of it organized by Paffendorf and his partner, Mary Carter. 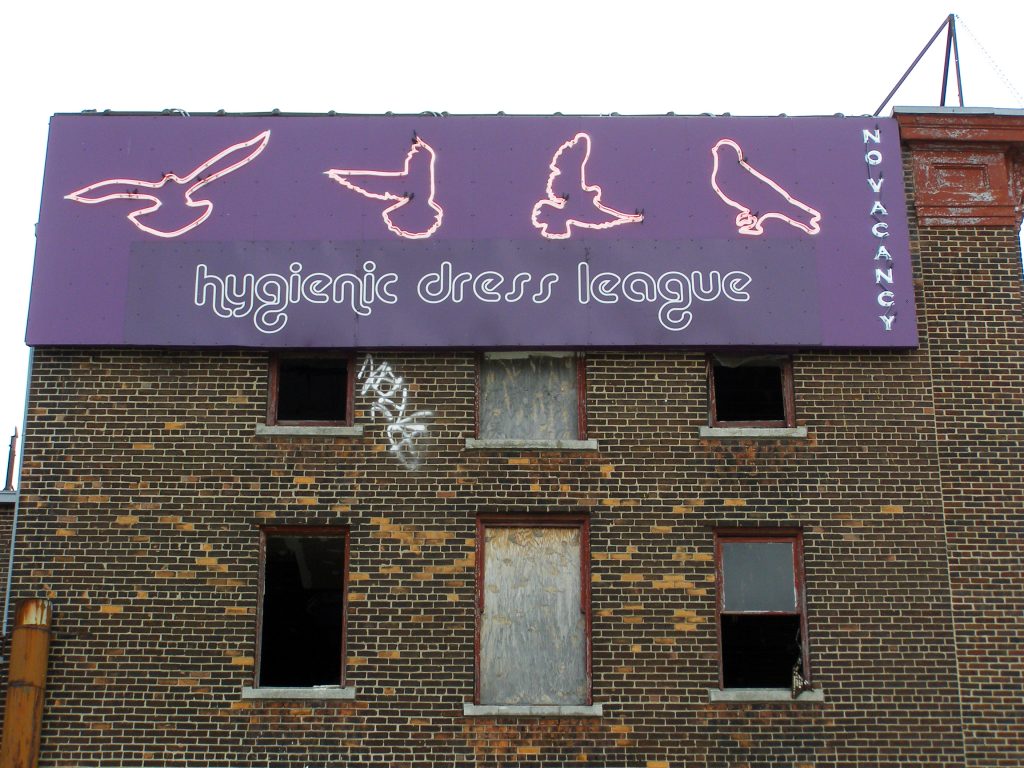 Among these works was a “No Vacancy” neon sign by artist duo, Steve and Dorota Coy aka the Hygienic Dress League, that hung on the Roosevelt Hotel.

The hotel had long been vacant. The sign’s contrast was playful, if not hopeful. In hindsight, the message is cutting.

At the time, there was a totally unconfirmed rumor floating of a friendly bidding war between restaurateur Phil Cooley and Paffendorf to purchase the hotel in the city auction.

Cooley is famous as the owner of Slows BBQ, the creative space Ponyride and showing up at any and every community gathering where someone needs a Caterpillar. Paffendorf’s resume boasts myriad creative projects, including the Kickstarter for said “No Vacancy” sign and, in recent years, mapping out all of Detroit’s saleable land.

Considering both parties track records, either would have been a win for the city.

In the final moments of bidding, however, the gentlemen behind the Russell Industrial Center, and the notorious Greektown lofts, blew both parties out of the game.

After a few shoddy attempts to prove they weren’t complete slumlords, all construction personal disappeared and the hotel just sat vacantly. As it still sits.

But for a moment it was lit up in neon, surrounded by a crowd of people cheering on the fruits of their collective, if not labor, hard-earned dimes.

In six days, the Robocop Kickstarter raised over 60k. To quote the NYtimes 2011 article, ‘Calling on Robocop to Help Detroit’:

“More than 1,600 people agreed to chip in an average of $17 through a website, DetroitNeedsRoboCop.com, and half of the target amount was contributed by a San Francisco company that specializes in turning fake consumer products from movies and television shows into reality. Not coincidentally, the company, Omni Consumer Products, shares its name with the villainous conglomerate that tried to turn a dystopian Detroit into Delta City in the 1987 science-fiction film. 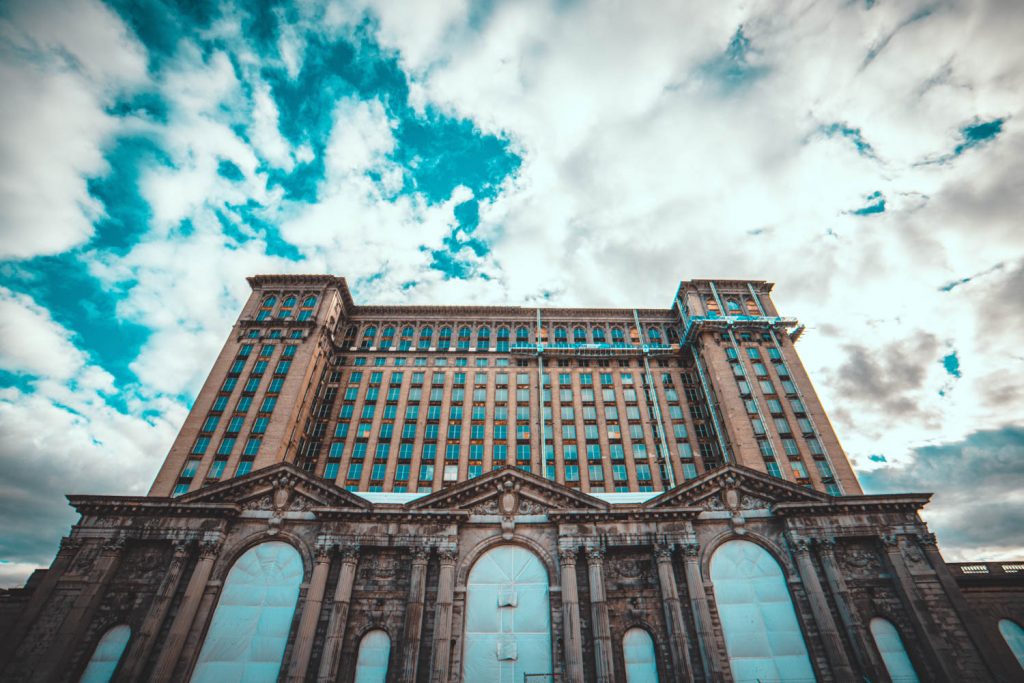 The campaign’s organizers intend to put the statue on land owned by the Imagination Station, a nonprofit group whose interests include public art, near the derelict Michigan Central Station. They are exploring other sites if the city agrees to sign on.”

Despite the success of the campaign, critics cited it as irresponsible. In a city with so many bigger problems—poverty, blight, etc.—the enthusiasm over a giant statue was, well, silly. To paraphrase the most repeated complaints.

This argument is like telling a rich man he should be spending his money on soup kitchens or homeless shelters instead of giant Kaws statues. Which sort of makes sense? Except not at all.

That logic doesn’t change the power dynamics of the situation. It only makes an opportunity for a hero.

But, alas! None of that mattered. The funds were raised, and Detroit was getting a Robocop statue. Critics be damned!

In 2012, the year following the Robocop campaign, Heidi Ewing and Rachel Grady, released their documentary, ‘Detropia.’ The film, whose working title was “Detroit Hustles Harder”—LOL—features ‘No Vacancy’ sign creators the Hygienic Dress League. 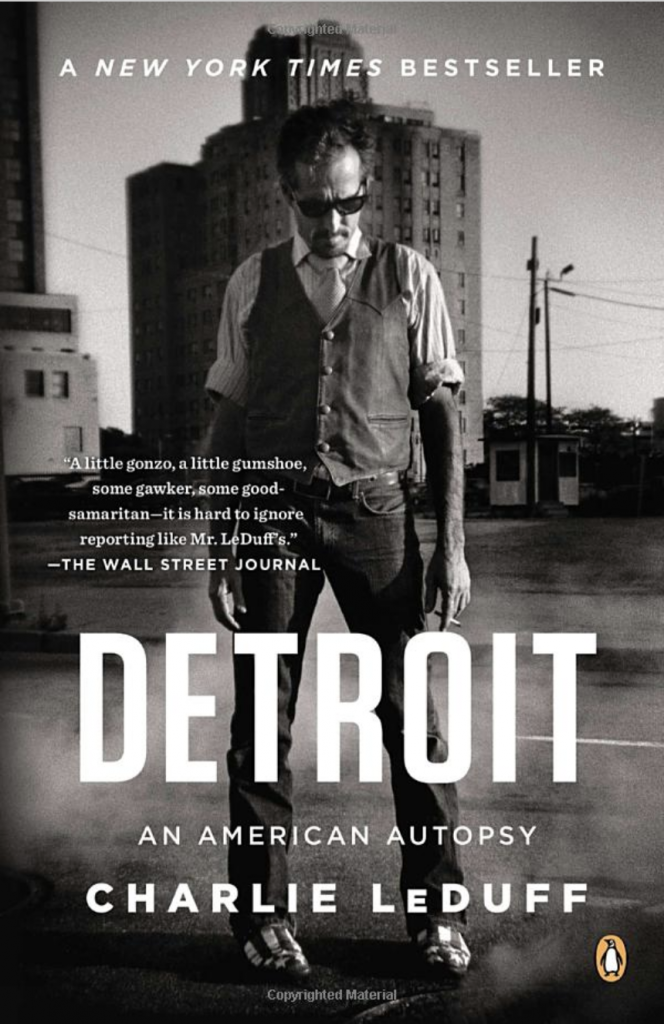 This is the same year Rolling Stone writer Mark Binelli released his book-length meditation on the city, ‘Detroit Is The Place to Be: The Afterlife of an American Metropolis.’

The following year Charlie LeDuff released his sensational, if not sensationalist, book ‘Detroit: An American Autopsy.’

Today, these works serve as a time capsule for a specific moment in Detroit’s long, ever-changing and complex history.

They speak to hardship, blight, and perseverance—but, most strikingly, they speak to a narrative of self-sufficiency: Detroiters of all backgrounds taking matters into their own hands to create public works of art but also gardens to feed entire communities and schools that answered the specific needs of those communities.

Before Shinola and Bedrock came to town, this was Detroit looking inward for support, as it had been looking for years.

A time when the word’s “The Dream Is Now” overlooked the train station, sprawled in colorful lettering across the roof of the ramshackle house that was half the Imagination Station—Robocop’s proposed home.

Built in 1880, this house was one of two houses, Lefty and Righty.

Beside Righty and Lefty sat the Roosevelt Hotel. Adjacent to them sat the Michigan Central Station. For a time, these two fire damaged homes were the HQ for the Imagination Station, a non-profit that seemed to pop up overnight and whose mission statement seemed to simply experiment—but was officially:

“To construct a creative campus in Detroit built on community, technology, sustainability, and the arts.” 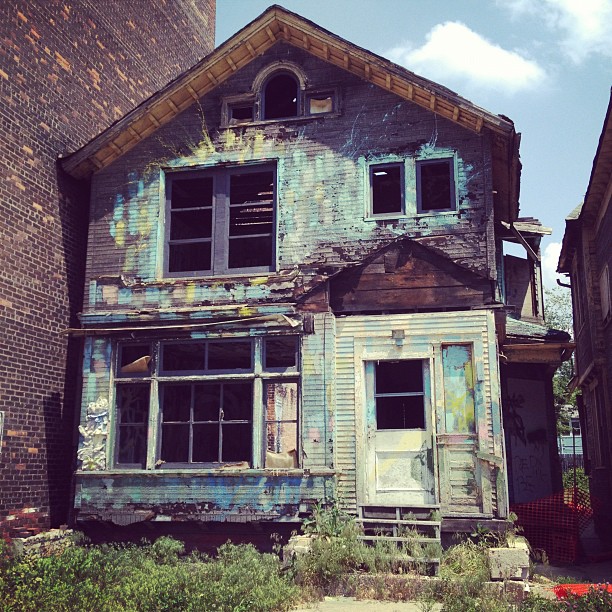 There were concerts, sculptures, a putt-putt course. Perhaps most famously, Lefty, the more damaged of the two houses, became an installation work by artist Catie Newell. Using pieces of its damaged structure, the house was sort of built-in on itself. If that’s not a metaphor for regeneration and self–sufficiency, then I don’t know what is.

Somehow it was crated up and sent to Grand Rapids, where it was recognized by Artprize. Mind still blown.

All of this perfectly captured the zeitgeist of ‘We bought these houses for less than an automobile, so let’s try some things.’ A vision, worth pointing out, eloquently and, I will argue, made famous by, Toby Barlow’s 2009 Op-Ed for the NY Times, For Sale: The $100 House.

In this piece Barlow traces the origins of the Imagination Stations predecessor in the genre of artist altered homes, in Gina Reichert and Mitch Cope’s Power House Productions.

Since we’re on the subject: a moment for reflection upon the Heidelberg Project.

All these projects got their footing years before Ford bought Michigan Central Station, bringing with them computer renderings of white–collar workers and autonomous vehicles circling one of Detroit’s most historic neighborhoods.

In these days, some of the station’s biggest fans called themselves urban spelunkers, scaling its bones for photographs and sunset views—while its biggest opponents pushed for its demolition. 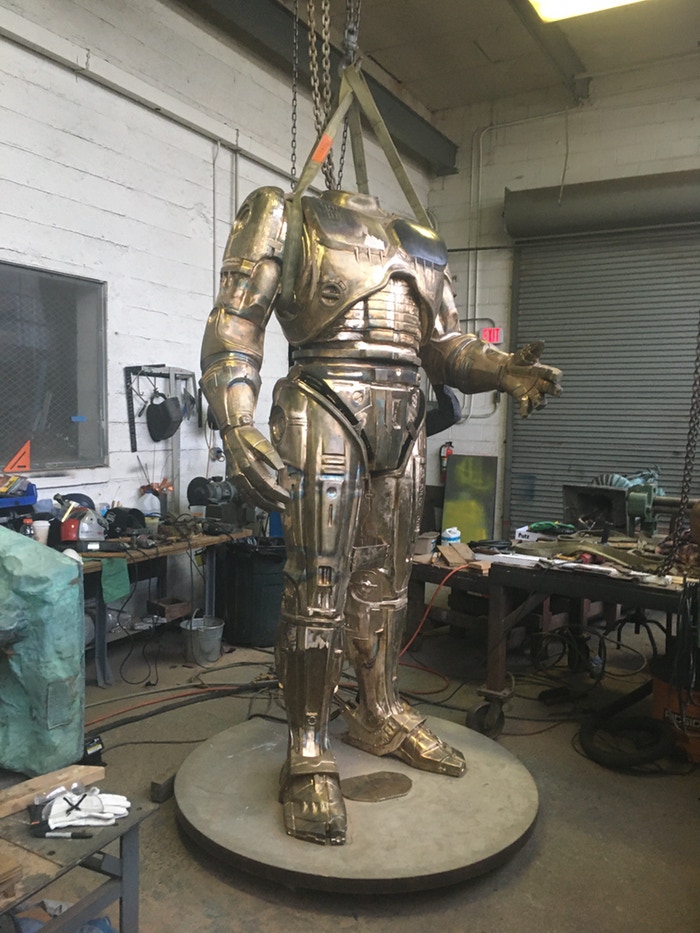 Fact: it takes nine months to make a human baby and nine years to make a Robocop.

After nearly a decade of updates, false starts, manufacturing issues, more updates, copy-write issues, more updates and a long period of silence, it has been announced that—fingers crossed—Robocop is on his way to the Michigan Science Center, to be publicly displayed for all to see and enjoy,

This time we have pictures and facts to prove it. Here, we quote Popular Mechanics’ 2020 piece, ‘Detroit’s Glorious Robocop Statue, Nearly a Decade in the Making, Is Almost Done’:

“The statue, now finally nearing completion, is 11 feet tall, with a base that weighs a half-ton on its own. The whole RoboCop body is made of bronze and will be finished with a dark gray patina that mimics the original RoboCop costumes worn in the movies. Those costumes were made of fiberglass, foam, and plastic, and even so, they weighed at least 50 pounds. Each movie had a new spin on the suit, from different paint colors to better mobility.”

So, what’s next? But more importantly, what happened in–between?

THE DREAM IS NOW

In the years between Robocop’s inception and birth, a lot has changed.

The Imagination Station suffered another fire, one of the houses was demolished, and the nonprofit eventually dissolved. The silver lining is that the remaining home was sold to a very cool family and is now a single–family residence.

In the rest of Corktown, as in many parts of the city, rents have risen, and property values have skyrocketed—pushing the DIY ethos beyond. 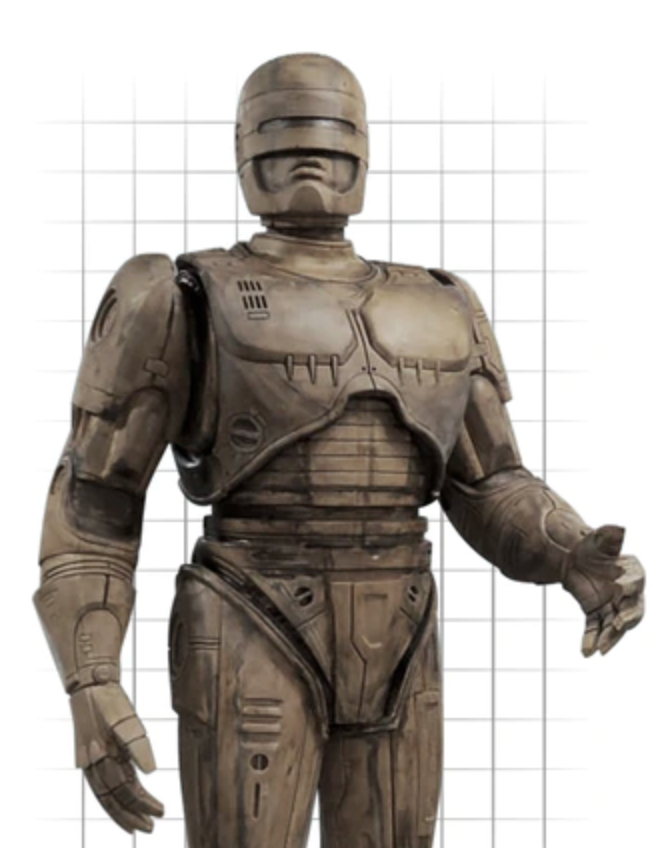 People have evolved and matured. Paffendorf himself has become an outspoken voice of the foreclosure crisis. He has taken his talents for creative problem solving and real estate to help the City and its people utilize empty parcels via makeloveland.com.

Downtown’s Vegas-style blossomed overnight—its wig stores, quirky boutiques and empty storefronts have been replaced with luxury hotels, upscale restaurants, and mid-level retail. The Hudson’s site, that was once a parking lot, is now a swimming hole forever under construction.

Emanating from downtown out are the messengers of change: pedal pubs. Their boisterous presence bobbing across the trendier parts of the city like the winged things from the Wizard of Oz.

“Pay no attention to that man behind the curtain…”

The controversy that once surrounded the crowdfunding of 60k for a statue has faded into one billionaire imposing his art collection on the downtown population. The question isn’t should or shouldn’t he, but do you or do you not like the Shepard Fairey?

Not that there’s anything wrong with public works of art. The difference, however, is that when Robocop is unveiled over one thousand people can look at it and say “we made that happen.”

Shoutout to Philadelphia. You are a beautiful and culturally rich city, and I was totally teasing you Rocky. Like Detroit, you have so much to offer beyond any statue. But, sometimes, it’s the small, seemingly irreverent things that draw us together in powerful ways.