Sneak Peek Inside the Renovation of the Book Tower

Adapting an Historic Office Building to a Modern Mixed-Use Space is Quite an Undertaking. Detroitisit Got a First Glimpse Inside the Book Tower 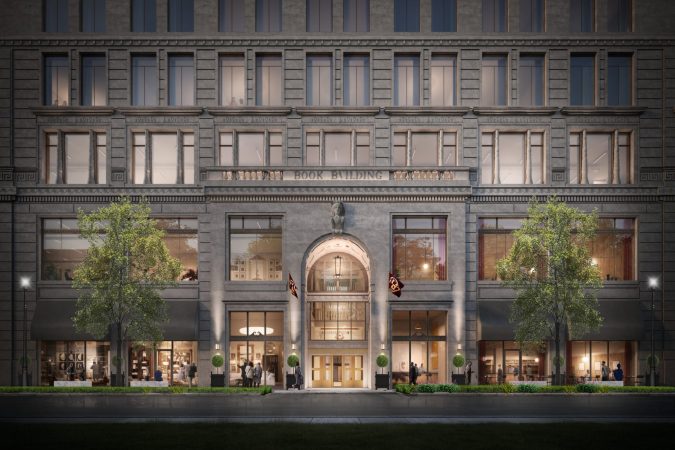 As renovation begins rounding the corner toward the finish line Detroitisit caught a glimpse into the Italian Renaissance masterpiece that is the nearly century-old Book Tower Building in downtown Detroit.

Book Tower was designed by Louis Kamper, a legendary 20th-century architect responsible for designing over 100 commercial and residential structures in Detroit including the Book Cadillac Hotel, the Washington Boulevard Building, and more. The designs of Kamper are a reason for Detroit’s position as having the collection of pre-World War II residences, commercial buildings, and skyscrapers it does. Originally completed in 1926 the iconic Book Tower landmark was briefly the tallest building in Detroit, standing 475 feet and rising 38 stories. From its opening through the mid-1970s, the Book Tower housed hundreds of offices and remained a prestigious address on Washington Boulevard. 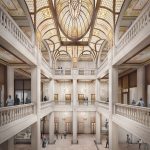 Purchased by Bedrock in 2015 for a reported $30 million, restoration is expected to be complete in about one year from now.  The $313 million project includes the tower and the adjoining 13-story Book Building. The spaces have sat empty since 2009.

This landmark will offer 118 ROOST Book Tower extended-stay hospitality suites across 4 floors, 229 residential units across 27 floors, 85,000 square feet of retail and office space, two restaurants, and a 4,500 sq foot event space.  Detroit’s newest 1,400 sq. foot rooftop bar will also sit atop the 13 story Book Tower Building. An art glass skylight – the centerpiece of the original design – overlays the event space and will soon gleam for the first time in decades. 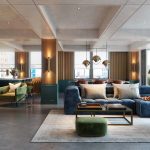 Led by T. Morris, senior project coordinator for Bedrock’s architecture firm, the tour of the renovations’ progress highlighted several key components including both residential and hospitality units, the new rooftop bar, a breathtaking ballroom, and the grand lobby. “It’s been a labor of love,” said Morris. “I’m proud to be a part of such an important project for our city.”

To realize the enormity of the restoration up close is awe-inspiring. To comprehend the level of detail, labor, dedication, craftsmanship, and collaboration involved is humbling. 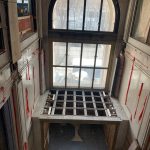 RENOVATION OF THE GRAND ENTRANCE AND LOBBY OFF OF WASHINGTON BLVD

Exterior restoration is near complete and encompasses a stunning copper roof restored to its original beauty, terra cotta ornamentation including caryatids supporting an ornamental cornice along Washington Boulevard, and full restoration of the original limestone and masonry façade. A whopping 2,483 historically accurate windows have been replaced and installed. Over the past year, work has turned to the interior.

Family-owned, 105-year-old Russell Plastering out of Ferndale is restoring the plasterwork, which partially involves making new molds to recreate the intricate patterns found on the ceilings, moldings, and throughout the entire building.

New Jersey Based Femenella & Associates has taken on the estimated one-year-long restoration of the awesome third story glass atrium dome/skylight, which will entail restoring and partially replicating the framework, glass, and 7,000 jewels. They’ve constructed a full-scale model of the dome in their facility and are applying most of the same original methods used to create the plates that make up the structure. “Simply cleaning the stains left from nicotine is a project in itself,” said Arthur Femenella, vice president of the company. 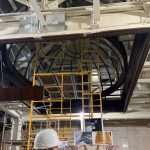 “Adapting what was once an office building to a modernized mixed-use space while giving due justice to its original state is the biggest challenge here,” said New York ODA Architecture firms Intermediate Architect, Akshay Surana.

Residential units will average 795 square feet and range from studios to two-bedroom  units with an office. ROOST extended-stay suites, operated by Philidelphia-based Method Hospitality, range in size (the model included in the tour ran 1,240 square feet), and are fully furnished with ample natural lighting and accommodating layouts.