Co Owner and Chef Nina Paletta Discusses Past, Present, and Future in an Interview with Detroitisit 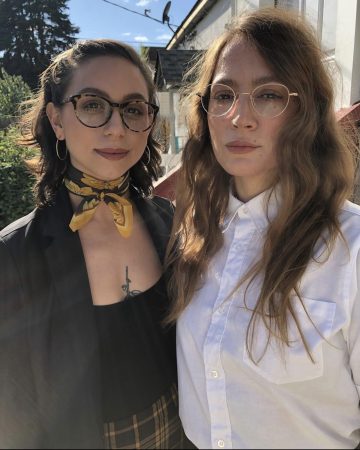 Since 2018 Street Beet has been one of Detroit’s favorite pop-up teams. Their delicious, vegan takes on classic fast food items like Taco Bell’s Crunchwrap Supreme and McDonald’s Filet of Fish have kept Detroiters—vegan or not—returning for more. By the end of 2019, Street Beet settled in Third Street’s kitchen as a semi-permanent pop-up restaurant.

Now, as the pandemic’s effects are continuing to slow in the United States, Street Beet’s co-owners and chefs Nina Paletta and Meghan Shaw express their gratitude that they are still able to serve Detroit. Paletta considers them as one of the lucky ones and is excited to talk summertime, Detroit’s ever-moving food scene, and her fav vegan snack in the city.

WHAT WAS THE TRANSITION FROM POP-UP TO WORKING OUT OF THIRD STREET’S KITCHEN LIKE FOR STREET BEET?

Paletta: The first year or so we went from doing a pop-up every week to suddenly we were doing two, then we were doing sometimes three. Our first summer [2018] was super busy, we were just making a name for ourselves…. It was all very all over the place, all the time—high energy—new venus all the time. So I’d say that the first year/year and a half was just straight madness but it was a lot of fun and a huge learning process for us! During that time is when we really built our following, I would say.

So, fast forward to now, we have been inside Third Street Bar for about two years. We started renting their kitchen in 2019, and at first, it was kind of just our like commissary kitchen, and then we ended up opening up full-time there in November of that year. A lot has changed, in kind of a dramatically short period of time if you think about it.

WHAT ARE YOUR VIEWS ON DETROIT’S VEGAN FOOD SCENE?

Paletta: I would say compared to ten years ago, it’s incredible. I find it pretty hard to believe when we’re not listed in the top 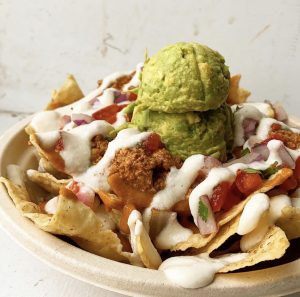 cities in the U.S. for vegan travel, and I think it’s just because it might not be super all in your face. Like we only have, I think, three vegan—entirely vegan—restaurants here, a couple of vegetarian, vegan-friendly.

But the thing is, most, if not all, of the restaurants that are frequented heavily by I’d say your average person in the city has added vegan menu items and have been really creative and thoughtful with them compared to how it was in the past where everyone just threw a black bean burger or something on their menu to make up for it. It’s been a lot more intentional. I’d say we have a pretty good scene here.

HOW WAS IT ESTABLISHING A ROUTINE DURING THE PANDEMIC?

Paletta: It was super difficult. I think… the general sense of fear in the community-made people sort of try to come up with their own set of rules and values and things that they felt comfortable with and pull from many sources…. I think that caused a lot of confusion overall with what everyone thought was the right thing to do.

I think it just kind of put us all through shock. And each day felt like we were given a new set of rules or guidelines and trying to adapt and do what’s right not only for our employees, for our customers, for our business, it just felt like a constant tug back and forth and we did our best, and we tried to stay on top of it.

WHAT’S YOUR FAVORITE PLANT-BASED SNACK IN THE CITY?

Paletta: Mmm, snack? Cold Truth ice cream. They’ve really nailed it, they have tons of crazy toppings, awesome flavors that are always rotating, and they don’t even necessarily coin themselves as a vegan business, which is really cool. It’s just they used to offer dairy now they only offer plant-based and they just make it super approachable and delicious for everybody.

HOW, IF AT ALL, HAS THE PANDEMIC CHANGED YOUR VIEW OF THE FOOD SCENE?

Paletta: It’s definitely made me realize that it’s more of a necessity than I originally thought…. I mean a lot of people out there don’t enjoy cooking, maybe they don’t have the tools in their kitchen to do so, they’re really busy, they don’t know how to transition to a vegan diet but they want to…. I think it’s super vital for restaurants like us to exist in communities where you just don’t see a ton of variety all the time.

I think that restaurants, in general, are just really important to the community. Like for example… our clientele is extremely diverse, and that’s something that I don’t feel like you often see in most restaurants run by young, white women, and it’s just something that we didn’t necessarily expect, but we’re really proud of and we’re really grateful for because that means that we are doing something right. We are offering something for everybody. We’re just approachable in that way and that makes us happy.

WHAT DO YOU LOOK FORWARD TO THE MOST IN STREET BEET’S FUTURE?

Paletta: There’s a lot of things, but I think one would be expanding our menu like there’s been a lot of food that we’ve been really interested in taking on, and just with the size of our space, the storage, our staff—it’s just we’ve been a little bit limited so we haven’t been able to like grow in that sense.

And then personally, I really miss interacting with people on a more personal level, since we’re doing mostly carryout. Like people do walk up to place their order, but we’re not necessarily checking in with them, having that face-to-face interaction, and I really miss that. So I’m looking forward to people being more comfortable with that again and being able to serve table-side and kind of get a feel for how everyone is enjoying their experience.

WHAT DO YOU LOOK FORWARD TO THE MOST THAT ARE NOT FOOD RELATED IN THE SUMMERTIME?

Paletta: Well, Detroit is known for its dance music scene, and that’s something I’ve been a part of for such a long time…. I mean 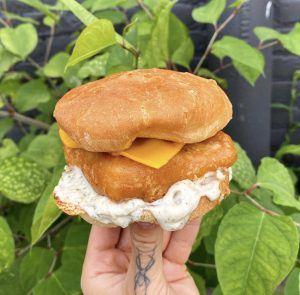 just going outside with people in general and like gathering at spaces with a bunch of people that you know and a bunch of people that you don’t know and just feeling that energy and that sense of community is something that I think is really unique in Detroit…. It feels like such a small city but there’s so much creativity there’s so much energy, and yeah, I just miss that dynamic.

Meghan said she’s not the most social person, so she would have to say she’s looking forward to not being worried about friends and family getting sick all the time.

WHAT IS YOUR FAV DISH THAT YOU SERVE?

Paletta: That’s really tough. I think our Filet No Fish is the best menu item we’ve ever created and that’s a spin on the McDonald’s Filet of Fish. And that’s something we really rotate on special because due to the size of our kitchen, our staff, it’s kind of difficult to maintain. If we had a larger facility it’d be a little bit easier but it’s definitely something we just bring in from time to time for a special.

As the weather continues to warm both Paletta and Shaw are excited to invite Detroiters to their space, not only for carryout but also for seated service both in their indoor and outdoor seating. Check out their menu, stop in to grab a drink and some delicious vegan food, and enjoy Detroit’s immaculate summer vibes!