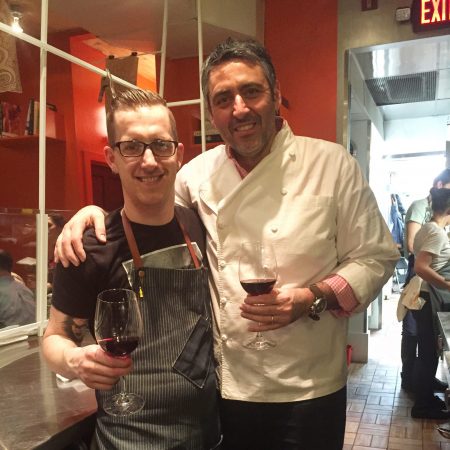 I’ve been in LA a month, and most of the people I’ve spent time with—in person or on the internet (it counts) are Detroiters. Most of us never connected in Detroit. It’s a city small enough to allow one to think they know everyone—I run into him everywhere—while big enough to avoid moving beyond the acquaintance stage. In LA, by contrast, people seem happy to run in small circles and avoid strangers at all costs. And with eleven million people, they can afford to do that.

Detroit, here’s some universal gold: take the time to connect with a stranger and you’ll often be pleasantly surprised. Example: Chef James Rigato. He’s a chef. I work with chefs. Our paths have crossed, but I never took time to comprehend the weight of his achievements or the general awesomeness of his personality. Or, at the very least, share a drink with him. Was I intimidated or annoyed by some perceived slight? Maybe. Either way, I regret not taking the time to engage in conversation earlier.

In Part One of this series, I interview Rigato. In Part Two, he interviews his friend and mentor, Chef Luciano Del Signore.

If you’re not familiar with these names, take the time to visit Bacco or Mabel Gray—even if it means booking a trip to Detroit. No excuse. Pete Wells did it. If you are already familiar, forget about that too.

These two have insightful things to say and Rigato’s Trick Trick reference is spot on.

“I’ll probably cook until I burn out then go back to washing dishes.”

CV Henriette: Was there a definitive moment when you knew you wanted to be a chef?

Chef James Rigato: I first turned to restaurants because they were a source of income for a 14-year-old kid who wanted independence and opportunity. I washed dishes and flipped pizzas for a few years unsure of a real plan. I didn’t realize the potential of the industry until I was sixteen and working alongside Schoolcraft culinary students. One cook named Ben brought in the French Laundry Cookbook and introduced me to Thomas Keller. I had no idea what was going on. It might as well have been a book about deep space. I was fascinated and hooked.

CVh: Was there another career? If cooking wasn’t an option, where would you be?

CJR: For a time I wanted to be a firefighter. Nowadays, I can see myself doing PR or developing content for large scale food and beverage companies. I’ll probably cook until I burn out and then go back to washing dishes.

CVh: Luciano is considered a mentor to many Detroit rising chefs. How did you and he connect?

CJR: My grandfather was a regular at Fonte d’ Amore and a friend of John Del Signore (Luc’s dad). So I grew up with tremendous respect for the Del Signore family. When Luc opened Bacco I was a customer and eventually a kitchen hand—mostly helping out Anthony Lombardo who tried to date my sister back in the day. Anthony and I became close at Bacco, and it wasn’t until I opened The Root that Luc and I started getting closer. Now we’re three peas in a pod. Luc and I have similar outlooks on the industry and work ethic. We’re kindred spirits.

CVh: Big things tend to happen when great minds connect. How has your friendship with Luciano impacted you as a chef?

CJR: Luciano has opened my mind as an entrepreneur and as a student of Italian cooking. His passion for real cooking and his lust for life are inspiring. I can’t tell you how many times we’ve done dinners together or cooked at events only to go back to his house with a group of people and Luc to end up back at the stove making pasta all’amatriciana for everyone. His pursuit of hospitality and the desire to nurture through food are unparalleled.

CVh: Are there experiences found only in Detroit that have influenced your cooking?

CVh: What’s the magic you believe makes a restaurant successful?

CVh: One word response: What does the guest come for the ambience or the food?

CVh: That was my editor’s question. Having worked with chefs, it made my heart explode, so I am following it up with: Why?

CJR: Well for one I’m not a fan of absolutes. So one word for why people dine out is not of interest for me to summarize. No two people are the same and that’s a good thing.

CVh: Score the overall ambience/food rating of the Detroit restaurant scene. Site examples, if you’re in the mood. What city is killing it?

Detroit food has an identity. My fear is that too many property developers rush to develop a “concept” that is soulless and profit driven, leaving the average diner in the dust. We need to respect the artisans in the field and respect the dollars the customers spend. The best food scenes in America have respect for neighborhood, style, and standard. We should demand a higher standard for the average restaurant trying to cash in here. We need Trick Trick to start a culinary “No Fly Zone”.