Behold! Charmed Out of La Canasta and into El Club 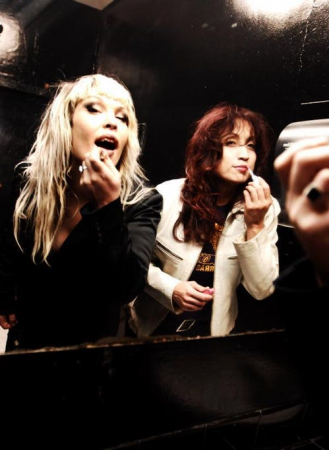 The Detroit Cobras. Do they need an introduction? Perhaps Detroit’s most famous ‘cover band,’ building a unique sound from the blocks of such greats as Otis Redding and Little Willie John to famed Motown girl groups like the Shangri-Las. Which is to say they’ve made a career of improving on perfection. Forming in the mid-1990s, they helped—and continue to —define the Detroit garage rock scene.

At the core of its rotating cast of characters are two fierce–as nails–women, vocalist Rachel Nagy and Mary Ramirez—the latter described by Third Man Records as “one of the greatest guitarists to ever come out of Detroit.” Ever. From Detroit, the city of Jack White and Fred “Sonic” Smith. Those are big words.

To say we’re humbled to have caught up with Rachel and Mary, however briefly, is a vast understatement. Their level of cool is beyond intimidating. Also, there is a distinct possibility they may be vampires. After 25 years, they are sincerely, absolutely, and mind blowing-ly hitting it just as hard as they did on day one.

Which bodes awesome for those of you headed to their show tomorrow night, Saturday, February 22nd, at El Club.

DETROIT COBRAS: The band was formed through alcohol, determination, and a good dose irresponsibility.

DC: Dudes that we like to hang out with.

DC: Burning dumpster fire with all our friends. That was fun as hell.

CVh: HOW HAS THE SCENE IN DETROIT & BEYOND CHANGED SINCE YOU STARTED MAKING RECORDS?

CVh: HOW HAS YOUR SOUND EVOLVED OVER THE YEARS?

DC: The Muppets. (This is a real answer.)

DC: Our own Egos & the Muppets.

WHAT DO YOU ENJOY MOST ABOUT BEING A MUSICIAN?

DC: The push and the pull, the camaraderie and the ability to drink while working with our fans that we love.

WHAT’S THE MOST TRYING ASPECT OF THIS PATH?

IF YOU WEREN’T MAKING MUSIC, WHAT WOULD YOU BE DOING?

Mary: Being fanned by peacock feathers.

DC: Always have fun. Do what you. Love, but always be practical.

Putting the People First When it Comes to Sustainable Urban Design